The big news in sport this week has to be Jarryd Hayne's new contract with the San Francisco 49ers. The former NRL star will be joining the American team as an undrafted free agent, and as he heads stateside to test his skills, we're thinking it may be time to get to San Francisco to see just what all the fuss is about.

The NFL has steadily gained a following over here in Australia with many fans making the trip across the Pacific to catch a game in person. This includes Flight Centre Consultant, Kahu Patira. On a holiday in San Francisco last season, both she and her husband managed to score tickets to a 49ers home game in the new Levi's Stadium in Santa Clara.

What followed was an experience she won't soon forget. 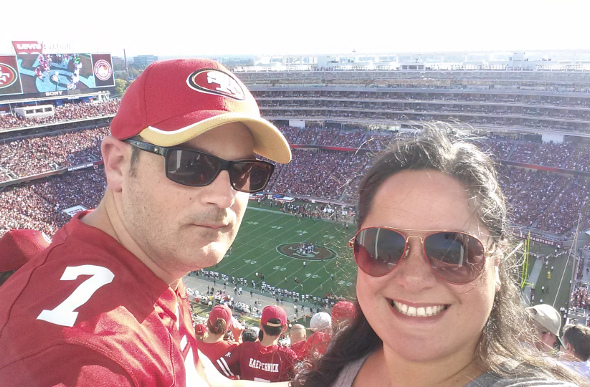 Flight Centre consultant Kahu Patira and her husband at the game. All photos by Kahu Patira

How did you get to the stadium?

We drove, in our trusty hire car, from San Francisco down to Santa Clara. There was much hype surrounding this second round (2014) NFL game as it was the 49ers' first home game at their brand new stadium. Levi's stadium had replaced the much-loved Candlestick Park. Instead of the normal 20-minute drive from San Fran everyone now had the hour and a half journey down to Santa Clara.

Did you tailgate when you went to the game? How did you find that experience?

It's funny; we thought we were so prepared heading to the game (for what we thought to be) really early. We wanted the extra couple of hours to park the car, check out the stadium game shop for 49ers memorabilia and grab a bite to eat. As soon as we hit Santa Clara we were passing local businesses that had their car parks filled already with 49ers fans BBQing up a storm.

Marquees, camp chairs, BBQs and 49er fans were everywhere. People must have been there since the early hours of the morning setting up, and here we thought we were so early! We hadn't even reached the official stadium car park tailgate parties I was so eagerly anticipating. I was so impressed by the dedication of these fans.

After we parked the car we walked through a sea of red and gold. We were in tailgate heaven. The parking lot was set up much like the car parks outside the stadium. 'Niners logos everywhere. Beer, BBQs and hyped-up, excited football fans probably going to their first game of the season.

People were cheering and yelling out support for the 'Niners. I felt like we were locals as we were getting pats on the back just making our way through the celebrations in the car park to get to the entry gates. There were trumpet noises, music blaring, 'Niners chants ... Every direction you looked it was one big party. 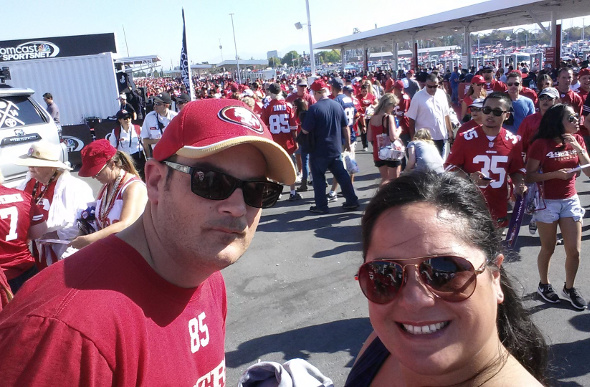 Once you got in, what was the atmosphere like? Did the stadium sell out?

As soon as we arrived at the stadium we got chills looking at the new imposing structure. It stood so high in the fairly flat and new developed area of Santa Clara. The game was obviously a sell out being the first at the new stadium. Although we were up in the bleachers, we were stoked to even be able to get tickets to attend this inaugural game.

We were both literally like kids in a candy store. It was a feast for the eyes pulling into the stadium car park. All of the American movies could never have prepared us for what we were about to experience.

Who were the 49ers playing?

We had a handful of their supporters up near where we were seated. The banter was really witty between them and the 'Niners fans. Back and forth in a jovial manner. It kept the laughter and fun going.

Were the home fans especially passionate? Face paint and cheering like crazy?

The fans were crazy passionate. They had chants for their team. There were people not only dressed in the 'Niners colours and sports gear of red and gold but dressed up in costumes.

My favourite was a guy with a Super Bowl ring on his head as a hat and his face painted gold with the 'Niners jersey and beads around his neck. Totally pimped out. 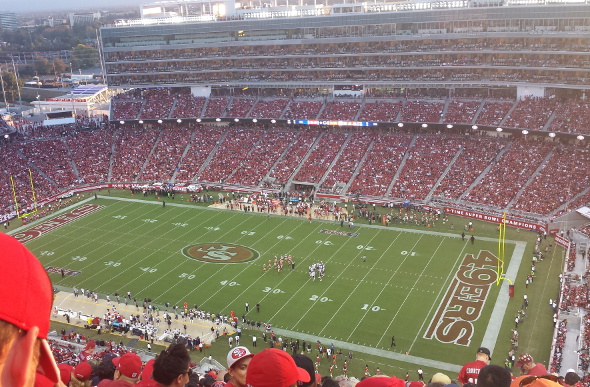 Eating before or after the game? A Moveable Feast: San Francisco's Best Food Trucks

Kaepernick: the 'Niners quarterback was probably the most popular top at the game. Everyone loves the quarterback!

I understand your husband is a huge sports fan. What was it like for him?

David is a big sports fan. We've travelled all over the world together and have been fortunate to attend the Olympics and Commonwealth Games, EPL games, all the codes of footy in Australia, Wimbledon, Aussie Tennis Open, golf, baseball, basketball, ice hockey ... the list goes on.

He is really into the play and in the moment of the game. He's not a massive 'scream at the top of your lungs' sort of guy. He will usually state something about the play and continue watching the game like a nervous supporter.

How long did the game run for?

The game ran for three hours. Just when you think it's close to finishing, time is extended. It's a crazy game to get your head around.

How did you find all the breaks in the game? Did you have to keep yourself entertained?

There was so much entertainment going on. I'm not even American and the national anthem almost brought a tear to the eye as everyone was singing and so proud of their nation. One entire part of the crowd turned over cards to create a massive American Flag on the far side of the stadium. Such an amazing view. It really was a sight to behold.

The half time show was Snoop Dog. Hello ... I had to pinch myself. He put on a great show. We can't even get a class act like that for an AFL or NRL Grand Final and this was just an opening season home game.

Of course the cheerleaders kept the breaks entertaining. Music was so great and loud. People-watching alone filled the gaps between plays along with the banter between the opposing supporters. 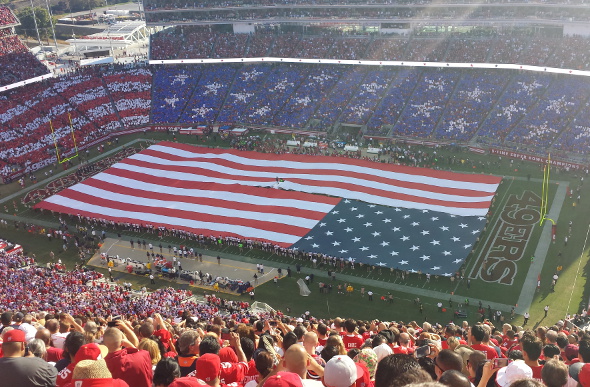 Did you manage to sample the stadium food? What was available?

On the way to our seats we grabbed a couple of hot dogs and Gatorades. We were literally at the very top of the stands. It made for an amazing view.

What was your experience after the game? Everyone rushes out at once; did you have trouble getting out?

We got interviewed by the San Fran Bayside News stating how crazy it was to clear out of the car park. Pasted it all over Facebook of course. Our 15 minutes of fame.

There was a train that went from Santa Clara back up to San Francisco, but we had driven as we were off to Carmel next on our road trip from San Fran to LA, stopping along the way. 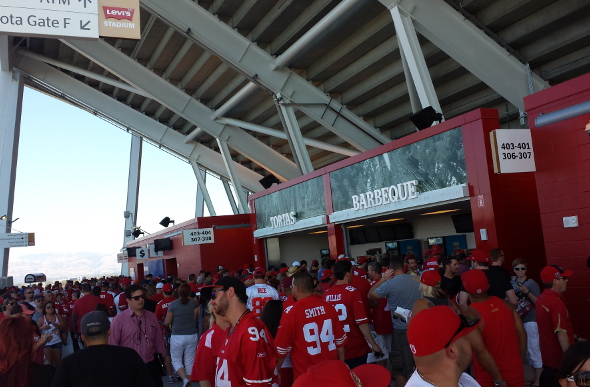 A couple of the food options at the game. Barbeque was clearly not overlooked!

How did the game compare to attending a rugby league game or another Australian sport?

AFL and NRL don't even compare to the pomp and pageantry of the NFL. It is over the top in a good way. From the opening national anthem and the players' god-like statuses, to the half-time entertainment and the over enthusiastic supporters.

The colours alone were so amazing. All you could see was red. The advertising, music and vibe was nothing I'd experienced before. Literally the best sporting event I've ever attended!

What do you think of Jarryd Hayne being signed to the 49ers?

I think it's an amazing achievement that Jarryd got signed to the 49ers. It's definitely exciting but also a massive challenge considering he'll be up against others that have gone through superior school sporting systems where they have been playing and training in this code of football for years.

I do wish him well and look forward to following his progress. If he makes it all the way you can bet we'll be seeing a lot more Aussie flags amongst the crowd at Levi's Stadium.