13 Things You Must See And Do When In San Francisco

13 Things You Must See And Do When In San Francisco

San Francisco is a city like no other, from the quaint colourful architecture and vertiginous streets to the nearby tech hub of Silicon Valley and then of course there’s the cool moody weather all year round. San Francisco is one of the most diverse, cosmopolitan cities in the US, where something is always happening whether it’s music, arts or sporting events that you’re after. San Francisco has you covered. In fact why not try a little of each?

The city is super compact and public transport is great so it’s easy to get around and tick off all of your must see and dos while in town. This is great for big sporting events with the most anticipated event of the year, the Rugby World Cup Sevens, which is headed to the USA for the first time in 2018. The city will be bubbling with energy (and fabulous costumes) come July 20 to 22, the perfect time to see it in all of its glory.

AT&T Park, home to the San Francisco Giants, is where you will find the Rugby World Cup Sevens tournament, smack bang on the bay, right in the heart of the city for a truly unique San Francisco experience. You can pick up tickets for just one day (Friday, Saturday or Sunday) or buy the three-day pass to watch all the action.

So now that we’ve sorted the main event you’ll be coming for why not check out all of the other activities, sights and food you’re set to devour?

A symbol of the city, recognised the world over, the humble cable car is not only a quirky attraction for tourists but a practical and picturesque mode of transport that traverses the incredibly steep hills of San Francisco. Jump on the Owell/Hyde line to go past Lombard Street, famous for being ‘The world’s crookedest street.’ 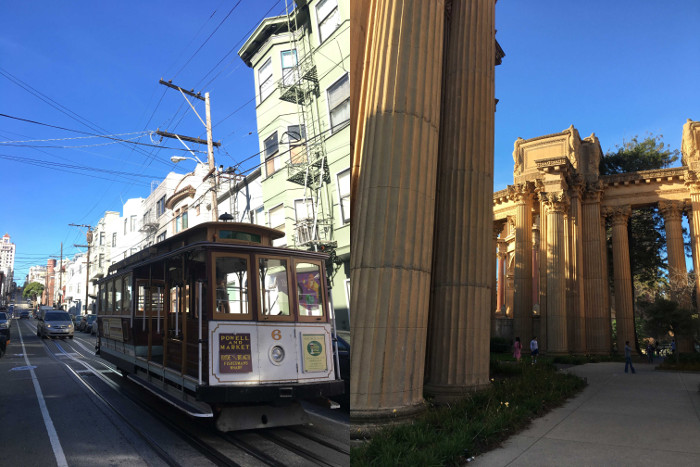 The Powell line tram and The Palace of Fine Arts in the Marina District.

This has to be the best way to fully experience the grandeur of the bridge, hire a bike and cycle across to the quaint town of Sausalito before catching the Golden Gate ferry back. 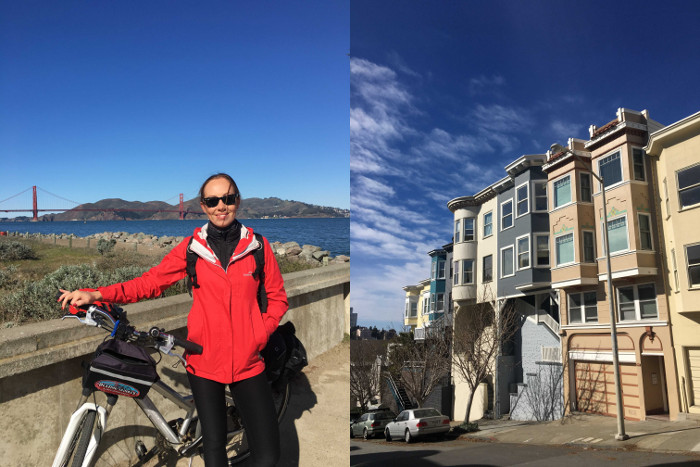 The author on a bike tour headed across the Golden Gate Bridge and some of the pastel hued houses of the city.

RELATED: 5 Road Trips To Hire A Car For In San Francisco

It wouldn't be San Francisco if you didn't eat too much and a must not miss on any trip is a stop in Chinatown. Head straight for modern hybrid restaurant and marketplace China Live for the best pan-fried pork dumplings of your life. Also don’t forget to pick up a fortune cookie or two, which were first invented here in San Francisco.

Museums have in the past typically attracted an older crowd however SFMOMA has been  successful at drawing a younger 35 and under crowd which the museum is proud of, due to its internationally acclaimed contemporary and modern art collections and exclusive exhibitions.

Following the earthquake of 1989 was the revitalization of San Francisco's waterfront and one of the exciting redevelopments was the Ferry Building, which was originally opened in 1898, then renovated and reopened in 2003. Today it’s clock tower stands tall above the farmers market below which runs on Tuesday and Saturday until 2 p.m., and no shortage of great places to eat. You can walk through the building yourself or take a guided tour to try a little bit of everything on offer. 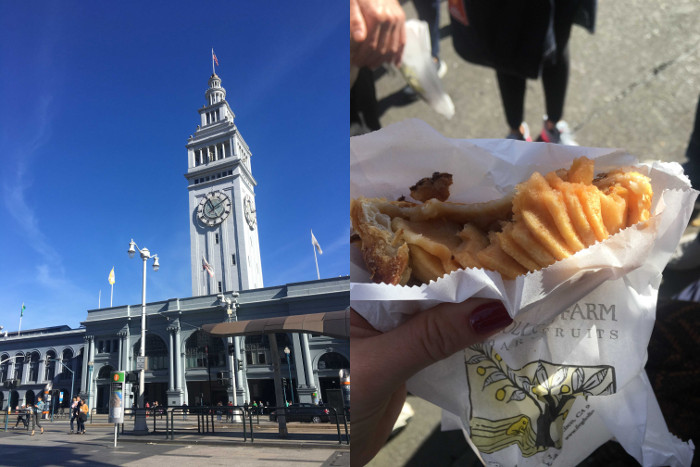 The clock tower of the Ferry Building and a delicious apple pastry from the Frog Hollow Farm Cafe, located inside.

Like something out of a movie, this bar is complete with a band floating in the middle of a manmade pond that intermittently rains - yes it rains inside, you have to see it to believe it.

Be sure to try the fresh seafood at Fisherman's Wharf, watch the sunbaking sea lions and soak up the carnival atmosphere at Pier 39, great for the whole family.

An area rich with culture and history means plenty of delicious food. In between walking the streets of this interesting neighbourhood (we recommend taking a guided tour) stop in at the local favourite of Tacolicious (Our favourite dish: the deep fried Baja style pacific cod taco, with shaved cabbage and cumin crema), Craftsman and Wolves (do not miss the famous ‘rebel within’ muffin) and the vegan delight of Gracias Madre. If you’re still feeling hungry afterwards pick up a snack at the local organic (and uber trendy) Bi Rite grocery store or stop by their creamery just down the road for a sweet pick me up. 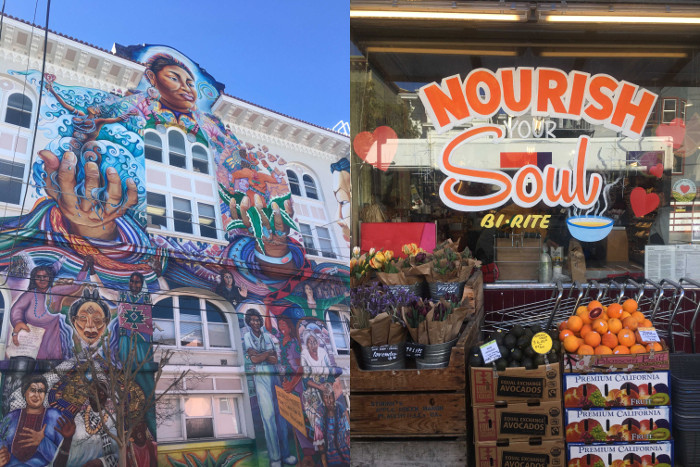 There's plenty of colour in the Mission District, especially with this beautiful mural on the facade of The Women's Building which hosts a non-profit arts and education community center, also seen is the local Bi-Rite fresh food grocery.

When weighing up which wine region to visit during your stay (why choose though?) Sonoma is to Mclaren Vale, what Napa is to the Barossa Valley.

RELATED: Do You Recognise San Francisco's Most Famous Streets

The birthplace of America's counter-culture, the Haight was ground zero during the summer of 1967 otherwise known as ‘The Summer of Love’. 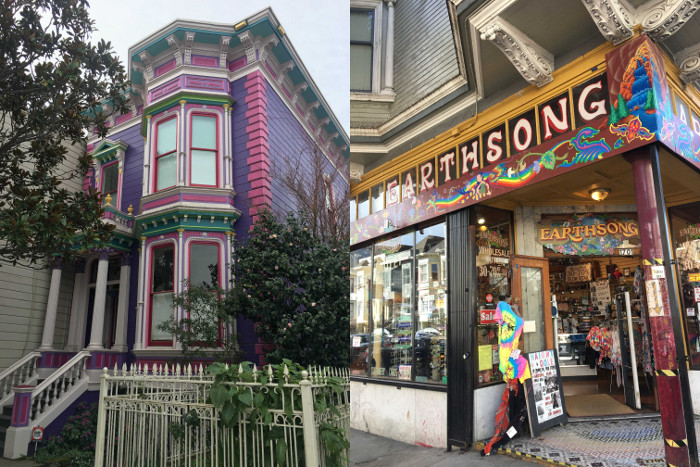 A colourful San Francisco home in the Mission District and a store on Haight St in the Haight-Ashbury district.

For brilliant views of the city and bay, head to Telegraph Hill in North Beach to climb the famous Coit Tower. Equally spectacular are the social-realism inspired murals painted on the inside of the tower, influenced by Diego Rivera.

If you’re feeling energetic then, take the 400 stairs down Telegraph Hill where along the way you'll get to see some beautiful San Fran homes and gardens.

Not far from Fisherman's Wharf is the Buena Vista Cafe which is purportedly the origin point of when Irish coffee first came to America.

On that note, make sure you stop off at ‘The world’s crookedest street,’ which is as quintessential as the Golden Gate Bridge itself.