While Castro, one of the first LGBT neighbourhoods in the United States, is known for its culture of pride in San Francisco, there are a number of other locations that extend across the city with significance to LGBT history and culture.

These five areas in San Francisco help make the city stand out as a LGBT proud, adding to its culture and significance in a modern world.

Harvey Milk's Camera Shop is the historic home of civil rights legend Harvey Bernard Milk, the first openly gay individual to be elected to public office in California. Beyond selling the evident cameras, film and accessories, Milk altered the store into a refuge and social centre for those in need from 1972 until his assassination in 1978.

Milk became the unofficial mayor of Castro Street, and Harvey Milk’s Camera Shop (now a Human Rights Campaign Store) is recognised as one of the most important buildings in the country associated with the rights movement. Harvey Milk was immortalised in the Hollywood film Milk starring Sean Penn.

"How action could create change." These are the words of Harvey Milk and the inspiration behind artist Gilbert Baker’s Rainbow Flag.

In 1974, Baker met the San Francisco Board of Supervisors and was challenged to create a positive symbol of pride for the LGBT community. It didn’t take long before the flag was embraced around the world and to this day it continues to act as a universal symbol of pride and diversity! 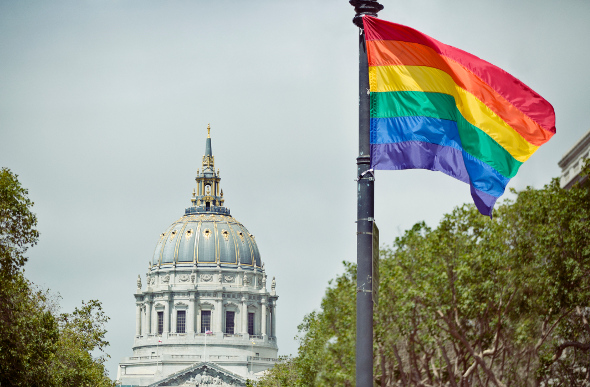 A non-profit organisation serving the LGBT population of San Francisco, SF Center offers free services that enable individuals to connect with counsellors and mentors, attend workshops, and be involved in day-to-day social activities.

The San Francisco LGBT Community Center focuses on creating a stronger and more equal world for the LGBT community, while also providing an overall sense of belonging.

The Women's Building In The Mission Neighbourhood

A place for community and activism, The Women's Building was the first female-owned-and-operated community centre in the USA. The group behind it are advocates for self-determination, gender equality and social justice, connecting women with a number of different local services, as well as in-house programs and other assistance and resources. Part of a mural on the outside of The Women's Building in 2015 (Image: Wikipedia)

One of the most important residential sites associated with the AIDS epidemic, the Ambassador Hotel was managed in 1978 by Henry Wilson, a San Francisco LGBT rights activist, AIDS activist and AIDS survivor.

Wilson’s staff consisted of drag queens, transsexuals, lesbians and gays. The welcoming place became a safe and comforting environment for AIDS sufferers in San Francisco, with doctors and nurses regularly on hand to provide care and support. The 150-room Ambassador began to deteriorate in the 1990s, but was renovated and has since been converted into low income housing.