On the last phase of their trip, Sean and Craig swapped the open road and cramped RV confines for the neon lights of the Strip, an ultra-plush suite at 'it' hotel, the Cosmopolitan, and a once-in-a-lifetime helicopter tour of the Grand Canyon.

But in classic Sean and Craig fashion, reaching civilisation along the Strip wasn't without a few hiccups.

"We literally could not get a taxi from where we had to drop the RV off in the outskirts of town," says Sean.

"There was meant to be a bus from the rental agency into the Strip but for whatever reason, it never showed up. If you were there with your family, it would've been a nightmare.

"Craig had to walk into some dodgy casino across the street to get a cab, while I waited on the other side of the road. His phone went flat so we lost contact for ages, too. Neither of us had any luck – the cabs just don't like to venture too far from the Strip.

"The hotel had to send a private car to get us – five hours later!"

[embed]https://www.youtube.com/watch?v=qvTkt7Oz3bk[/embed]
They eventually reached their fabulous digs at the Cosmopolitan – in a chauffeured Mercedes, no less – which by Sean's recollection "was awesome after waiting all that time; not to mention sleeping in the roof cavity of our RV for a week".

"We got into this suite at the Cosmopolitan and couldn't believe how big it was. There was this spa bath overlooking the Bellagio fountain, a king-size bed, huge lounge area, chocolate-covered strawberries – the works."

So, how do two guys who've been on the road for more than a week do Vegas? They were a little vague on the details – maybe for good reason – but Sean did hint at what may have gone on when they hit the town.

"I think we overindulged a little – it blew our brains going from one extreme to the other. That night in Vegas was pretty intense."

"We were just so stoked to finally get there," added Craig.

"I almost got beaten up, though! All these people dress up as movie characters and showgirls etc along the Strip. I had no idea why they were there; I just thought they were part of the tourist experience. But they're working; they get paid by passersby to pose for photos.

"I started filming 'Alan from The Hangover' because I had no idea, and he's yelling at me, then he starts chasing me down the street. That was a little scary," he laughs.

Evidently, it was a big night.

The guys, nursing hangovers, emerged from their luxury man cave the following afternoon and headed for the finale of their two weeks on the road – The Dream Weaver Sunset Tour, a sunset helicopter flight over the Grand Canyon with Mavericks Helicopters. 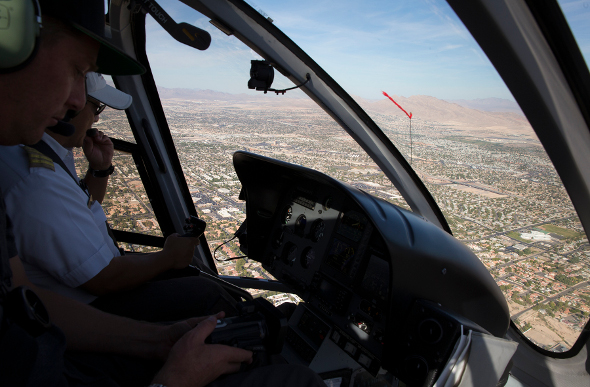 The view from above

The flight began over Hidden Valley and the Valley of Fire; offering Sean and Craig a bird's-eye view over the red rock and sandstone formations, with 'floor to ceiling' views from the helicopter's cabin.

After descending 3,500 feet below the rim of the Grand Canyon to Hualapai Indian Territory, they toasted their tour with a glass of bubbly.

Sean and Craig took some time to walk around, dwarfed by the towering canyon walls, in admiration of its sheer size and magnificence. 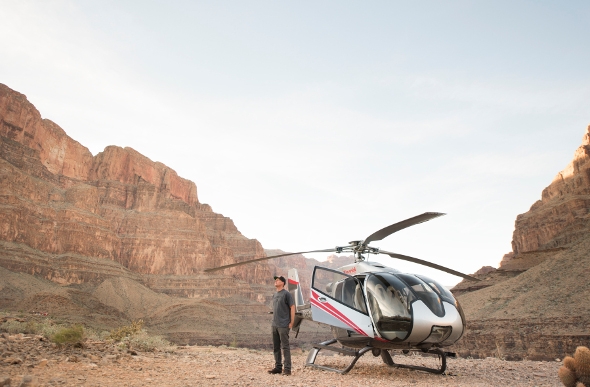 Craig on the ground 3,500 feet below the Grand Canyon rim

However, Craig said getting the perfect shot beneath the canyon rim proved slightly difficult due to the afternoon shadow.

"You should go in the middle of the day if you want the best photos on the ground.

"But in terms of seeing it from above, I got some great footage from the air and our landing."

They swapped the natural landscape for Nevada and Arizona's man-made wonders on the return trip; soaring over goliath Lake Mead, Hoover Dam and the Strip in all its glittering night-time glory.

All in all, the Grand Canyon experience blew the photographer and videographer duo away, especially seeing the sky turn piercing hues of tangerine and crimson as they flew over the terracotta landscape. 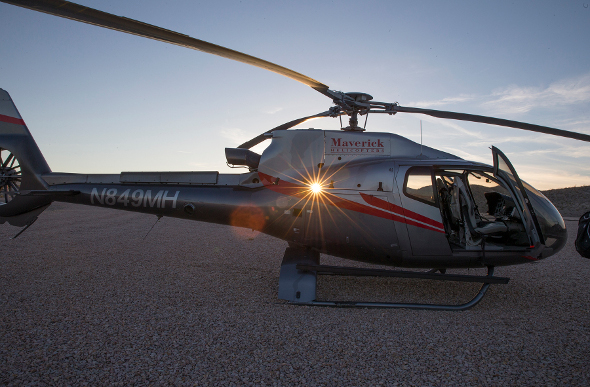 The Maverick helicopter at dusk

So, how did Sean and Craig describe their Las Vegas and Grand Canyon experience in three words?