Los Angeles, also known as the 'City of Angels', is the second largest city in the United States. A lot has changed in the skies since Charles Kingsford Smith’s pioneering trans-Pacific flight in 1928.

Nowadays, what previously took multiple days of travel hopping across Hawaii and Fiji can now be accomplished in a non-stop direct flight to Los Angeles taking just 12 hours from Brisbane.

Airlines that fly direct from Australia to Los Angeles

Heading over to Disneyland?

When travelling with children, you will find Qantas, United Airlines, Air New Zealand and Virgin to be the best value in terms of pricing.

This is primarily due to the fact the airline fuel surcharges are included in the base fare, which is usually reduced by 25 percent for a child fare.

Airlines that fly to the USA with one stop

There are also other carriers providing flight options to the USA – with stopovers possible on almost every continent, there are millions of different combinations available. Some of our favourite stopover options include: 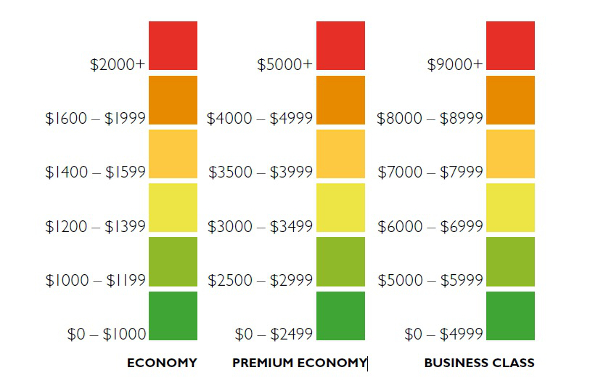 ♦♦ Flight Centre’s preferred airlines that service this route directly rarely fall into this price bracket. Airlines, which have longer or more numerous connections, can achieve this price point more frequently.

♦♦ This is a fantastic price. General expectation is in line with this level, be confident in knowing this is a great price.

♦♦ This is a slightly below-average price. If you have the cheapest booking classes, there may not be a heavily discounted sale in place or travel could be during a shoulder season.

♦♦ This is an average price. The flights could be heavily booked or travel is during the shoulder or high season. If there are no sale fares available and the price is deemed high, consider adding a stopover, which could reduce the fare.

♦♦ This is an above-average price. The flights are becoming very heavily booked and travel is during a high-demand period. A detailed explanation of pricing should be offered. A stopover on the journey will likely reduce the airfare price and assist with jetlag.

♦♦ There could be something cheaper. With a bit of flexibility, there are any number of stopovers that could be added to decrease the price of the airfare. There are also a number of round-the-world airfares, starting just above this price point, which represent excellent value.

Summers in Los Angeles are best spent under a palm tree in Malibu, Venice or Manhattan Beach. During the summer months, temperatures are at their highest, averaging around 21 to 24 degrees Celsius with an ocean temperature of 20 degrees during August.

Summer in LA is perfect for the beach, with many locals and tourists flocking to the golden shores to enjoy a slice of California sun. However, the summer months are considered the peak period for travellers. It is also the main school holidays break for the year.

Autumn, or fall as they call it in the United States, is when festival fun comes to Los Angeles. One of the city’s most famous is the Fall Festival, where harvest produce is celebrated with music, pumpkin carving and pie-eating contests.

Such festivities take place in ideal temperatures with days ranging from 17 to 23 degrees Celsius and with little chance of rain. During this time you may need to wear a coat to keep the chills at bay, particularly at night when temperatures can drop to 12 degrees. 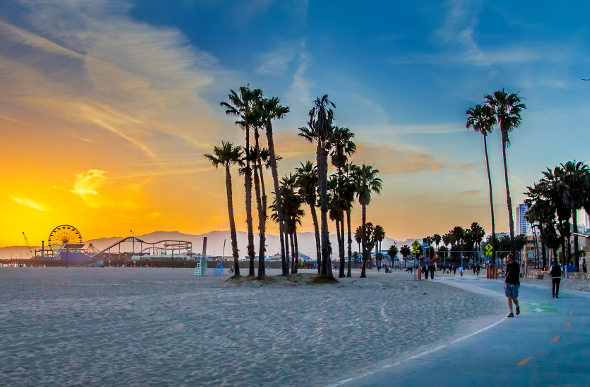 Head to Venice Beach during the warmer months (Image: Getty)

Though snow is very rare in Los Angeles, rain is quite common in winter. During this period, temperatures average around a mild 15 degrees Celsius but can also drop to single digits, particularly at night.

Most LA locals tend to spend winter shopping in the lead-up to Christmas and enjoy many festive activities. Make the most of the chilly weather by taking to the ice skating rink, which is set up annually in Downtown LA.

Spring March To May

While Los Angeles is a truly great destination to visit all year round, spring would have to be when the city is at its most picturesque.

Following winter, the city warms back up to 19 degrees Celsius and rainclouds are replaced with clear blue skies.

Further to its beauty, spring is also a low season when it comes to travel and thus offers great accommodation prices and fewer crowds than usual. It’s the perfect time to visit popular theme parks like Universal Studios Hollywood.