London's dining scene has massively evolved in the last decade or so. Cool restaurants open every week; so, too, do pop-ups promoting the latest foodie trends and fads. However, amidst this swirl of new culinary options, some old-timers endure. Oozing character, classic decor and trusty menus, the following establishments attract a loyal clientele, along with local hipsters and curious tourists. Don't be shy. Pop in on your London holiday.

A five-minute walk from Bethnal Green tube station in London's East End, Pellicci's is a cut above your typical 'greasy spoon' (the label given to down-to-earth 'caffs' that ply customers with inexpensive, mostly-fried fare). Kick off your day with a 'full English' - a gut-busting breakfast of sausage, bacon, eggs, tomato, mushrooms and fried toast - in a Cockney banter-filled cafe that has been in the same family since the early 1900s and boasts Grade II listed status by English Heritage thanks to its wonderful art deco-style, wood-paneled interior, crafted in 1946 by local carpenter Achille Capocci. In a nod to its Italian roots, Pellicci's also serves lasagne and pasta. 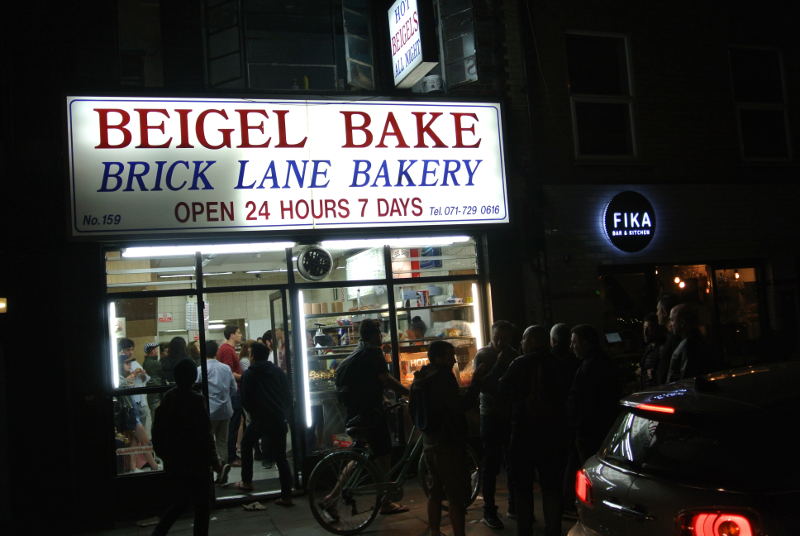 Brick Lane isn't all about curry, in the wee hours of the morning it's the bagel that reigns king here, at Beigel Bake. (Image: Steve McKenna)

For some Londoners, Brick Lane means curry (this strip, near Shoreditch High Street, is crammed with restaurants specialising in fiery Bangladeshi and Indian dishes). For others - especially hungry souls lusting after a 3am snack - it means bagels. Along with its rival and virtually next-door neighbour (the Beigel Shop), Beigel Bake - founded in 1974 - lures a steady stream of customers around the clock with its freshly-baked Jewish-style bagels loaded with ingredients like hot salt beef and smoked salmon with cream cheese. Most folk take away, but you can munch while leaning on the ledge by the mirrored wall. 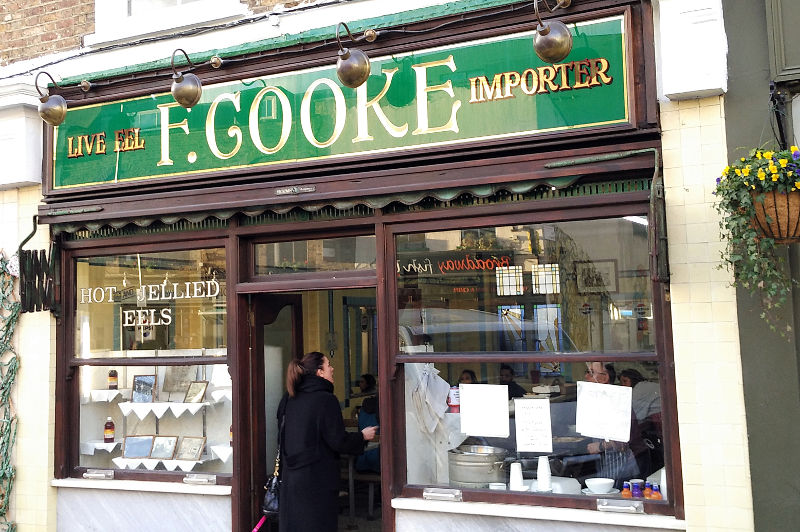 Running between London Fields and Regent's Canal in Hackney, east London, Broadway Market is lined with hip cafes, delis and pubs, and on Saturdays, it's swamped with stalls selling everything from obscure French cheeses to Vietnamese noodles. Surrounded by all this trendiness is F Cooke, a fourth-generation purveyor of that iconic London meal: pie and mash. The pies here are minced beef, enveloped in pastry and come with mashed potatoes coated in liquor (a parsley sauce). You can also order a side of jellied eels (another staple dating back to Victorian times). F Cooke's interior is resolutely old-fashioned (think: tables with wooden benches, 1970s boxing posters and sawdust on the floor). 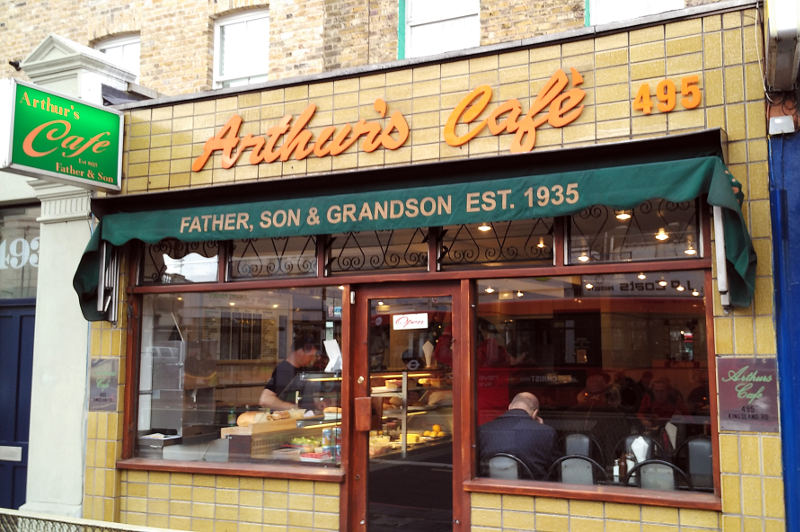 A classic northeast London eatery, Arthur's Cafe has been around since 1935. (Image: Steve McKenna)

The legend “Father, son and grandson Est. 1935” graces the awning of this friendly neighbourhood cafe in Dalston, a north-east London district that has been heavily gentrified in recent years (you can get here on the increasingly well-connected London Overground). As well as fry-ups and sandwiches, Arthur's staff serve a range of hearty daily specials like beef stew, shepherd's pie and lamb chops with veg. A solid choice, for a fiver (£5/$8.50), is ham, egg and chips (which, crispy, chunky, golden and delicious, remind me of the ones my granddad used to cook). Enjoy it with buttered bread and a cuppa (cup of tea). 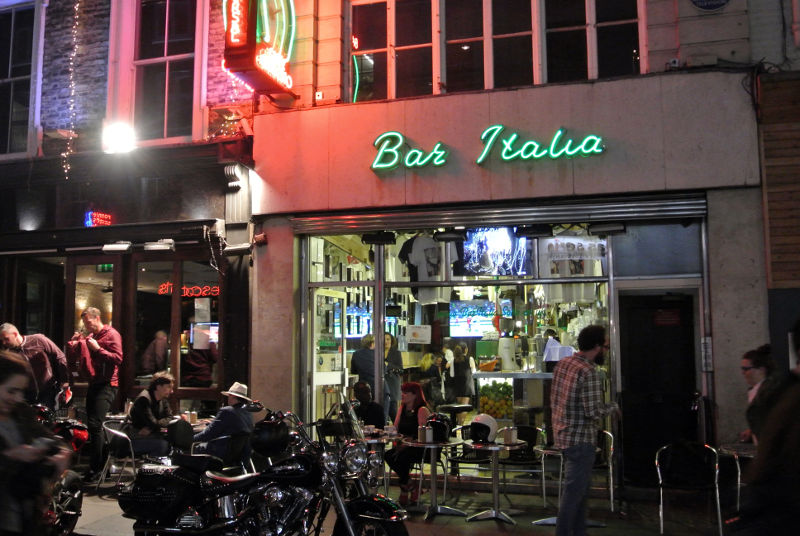 Bar Italia has been the heart of Soho since 1949, the perfect place to people watch for an evening. (Image: Steve McKenna)

A terrific place to watch revellers, theatre-goers and shoppers moseying by, Bar Italia has done a roaring trade at the heart of buzzing Soho since 1949. Open from 7am to 5am, it offers filling snacks - including paninis and tiramisu - but most come for liquid refreshment, whether it's a caffeine hit from the vintage espresso machine, a Peroni or an aperitif such as vermouth or spritz. Be sure to peruse the quirky decor. There's stacks of Italian memorabilia, black and white photographs, and autographed images of celebrity patrons (Paul McCartney has been known to refuel here).

Everyone from besuited office workers and political mandarins to taxi drivers and overall-clad builders flock to this retro cafe in Westminster's backstreets. Regency's classic black tiled facade and Formica-topped tables have featured in several BBC drama series, as well as Layer Cake (the 2004 gangster flick starring a pre-Bond Daniel Craig). The English breakfasts are perennially popular, but you can also have burgers, pasta, pies and daily specials, including Friday's fish and chips (choose from cod, rock, plaice, haddock or pollock, perhaps with mushy peas on the side). Don't expect waiter service. Order at the counter.

Visit The Real-Life Cornish Village From The Doc Martin TV Series
10 February 2020
I haven’t been a die-hard fan of Doc Martin from the beginning, but it’s pretty easy to fall in love with the characters of the popular UK TV series
Read Time: 6.6 mins
The United Kingdom