Soaking Up Summer Days In Japan

Soaking Up Summer Days In Japan

When Alex Ramirez leaned back before casually crunching a Norihito Kaneto fastball high into the Tokyo night sky, little did I realise that I was about to witness a genuine health and safety hazard.

Ramirez's piledriver just kept rising; firstly through the glare of Meiji Jingu's floodlights, then over the stands that separate one of Japanese baseball's most famous venues from the equally famous Meiji Shrine surrounding it.

By the time the Venezuelan's humdinger had landed – presumably to the startled surprise of anyone enjoying a twilight stroll outside – I'd just witnessed the biggest home run of my life. 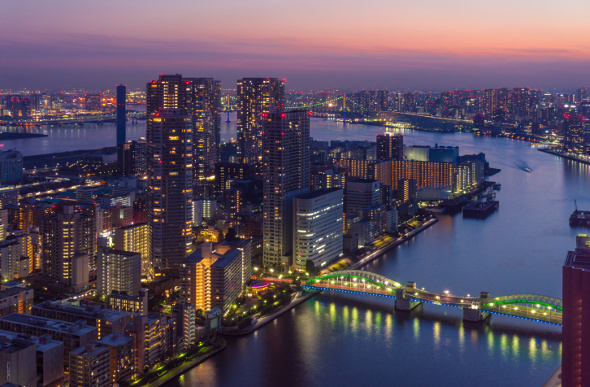 The sun sets over the Sumida River in Tokyo. (Getty)

For me, summer in Japan means baseball. More specifically, it's about sipping a beer in the bleachers while one of the country's 12 professional teams do battle in the Nippon Professional Baseball league.

But even if you're not a baseball fan – and the sport has proved wildly popular in Japan since its introduction in the 1870s – there's still plenty to occupy your time during the hot summer months.

Take cruising down Tokyo's Sumida River as an example. While it's hardly the world's most scenic river cruise, hopping on one of the vessels that ply the route between high-tech Odaiba and old-world Asakusa is a great way to gain a new perspective of the city.

Hop off at Hama Rikyu to explore downtown Tokyo, or head on past Ryogoku – where you'll spot plenty of sumo wrestlers – to the temple-laden streets of Asakusa.

Even if you've visited the atmospheric alleyways of Asakusa before, you can always head across the river to the spectacularly-shaped Asahi Beer Hall to enjoy a frosty brew complete with a bird's-eye view from the 22nd floor.

Beer drinking is a popular summer pastime in Japan, and they do plenty of it along the bustling shores of Minato Mirai in Yokohama.

Sometimes mistaken for being part of Tokyo's seemingly endless urban sprawl, Yokohama is actually Japan's second-largest city, and this harbourside setting is the perfect place to catch a cool sea breeze on a hot summer day.

While you're there, you can take a ride on one of the world's tallest Ferris wheels – the impressive Cosmo Clock 21. It takes 15 minutes to complete a full revolution and on a clear day, you can see as far as distant Mount Fuji.

Speaking of Japan's most famous peak, the official climbing season coincides with the height of the summer months. Most of those who reach the summit of 'Fujisan' do so in July and August, when the snow has long since melted and the paths are relatively clear of debris.

Of course, you'll be sharing those paths with the hordes of fellow hikers determined to reach the summit. If crowds aren't your thing, maybe steer clear of the mountain entirely and head straight for the scenic Fuji Five Lakes region instead.

For a complete change of scenery, you can always venture north to Hokkaido. Better known for its snow-bound winter climate, Japan's northernmost island offers an ideal escape from Honshu's sometimes stifling summer heat.

Capital Sapporo is one of Japan's hidden gems – a European-style city replete with wide boulevards, leafy public parks and some of the best food found anywhere in Japan.

The city's ramen scene is legendary, so much so that Ramen Alley in Susukino is one of Sapporo's top tourist attractions, while Hokkaido's fertile pastoral land makes it a great place to tuck in to some succulent barbecued lamb.

Plenty of other Japanese cities are worth a visit no matter the time of year, although Kyoto is perhaps best explored in autumn when the leaves start to turn, while bustling Osaka takes on a charm all its own when the cherry blossoms are in bloom.

I can't go past spending my summer days in Tokyo though. When I'm not catching a ball game, I'm usually lazing about under the shade of a tree in leafy Yoyogi Park.