While the bright lights of New York and Miami draw hordes of travellers to America's eastern seaboard, and San Francisco and Los Angeles do likewise on the west coast, the country's stunningly diverse interior is often overlooked by overseas visitors. And when it comes to under-rated inland destinations, South Dakota is right up there. Hidden in the US Midwest, sandwiched between Wyoming and Minnesota, it's an enthralling state to explore, dotted as it is with other-worldly landscapes, old 'Wild West' frontier towns, epic tales of cowboys and Indians and larger-than-life monuments, as well as the filming locations of hit movies like Kevin Costner's Dances With Wolves. A great way to experience it all is on Collette's 7-day Spotlight on South Dakota tour. Using laid-back Rapid City as a springboard, it features a slew of memorable day trips. Here are the highlights. 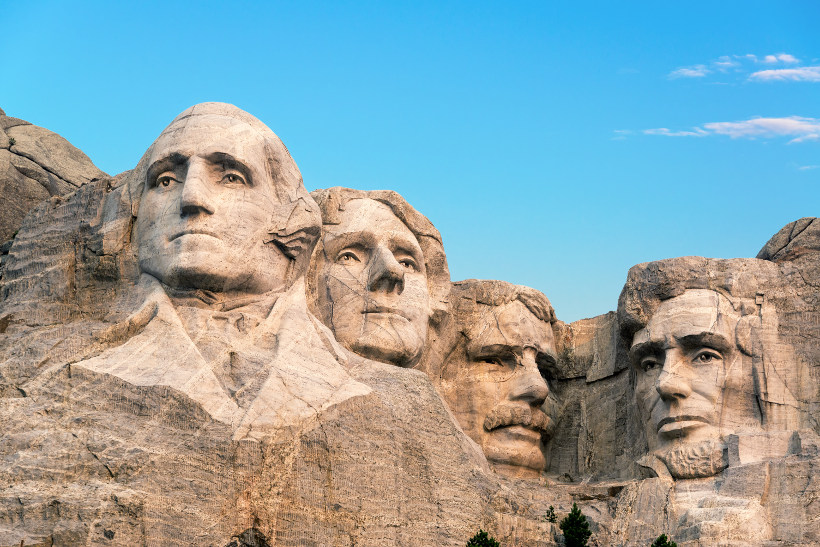 It's sure to mesmerise from the second you first glimpse it, in the distance, from your coach-seat window. Etched into a granite outcrop, jutting from the pine-clad Black Hills, near the town of Keystone, are the 18-metre heads of four presidents who changed the face of the USA: George Washington, Thomas Jefferson, Abraham Lincoln and Theodore Roosevelt. Mount Rushmore was created between 1927 and 1941, under the direction of artist and sculptor Gutzon Borglum and his son, Lincoln, and can be admired from several Insta-worthy perspectives, including a large, front-on viewing platform and a winding, tree-lined boardwalk. Alluring enough by day, this national memorial has an added magic after dark when it glows during a night-time lighting ceremony.

Throughout the tour, you'll gain fascinating insights into the Lakota Sioux - one of the largest Native American tribes, whose way of life was turned upside down by the arrival of white settlers and fortune-seekers in the 18th and 19th centuries. As well as a trip to the Pine Ridge Indian Reservation, where around 40,000 Lakota people reside today, you can marvel at the extraordinary Crazy Horse Memorial, which is being carved into a mountain, depicting a revered Sioux warrior sitting on a horse. Korczak Ziolkowski began this project in 1948 and after he died in 1982, his family continued the work. Crazy Horse won't be finished for another 50 or 60 years, but when complete, it'll dwarf Rushmore, measuring 195m wide and 172m high, with the face itself 27m. Learn more about it, and browse and buy decorative Native American arts and crafts, at the memorial's excellent visitor centre. 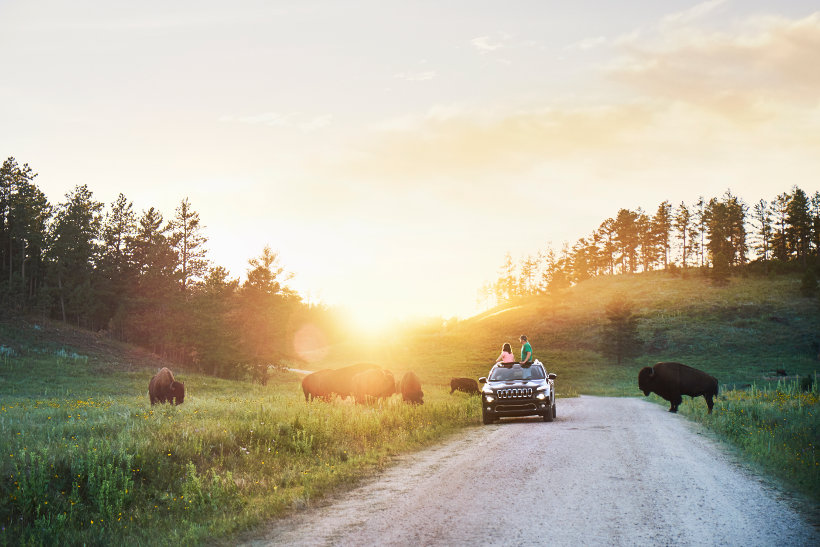 After being hunted almost to extinction in the 1800s, bison are again a common occurrence in Custer State Park.

One of the most exciting moments of your tour will be watching herds of bison (or buffalo) graze and stampede across this beautiful park, which is named after George Custer, the general who led an expedition into the Black Hills in 1874, and was killed in the Battle of the Little Bighorn during the Great Sioux War of 1876. Bison were a key source of food, clothing and shelter for Native Americans, but were almost hunted to extinction by 1880, after bison hunting became big business for new settlers, encouraged by authorities determined to tame and usurp the 'Indians'. Conservation efforts have seen bison numbers recover, however, and Custer State Park is now home to over 1300 of these great beasts. You'll see them on the park's 30km 'wildlife loop', and should also keep an eye out for mountain deer, elk, pronghorn antelope, bighorn sheep and burros (donkeys), whom you might get a chance to feed. 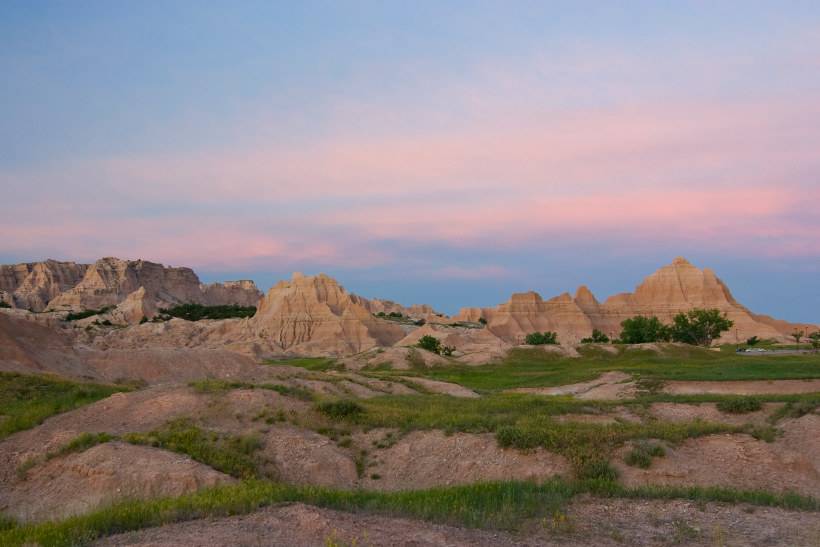 The ancient rock formations in Badlands National Park are transformed with colour as the sun sets.

Travelling through South Dakota, you'll see lots of sprawling grassy plains and rolling hills carpeted in pine forests. But every now and then, it'll feel like you've been transported to another planet. With its bizarre, pink-hued rock formations, dramatically shaped by centuries of erosion, the Badlands National Park is particularly mind-blowing. It's featured in several blockbuster movies, including Dances With Wolves, Starship Troopers and Armageddon, and awe-inspiring photographs can be taken from the footpaths skirting the most eye-catching pinnacles, buttes and canyons. Afterwards you'll lunch at nearby Wall Drugstore, an eclectic South Dakota landmark with a quirky Americana vibe. This maze-like complex boasts gift stores, Wild West-themed games machines and diner-restaurants that serve stuff like coffee and doughnuts and fries and bison burgers. 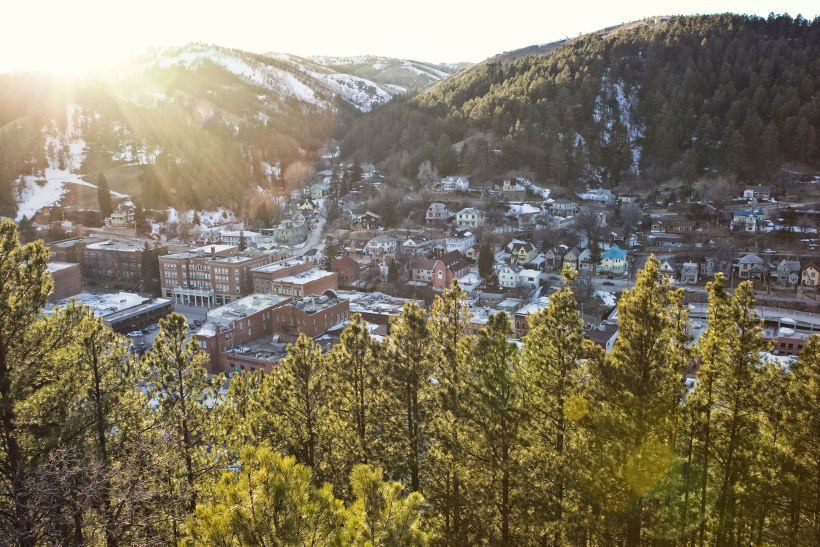 Deadwood is known as 'Mini Las Vegas' not for its wilderness location, but for its high number of casinos.

Immortalised in the eponymous HBO TV series, Deadwood was a lawless mining camp that sprouted during the Black Hills Gold Rush of 1876. Now it's a neat modern town dubbed a 'mini Las Vegas' because of its many casinos. Deadwood's colourful past will be revealed as you navigate it on an old yellow school bus, with a driver-guide unfurling stories of gold, gambling and gunpowder. One of the pit stops is the mountain-top cemetery where legendary former locals like 'Wild Bill' Hickok and 'Calamity' Jane are buried. You can have a drink in Deadwood's restored old-fashioned saloon bars - including the one where Hickok was shot while playing poker - and you may be tempted to purchase a cowboy hat from one of the souvenir shops. It'll look good on you for your farewell group dinner - a Western-style 'Chuckwagon' show, where you'll hear rousing live country music and plenty of yee-haws!

For the hottest deals in travel with Collette Tours visit your local Flight Centre store, call 131 600 or book now on the Flight Centre App.