Today Irish the world over will don the colour green, channel all their luck and raise a pint of Guinness to their favourite patron saint - St Patrick. Originally born in Britain in the fifth century, St Patrick is widely credited with bringing Christianity to the Irish population; legend has it that he used the three leaves of the Irish clover or shamrock to explain the holy trinity. St Patrick's Day is now the national day of Ireland and is celebrated both locally on the emerald isle and also by Irish ex-pats around the world. The annual St Patrick's Day parade is a fixture on the calendar of many cities. 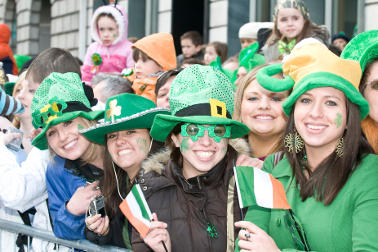 Revellers in Dublin to watch the Parade

Dublin
Joining the fun and frivolity of St Patrick's Day in the Irish capital is an experience to savour; the heart of Dublin comes to life in a sea of green. The celebrations, held over five days include music concerts, stand up comedy shows and a treasure hunt. The parade itself starts at Parnell Square at 11pm on March 17 and weaves through the city streets before finishing near St Patrick's Cathedral. A key feature of the Dublin parade is always the marching bands who add to the festive spirit.

Sydney
Australia's harbour city celebrates the day with a parade that starts at 12pm on the corner of Bathurst and George Street and moves through the heart of Sydney's central business district to finish at James Street. Following the procession, the fun continues with a Family Day in Hyde Park. Irish musicians keep the crowds entertained while kids will be kept amused with the dedicated children's area, face painting and the petting zoo. There will also be stalls manned by Irish County representatives.

Montreal
It's believed that the Irish community in Montreal began marking the special day in the mid eighteenth century. The first Montreal parade was held in 1824 and today the floats move along Rue St Catherine following a giant replica of St Patrick. With such the large volume of participants, the parade generally lasts for three hours and includes bands and community groups.

London
The English capital's contribution to the worldwide festivities centres around a parade that leaves Piccadilly at midday and moves through the streets of the West End to Trafalgar Square. Irish County Associations, marching bands, Irish dance schools and sporting clubs all entertain the on-lookers. Revellers are welcome to join in the party atmosphere in Trafalgar Square with a food market, a dedicated kids space and Irish entertainers.

New York City
Billed as one of the largest St Paddy's Day Parades in the world, the New York extravaganza stretches around two kilometres down 5th Avenue and generally takes around five hours for all the participants to reach the end. In line with tradition, the marching bands, cultural clubs and military groups are led by the 69th Infantry Regiment. Each year around two million enthusiasts are on hand to cheer on the parade while waving anything green - so for a great viewing position consider arriving early.