You usually get two types of winter days in London. The first is cold, plunging towards zero degrees, with crisp blue skies and enough brightness to have you searching for your sunnies. The second type of day is milder and greyer, and you'll probably need your umbrella. Whatever the weather, you'll want to break up your sightseeing and shopping with some liquid refreshment, whether it be hot chocolate, mulled wine, spiced cocktails or a trusty pint of beer. There are cosy olde-worlde pubs on almost every corner of the British capital, but there's a selection of terrific modern bars that'll linger in the memory, too, offering top-notch drinks, quirky decor and a fun atmosphere.

A post shared by Inception Group London (@inception_group) on

Tucked down a backstreet in Mayfair, this eclectic retreat was inspired by the fictional adventures of Victorian explorer Phileas Fogg from Jules Verne’s Around The World in Eighty Days. And after a few tipples – perhaps one of the 80 themed cocktails or ‘tipsy’ champagne and gin teas created by Passepartout, Fogg’s assistant – you may find yourself pondering your own plans to circumnavigate the globe, as you peruse the 19th century-style decorations, such as a hot-air balloon strung with Union Jack bunting and antique penny farthings, books and trinkets from his ‘voyage’. Customers are encouraged to dress in ‘an informal but elegant manner’, and also have the option of the bar's equally eccentric sibling, Mr Fogg’s Tavern, near Leicester Square.

A post shared by Worlds Best Bars (@worldsbestbars) on

One of Soho’s newest speakeasy-esque joints, Cahoots is a kitsch 1940s affair set in a former air-raid shelter and designed like the London Underground. Descend the wooden escalator-style staircase and you'll be greeted by vintage Tube posters, signs, tiles and patterned seat fabric and staff in period costume and character, who call you things like 'old bean' and conjure inventive tipples like Hail ’n Rain (Hendrick’s gin, apple juice, elderflower cordial, fresh lemon and tea syrup). Open until 3am at weekends, Cahoots is very popular, so it’s best to reserve a table in advance.

The Mayor of Scaredy Cat Town

There are branches of The Breakfast Club all over London – and they're ideal for a gut-busting 'full English' or syrup-drenched pancakes – but its Spitalfields offering, near Liverpool Street station, is the most offbeat, thanks to what's behind the Smeg fridge door. Give it a knock and ask to see the mayor and you'll be granted access to the seductively-lit downstairs bar, where you can order a raft of cocktails that range from floral, sweet and strong to sharp, fresh and zesty. You're unlikely to see the mayor – it's rumoured he doesn't really exist – but you can hang around and pair your drinks with food, such as poutine and buffalo wings. 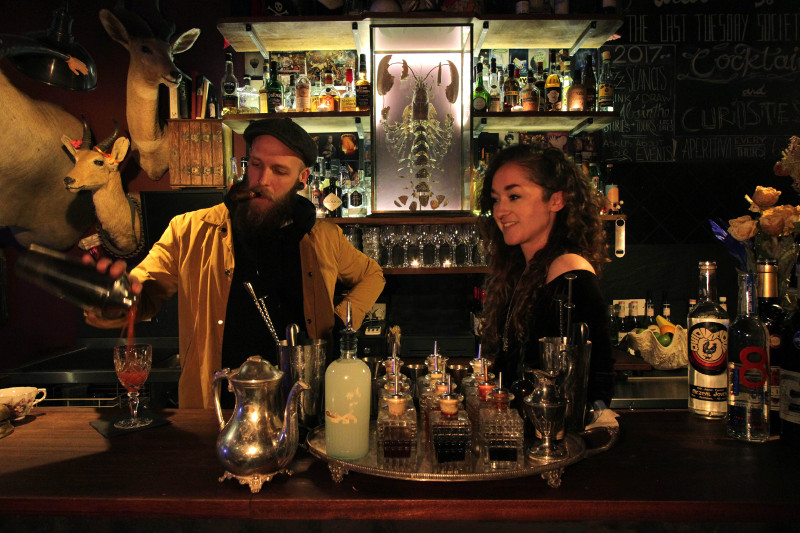 Rhys and Allison bring a mix of London’s drinking history and New York’s speakeasy culture to The Society. Image: The Last Tuesday Society

This surreal cocktail bar, a stone's throw from the Regent's Canal in Hackney, is tucked inside The Viktor Wynd Museum Of Curiosities, Fine Art & Natural History, which has been billed as London's 'weirdest museum' and a 'Little Shop of Horrors'. To a backdrop of curious exhibits, including living coral, two-headed animals, dodo bones and celebrity body hair (courtesy of former Hackney resident, actor and comedian, Russell Brand), Wynd, the 'chancellor' of the Last Tuesday Society, concocts a mind-blowing variety of absinthes and creations such as Wynd and the Willows (chilli pisco, apple, lime, mint, cucumber and egg whites).

Drinking in an old public toilet never felt so good. Set in a former Victorian lavatory beneath Clapham Common Underground station, W & C serves a fantastic mix of Old and New World wines along with shared plates laden with cheese and cured meats from the UK and Europe (one suggestion is the Cheese & Charcuterie, which includes French goat and cow's cheese, and stag and blueberry salami). You needn't be a wine buff to enjoy it here, as there's a good choice of ales and classic and contemporary cocktails, and, adding to the atmosphere, is live music on Sunday and Monday evenings. 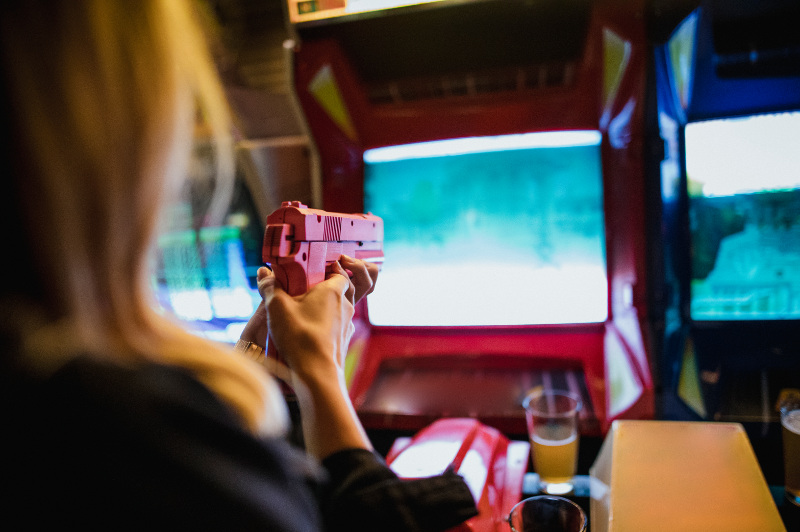 Revisit your (misspent) youth with some arcade-game action. Image: Getty

Gritty Peckham was once synonymous with Del Boy and Rodney – the wheeler-dealing Trotters from iconic TV sitcom Only Fools and Horses – but this is now one of south London's trendiest neighbourhoods. It's due, in part, to nostalgia-inducing bars like The Four Quarters, which occupies an old butcher's shop and boasts over a dozen retro arcade machines from the early 1980s to the 2000s. You can play stuff Street Fighter II and Pac-Man while devouring craft beers, hot dogs and nachos. If you find yourself in east London, there's another Four Quarters at Hackney Wick.