On my last trip to Vietnam, I reluctantly found myself at a ritzy hotel rooftop bar. I can’t comment on the city views or the food as I was in a state of shock having paid the equivalent of A$7 for lemonade. Given that the can was the cheapest thing on the menu, a meal was entirely out of the question.

That wasn’t the experience I was looking for. I wanted to keep my feet firmly on the ground, darting between overloaded stalls in overwhelming marketplaces and busy streets on the hunt for cheap street fare. That’s where Vietnam’s heart and soul is.

Raw and authentic, it’s these streetside eateries that are a true reflection of Vietnamese culture – and the families who run these tiny stores tell just as much of a story about the country as its ancient ruins and relics.

Temple fatigue gets many of us, but few ever tire of local food. It’s the yin and the yang; the sweet and the salty; the fresh and the fermented. Vietnamese food is inherently woven into the country’s fabric, best enjoyed hunched over a tiny table while sitting on a kid-sized plastic chair mere metres away from the never-ending flow of traffic.

The best restaurants are the ones hidden in plain sight, serving from ramshackle shops, hole-in-the-wall haunts and unassuming carts on the street, not on rooftops or behind glamorous glass doors. Sure, it can take an adventurous palate to look beyond the grimy shop fronts, but the reward is authentic, delicious and fresh food at outstanding value.

Boisterous, frenetic and chaotic, Vietnam’s streets are a veritable assault on the senses, as well as a round-trip route to flavour town. 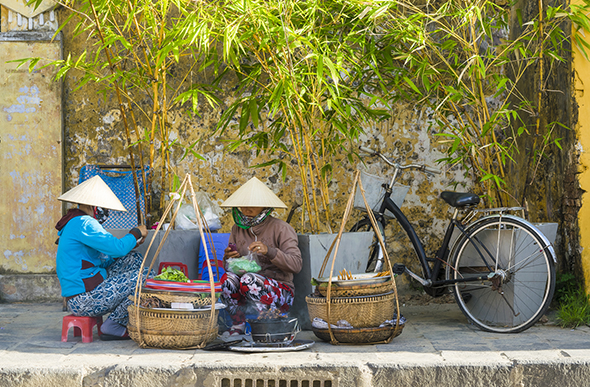 The UNESCO World Heritage listed city of Hoi An is a rare jewel in Vietnam’s crown. Mustard yellow facades and bougainvillea-lined boulevards peppered with temples and merchant homes are only part of the legacy that remains from its trading past. The spice and silk routes between Vietnam and China, Japan and France have also had a great influence on Hoi An’s culinary canon.

Along with variations of classic dishes, gourmands flock here for the ‘golden triangle’ of street specialities – white rose, translucent pork and prawn dumplings that resemble a rose; cao lau, five-spice pork and local greens served with thick, chewy noodles made from water sourced from a special well; and com ga, turmeric-based chicken rice. Hoi An is also a popular place for keen cooks to learn the art of Vietnamese cooking.

The food here draws on the fragrant trademarks of Vietnamese cuisine, but with its own distinct heritage and flair. There are temptations to be found at every turn, from wandering the heaving Central Market and its technicolour produce, to soaking up the serenity at the Tra Que Vegetable Village, an organic herb garden which supplies many of the restaurants in town.

Hoi An’s location on the banks of the Thu Bon River serve as the final flourish to a street food sojourn. As the sun sets, there’s really no better place to be than crouching on a stool by the riverbank with a cold beer in hand as the lanterns begin to flicker. 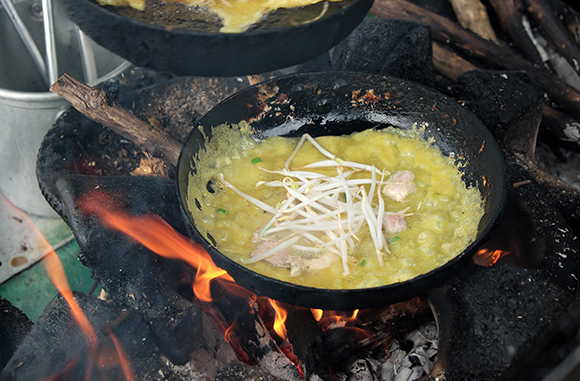 Sidle up to a stall for some crispy banh xeo (image: Getty)

Why didn't I think of that? Here's some unusual travel tips for your next trip to Vietnam

It's the little things: 77 simple travel pleasures to write home about (including local food, of course) 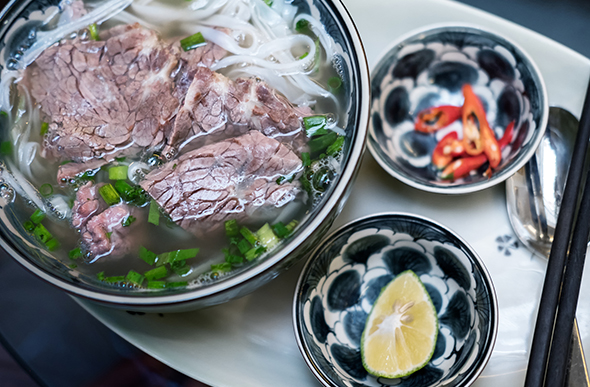 Hanoi is leafy boulevards, serene lakes and an Old Quarter swelling with scooters and basket-laden hawkers. The street food scene in the Old Quarter is wild and wonderful, with something to satisfy even the most apprehensive street eater.

No other dish represents Hanoi like pho, whose origins date back to the 1900s when, rumour has it, French colonialists brought their appetite for steak, and resourceful locals used the scraps to create the soup base.

Pronounced ‘fuh’, not ‘foe’, you’ll find humble bowls of this herb-scented broth, silken rice noodles and slices of rare beef (at its simplest) on almost every corner. It can be hard to stray from the comforting nature of this daily staple, but too much of a great thing means you’ll miss out on the rest.

Throw away the guidebook and let your nose and curiosity lead the way. Thit nuong (marinated grilled pork) is a common, mouth-watering aroma that wafts down bustling streets, as is the sweet bouquet of Vietnamese coffee. Ca phe sua da is the most popular variation, loved for its icy concoction of condensed milk and strong blend, while egg coffee awards curious gourmands with a sweet, tiramisu-like treat.

As for another kind of liquid libation, late-night fun comes in the form of a no-frills streetside drinking session. People from all walks of life gather on ‘Beer Corner’, the confluence of Luong Ngoc Quyen and Ta Hien streets, to throw down 5,000 dong ($A0.30) glasses of draft beer. The atmosphere is electric as the sidewalk-skimming stools gradually swell onto the streets, only to be hastily tidied up when word gets out that the police patrol is on its way. 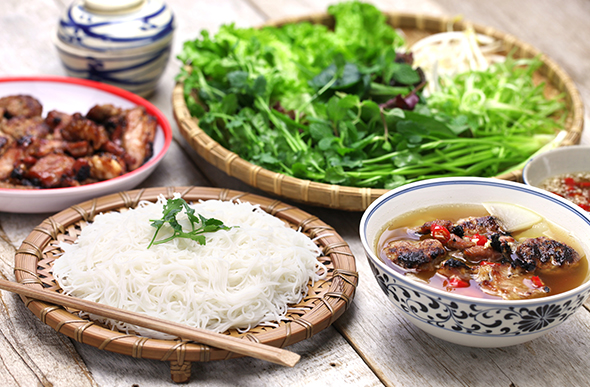 No foodie should miss a bun cha banquet in Hanoi (image: Getty) 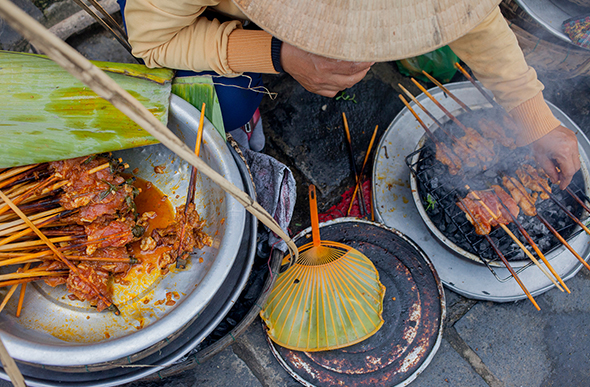 Sink your teeth into the heady charred flavours of thit nuong (image: Getty)

Ho Chi Minh City is like one big open-air marketplace. Street food in this dizzying sprawl of a city permeates through every district and down every nondescript laneway. Finding a blink-and-you’ll-miss-it local food haunt is like striking gold, which only adds to the allure of this energetic destination.

Given its reputation as a mega Asia city, street food in Ho Chi Minh City represents every enclave and region of the curvaceous country. Its flavours collide in an explosion of flavour, much like the chaotic nature of the metropolis. Northern Vietnamese food may let the ingredients shine, but here, it’s all about the extra spices and accoutrements.

It’s the tangy tomatoes and pineapple chunks swimming in tamarind-based canh chua soup, the chewy discs of banh beo topped with shrimp powder and of course, fragrant bowls of pho spiked with rock sugar and herbs.

“It’s bland otherwise,” says my Vietnamese mother as she dumps a hefty handful of bean sprouts and torn coriander into her bowl when pressed about her pho allegiance. Her southern bias aside, it’s hard to find a bad pho – or meal – anywhere in Vietnam. 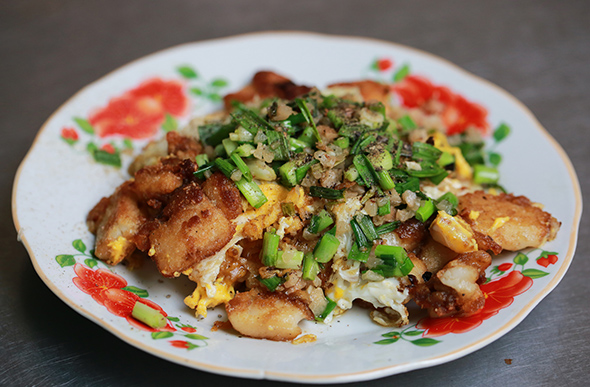 Visit your local Flight Centre store or call 131 600 for more advice and the latest Vietnam deals.