You’ll find Bella Coola on the bucket-list of most serious skiers and boarders. It’s one of the largest areas open to heli-skiing in the world. With over 10,700 square kilometres of jaw-dropping terrain open to skiers and boarders, it’s an area the size of the entire Swiss Alps, but without the crowds of the lift queues, and quite often first descent on every run, every day.

And one of the best places to base yourself for a few days heli-skiing is Tweedsmuir Park Lodge, a luxury lodge in the Bella Coola Valley, with easy access to Bella Coola Airport.

In summer however, people come here in search of a different type of adventure altogether. The nearby rivers are jumping with salmon, and around these parts, in Spring and Summer, where there’s salmon, bears usually follow. 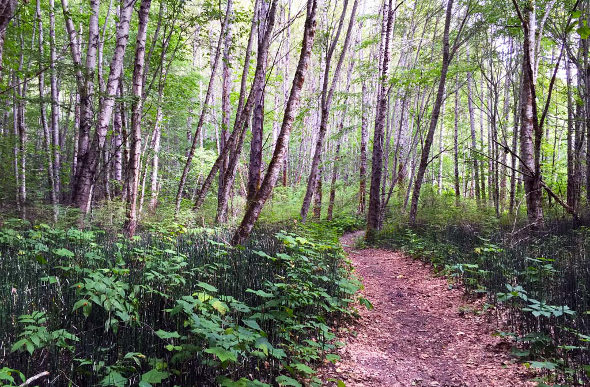 Enchanted in an old growth forest

The lodge sits in a very pretty valley with views in all directions of the surrounding mountains. A sweeping lawn leads down to the river, where the owners’ Icelandic ponies can sometimes be seen grazing and quite often throughout summer, grizzly bear sows and their cubs can be seen playing.

Our first adventure here is a guided nature walk along the Atnarko River, where we spot plenty of birdlife including colourful kingfishers, peregrines and majestic looking bald eagles, while our knowledgeable (and safety conscious) guide keeps a lookout for bears.

The next morning we’re taken on another guided nature walk, this time through a grove of old growth cedar, spruce and cottonwood trees in Walker Island Park. The area is a First Nation sacred site to the local Nuxalk community, and a source of cedar bark, used in ceremonial items and clothing for thousands of years.

We learn more about the Nuxalk culture a bit later on, on a walking tour through more beautiful old growth forest to find ancient petroglyphs, carved in rock by ancestors of the Nuxalk between 5000 and 10,000 years ago. 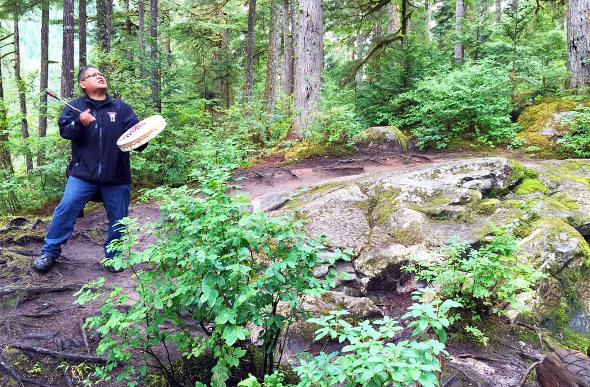 A heartfelt song of thanks

Our guides Bryan and Chris interpret the carvings for us, explaining their significance and tell us a few stories about the characters depicted, before singing us a song of thanks.

Later on we get to meet a few contemporary Nuxalk artists, including local legend Alvin Mack. Alvin’s wooden carvings are incredibly striking, a blend of traditional method and style, with his own personal style – and each one has a story.

In the afternoon we head back to the Atnarko River, this time to raft down it looking out for grizzly bears. The river is Class One water, which means you’re not going to get an adrenalin rush negotiating rapids, but you might just get a rush spotting grizzly sows showing their cubs how to catch salmon in the shallows. 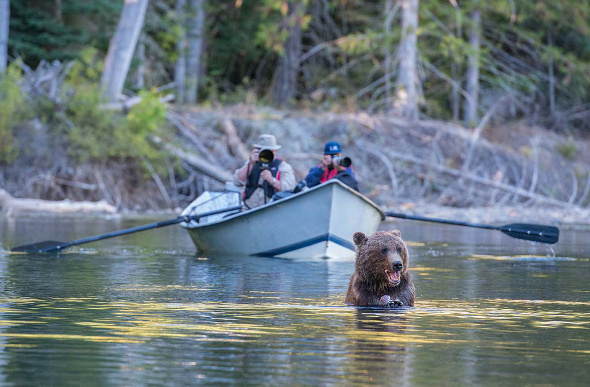 Grizzly bears start to make an appearance along the river mid-August, and in September and October you are almost guaranteed a sighting… almost. Some days, visitors can spend a whole day looking for grizzlies along the river bank and only spot one, and some have been known to see as many as 40 bears in a single day.

Our guide Lez Korolak has been taking guests down river for many years, negotiating the fallen trees and swirling eddies with little effort and entertaining us with bear stories along the way.

Up high in BC. British Columbia’s Sea To Sky Gondola Opens A Once Unreachable World

Our next day starts bright and early as we head off on the most exertive day trip so far – today we’re going to climb a mountain. We grab a packed lunch after breakfast and head for the airport where we’re helicoptered to the top of nearby Bella Coola Four Mile Mountain.

Our pilot Richard takes us first up Snootli Creek between two mountain ridges to Mt Saugstad, and over an ice field and turquoise-blue glacial lake before dropping us on the top of the Four Mile for a few hours’ hiking along the ridge. 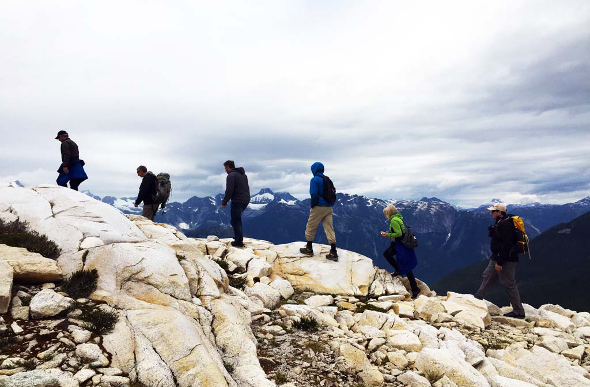 The ridge varies in width so at times it feels like we’re hiking through flower-filled meadows, and at times there are sheer drops on either side of us.

The view, in all directions, is breath-taking, the Bella Coola Airstrip far below us in one direction and Mt Saugstad, at 2908 metres, towering in the distance on the other.

This view of the Coast Mountains is one I’ll remember always. I can’t wait to see what it looks like in winter.