If there’s one thing Sydney residents love about their city, it’s the weather. But don’t let this fool you into thinking Sydney is just a summer-loving city. There’s plenty to keep sun worshippers happy in the cooler months.

Sydney has a range of amazing markets and festivals that hit the city in the cooler months, and a popular favourite (and arguably the city’s most spectacular) is Vivid. This year, Vivid Sydney runs from 23 May to 9 June and is a celebration of lights, ideas and music.

One major highlight is watching the Opera House transform into a wash of colour, as a series of striking images are projected while darkness sets in. Activities are scheduled across the city, but you’ll find all the main light installations and activities are based around Circular Quay. 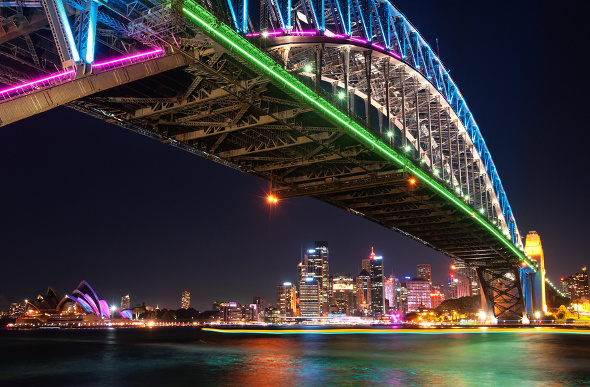 Rug up and head to the theatre

Sydney is a city full of creativity behind stage curtains, and the winter months are a perfect time to check them all out. The most prolific theatre in the city is the Sydney Theatre Company and it puts on mammoth productions such as ‘Macbeth’, which runs from 21 July and stars Hugo Weaving.

The Sydney Opera House is another powerhouse venue when it comes to seeing an amazing concert, performance or talk. Other local options include Belvoir St Theatre, Carriageworks in Eveleigh and the Seymour Centre in Chippendale.

During the winter months, humpback whales travel thousands of kilometres along the east coast of Australia from the icy Antarctic waters in order to breed, which makes it a perfect time to take a whale cruise and go spotting.

This is one of the longest animal migrations on the planet, and if you get lucky you can see the males showing off their dominance to impress the females. Cruises start at around two hours, with half-day options available for keen photographers.

Catch a flick at the Sydney Film Festival

Running from 4-15 June, the Sydney Film Festival is one of the most respected and oldest film festivals in the world – it turns 61 this year!

The Festival is an event that means an incredible amount to local filmmakers and showcases some of the best creative talent in the country. Around 250 screenings take place, with the pinnacle being the 12 feature films that compete in the official film festival competition for a prize of $60,000.

Take a coastal stroll then get cosy

Often the summer months get too hot to take a long hike and really enjoy it. Sydney’s mild winter days can therefore be the perfect time to take in the sights.

One highly recommended winter walk is the Spit Bridge to Manly, not least so you can finish at the Bavarian Bier Cafe at Manly Wharf for a post-walk drink or two.

Another is the Bondi to Coogee coastal walk, which offers some of the most stunning scenery imaginable. The breathtaking views are matched by the cool sea breezes blowing in off the Tasman Sea.