Take Me Out To A Major League Baseball Game

Take Me Out To A Major League Baseball Game

When thousands of fans roar “take me out to the ball game!” in unison, there’s no mistaking you’ve stumbled onto America’s favourite pastime. Major League Baseball is one of the pillars of North American sport and its ball parks are becoming increasingly popular tourist attractions.

I happened to catch a game myself on a recent trip to the States, rumbling out on ‘The 7’ from Times Square through to Queens to watch the hapless New York Mets snatch defeat from the jaws of victory against the plucky Pittsburgh Pirates.

Citi Field may not be the most romantic of baseball backdrops, but with so many phenomenal ball parks scattered across the league’s 30 home cities, donning your cap and nabbing an outfield seat is a wonderful way to get to know the locals. 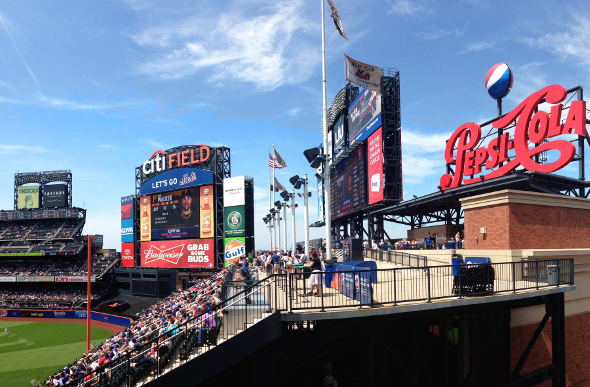 It’s not often a revolution kicks off in Baltimore, but you can thank Orioles Park at Camden Yards for the explosion in 'retro-classic' ball parks. Opened in 1992, the home of the Baltimore Orioles is a 45,000-capacity love letter to the days when inner-city venues were packed both with fans and architectural oddities.

While Camden Yards is dominated by the former B&O Warehouse which looms imposingly over the right-field wall, several other new ball parks boast impressive skyline views. PNC Park in Pittsburgh, Comerica Park in Detroit and Busch Stadium in St. Louis all incorporate views of their respective cities, but none can match the dramatic backdrop of AT&T Park in San Francisco. When a batter gets hold of one in Frisco, home runs go sailing straight into San Francisco Bay! 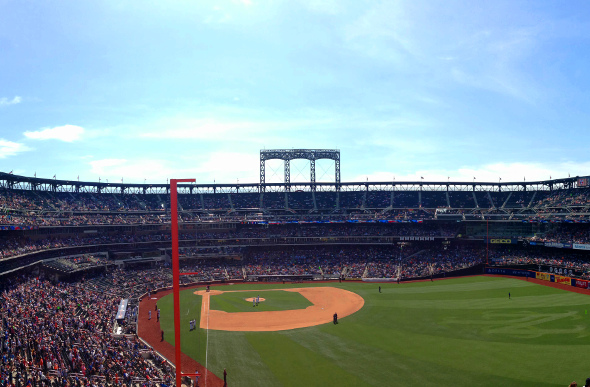 Fancy yourself a food connoisseur? Increasingly, one of the best places to sample a broad selection of local cuisine is at the ball park. In fact, some venues are as famous for their food stands as they are for the performances of the home team – including, I’m sorry to say, Citi Field. The Mets may not do much to boost New York tourism but their brand-spanking-new ball park boasts a dizzying array of eateries.

I headed straight to Shake Shack ahead of the Memorial Day showdown against the Pirates, but the impressive concourse eats are hardly confined to the 'Big Apple'. Grab a cheesesteak in Philadelphia, chow down some oyster po’boys in Seattle, indulge in a lobster roll in Boston or throw your hands around a hot dog made lovingly to local specifications in any of the other ball parks around the country. 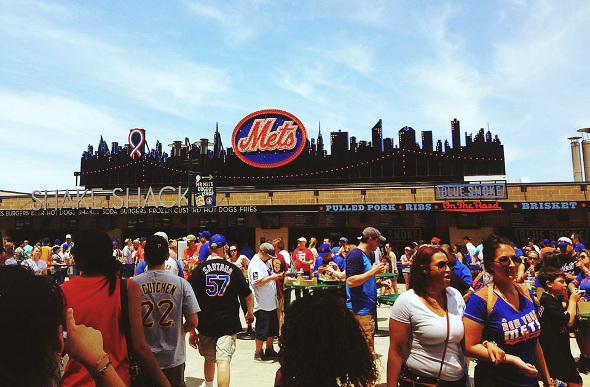 Lining up for a feast at the New York Mets

While many of Major League Baseball’s new parks hark back to a distant past, a couple of the competition’s most famous venues are legitimately old. Boston’s legendary Fenway Park opened in 1912 and it’s not only the oldest ball park still in use, it’s also home to the famous Green Monster – a 37-foot behemoth of a wall which routinely prevents right-handers from hooking home runs straight into the stands.

While Fenway is undeniably famous, perhaps America’s most beloved ball park is Chicago’s inimitable Wrigley Field. As renowned for its charming architecture as it is for hosting baseball’s most loveable losers – the seemingly cursed Chicago Cubs – Wrigley’s 'friendly confines' are covered in ivy, while the apartments across the road boast their own rooftop seats, making this 1914-built favourite the most atmospheric of venues.

Between 1903 and 1953, just 10 cities boasted Major League teams. The watershed moment came in 1958 when the Brooklyn Dodgers made the cross-country trip west to Los Angeles, and today it’s possible to watch baseball in just about every corner of America – and, for you Blue Jays fans out there – Toronto in Canada.

From San Diego to Seattle, Miami to Minneapolis, Colorado to Kansas City and just about everywhere in between, you’re never far from a ball park in the contiguous United States. It is, after all, America’s favourite pastime – and what better way to experience it than by belting out your very own version of 'Take Me Out to the Ball Game' during the seventh-inning stretch?