The Sultanate Of The Sea

The Sultanate Of The Sea

With a staggering collection of beaches and islands to suit all tastes, Malaysia remains southeast Asia’s most unsung holiday gem.

Multi-cultural, multi-ethnic and ripe with contrasts, Malaysia has glittering modern cityscapes and Moorish architecture that looks like it’s fresh out of The Arabian Nights. There’s soaring jungle canopies and southeast Asia’s highest peaks, all topped off by excellent nightlife that’s quickening the pulse of century-old colonial towns. The country boasts everything that her better‑known neighbours, Thailand and Bali, offer without the maddening crowds. With 4,500km of coastline, the pretty, accessible sandy delights found aplenty in Peninsular Malaysia and Borneo are the best place to start roaming. 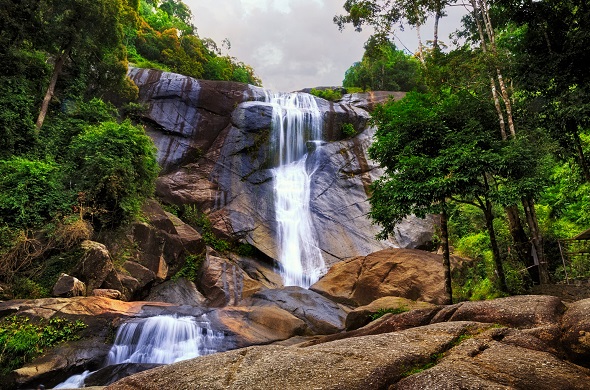 Seven Wells is a stunning complex of waterfalls and rock pools - a must-visit in Langkawi. (Image: Getty)

Malaysia’s best-known holiday island, Langkawi, is a jumping-off point to southern Thailand’s Andaman Sea.For sun seekers and party lovers Pantai Cenang’s crescent of sand lapped by warm, quiet waters boasts a strip of hotels, bars and restaurants to rival Bali’s Kuta Beach, but without the excess.
Langkawi, however, is best savoured on the go: rent an automatic scooter at Kuah jetty and set out to explore the island’s viridian backbone made up of fruit farms and quaint paddies filled with lazy water buffaloes. Right to the north of Cenang, Pantai Kok offers more secluded beach bumming on the way to the Seven Wells, a stunning complex of rock pools that drip into the 91m waterfall.
Langkawi’s northern side beaches are quieter: volcanic Black Sand Beach is scenic and empty, while Tanjung Rhu’s white scythe of sand is a less crowded choice for beach resort-chilling. For more adventure, boat tours offer an ideal way to explore more of the 99 outlying islets and atolls making up Langkawi’s archipelago.
For boat tours through mangrove forests and bountiful brahminy kite eagle feeding, head to the Kilim Jetty or the Tanjung Rhu area. For fishing, island hopping and sunset cruises, the biggest atolls to the south – including Pulau Tuba, Dayang Bunting and Singa Besar – make for great days and evenings out at sea. Before hopping south, visit Pulau Payar Marine Park – the closest thing to unspoilt, crystalline water paradise this side of the Peninsula. Several operators organise boat transfers and diving packages, but all it takes to float among black tip reef sharks and a plethora of other colourful sea critters is strapping a mask and snorkel on, and plunging into the sea. 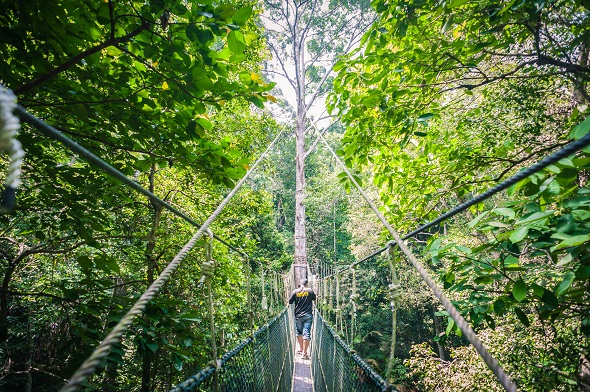 Penang's National Park in Teluk Bahang has a plethora of walking trails to discover. (Image: Getty)

Located 120km to the south, Penang is renowned for its incredible food, a vibrant arts scene and the UNESCO-protected George Town, but its natural attractions also lure the crowds. A little bit further west from the northern coast where the beach resorts and trinket markets of Batu Ferringhi and Tanjung Bunga rule the coastline, one can seek nature at Penang’s National Park in Teluk Bahang. Two one-hour hiking trails cut through dipterocarp and mangrove forests, passing a seasonal meromictic lake whose fresh and seawater never intermix, and ending with two attractive beaches and a charming lighthouse.
Pantai Keracut, on the park’s western flanks, has a small turtle breeding sanctuary and good camping facilities. More unspoilt powder is hidden down Penang’s southern reaches beyond the airport. Pulau Betong, a secluded stretch of coast facing a rocky islet, is sheltered by a web of forgotten Chinese fishing villages on stilts – a perfect place to while away the hours, immersing yourself in watching the locals go about their business.
Only locals know about Pulau Aman, a former pirate’s cove floating between Penang and the mainland’s coast at Batu Kawan. Pulau Aman is famed for its quiet and delicious mantis prawns. After a zesty lunch of mee udang (prawn noodles), hire a bicycle and pick the stretch of sand you fancy. A hike to the summit of the forested interior will grant you contrasting views of Penang’s not-so-distant booming modernity. 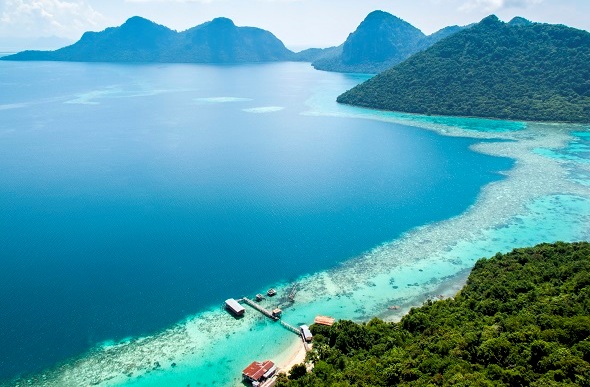 Across the South China Sea and beyond the rainforests of Sarawak, Kota Kinabalu in Sabah offers some of Malaysia’s best urban beaches on Gaya, Sapi and Manukan islands. Part of the Tunku Abdul Rahman marine conservation area, they float just 10 to 15 minutes away from the city’s seafront, dunking their white beaches into transparent waters filled with coral gardens. Besides great snorkelling, the islands offer kilometres of trails where sights of shy proboscis monkeys and hornbills are not uncommon. Manukan Island’s restaurants, water sports activities and chalet accommodation can get crowded, so head to Sapi’s two short stretches of white-powder sand for quieter snorkelling.
The islands of Sipadan, Kapalai and Mabul at the south-easternmost tip of Sabah, praised by Jacques Cousteau as one of the world’s finest marine environments, are unmissable. Formed by living corals growing atop an extinct volcanic cone, Sipadan is the crossroads of green and hawksbill turtles, flocks of barracuda, parrot fish, manta rays, hammerhead and whale sharks. Plunging into this magical place requires one of a mere 120 diving permits available each day – but it’s all well worth the price. 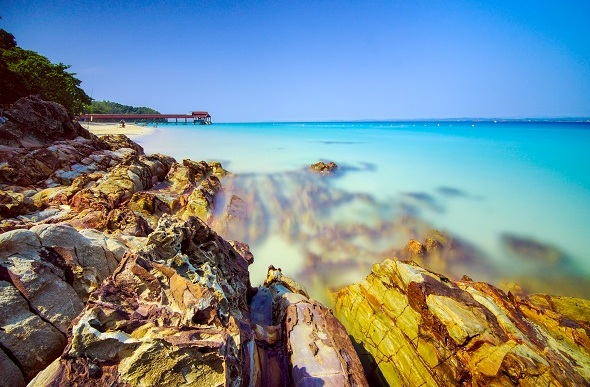 Pulau Kapas is a backpacker haven and one of the cheapest places in Asia to get open water dive certifications. (Image: Getty)

Best Of The East Coast

Peninsular Malaysia’s best beaches stretch along the country’s eastern seaboard. The Perhentians’ azure-ringed white sand, a short hop south of Kota Bharu, has been a backpacker haven for decades, and is one of Asia’s cheapest destinations for Open Water diving certifications.
A few nautical miles but a world away in spirit, Redang embodies the quintessential postcard-pretty beach paradise complete with glitzy sundecks, 5-star beach resorts and haute atmosphere, and appeals most to honeymooners, flash-packers and well‑heeled travellers.
Fewer know about Pulau Kapas, a smudge of grey and green in the deep blue sea 70km south of the Perhentians. With one resort, one dive centre and a limited number of bungalows, it’s as quiet and close to the rhythms of Mother Nature as it gets. Before readjusting gears to city speed in Johor Bahru, the gateway to Singapore, Tioman island and the surrounding 64 islets of the Seribuat archipelago – in particular Pulau Rawa, Sibu and Besar – offer one last jungle-clad hamlet to linger in for days surrounded by complete turquoise bliss. Given Malaysia’s generous 90-day tourist visa, days can easily turn into months.

Originally hailing from Voghera, Italy, Marco Ferrarese has made a name for himself as a Jack of rather different trades. Besides wearing the various hats of a globe-trotting journalist and travel writer, the Italian is also a musician.