From sunken kingdoms and pirate legends to surfing and spectacular sea cliffs, Wales’ relationship with the sea is an enduring one. People come from all over the UK – and the world – to experience its beaches, coves, islands, classic harbour towns and ancient castles. Discover what makes the Welsh coastline one of the most captivating in the world.

“A merry life and a short one shall be my motto”.

So spake Welsh pirate Black Bart (Barti Ddu), aka Bartholomew Roberts. You may not have heard of him, but (depending on which end of the cutlass you’re on) he was the most successful pirate in history, capturing more than 400 vessels in the course of his pirating career.

Black Bart in many ways epitomises Wales’ relationship with the sea – it’s full of action, adventure and legend, but few people are aware of it. After Wales' Year of the Sea in 2018, that will change. 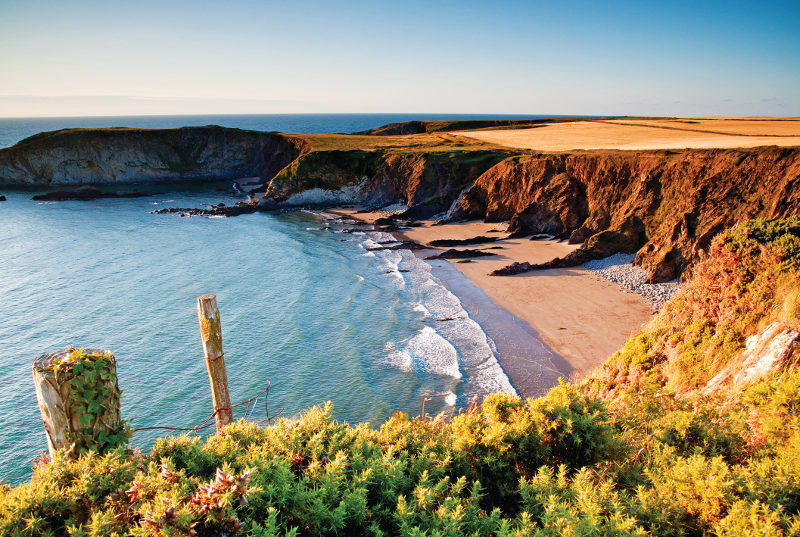 Beautiful and uncrowded, the coastline of Wales is truly special. Image: Getty

Take Cantre’r Gwaelod for instance. This is the Welsh version of Atlantis, a sunken kingdom said to lie beneath the waves of Cardigan Bay, but outside Wales few know of it. And then there are the bluestones of Stonehenge – one theory is these huge rock slabs, which make up part of the UNESCO World Heritage site, were transported much of the way here by sea from Wales’ Preseli Hills more than 4,000 years ago.

It’s hardly surprising Wales has such an intimate relationship with the sea when you consider that three sides of the country are fringed by the waters of the Atlantic Ocean – and you don’t need to be a sailor to discover this glorious coastline. 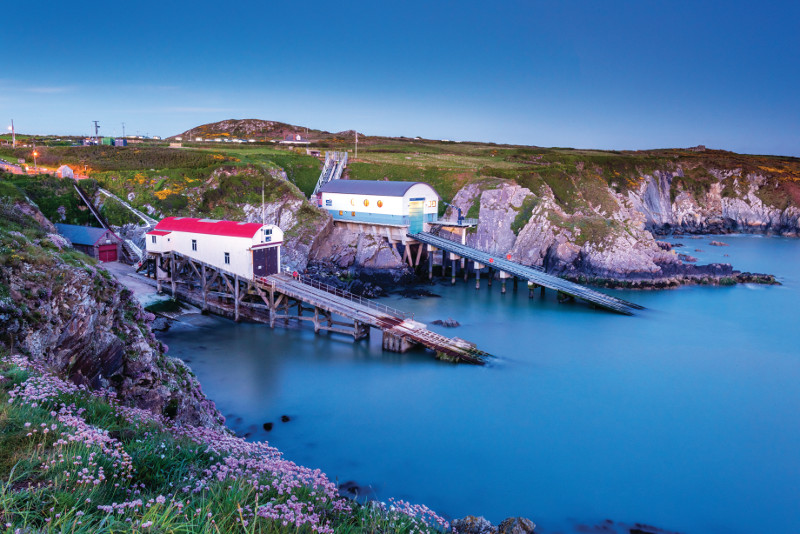 The old and new St Davids lifeboat stations sit side by side at St Justinians on the Pembrokeshire Coast. Image: Getty

In 2012, the 1,400km Wales Coast Path was opened, the world’s first uninterrupted route around a nation’s entire coast. It takes in mighty sea cliffs, internationally important wildlife habitats, hidden coves and pastel-painted harbour villages, broad crescents of wave-washed sand and placid, mountain-backed estuaries along with vibrant cities, including Cardiff, Swansea and St Davids (officially the smallest city in Britain with a population of less than 2,000 and just 46sqkm in area). 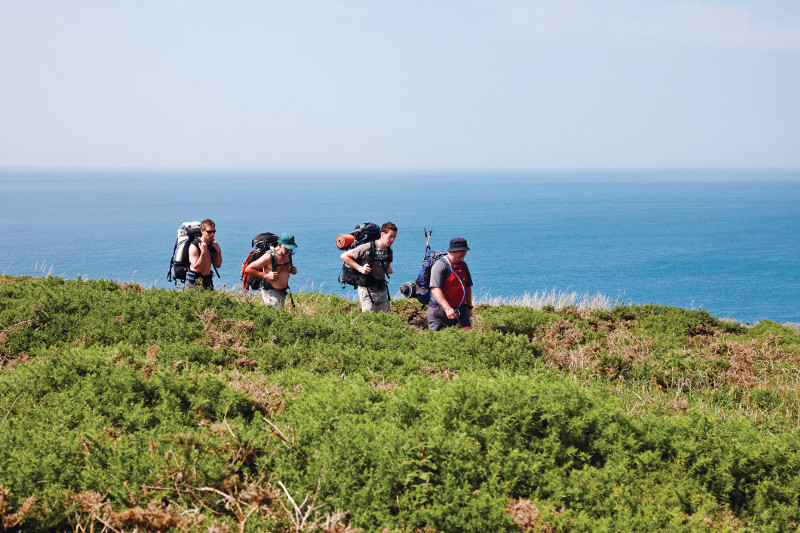 Walkers revel in the sun along the Pembrokeshire Coast Path. Image: Getty

Along its length you’ll find typically Welsh juxtapositions. At New Quay in Cardigan Bay, for example, you can walk the steep, narrow streets in the footsteps of Welsh poet Dylan Thomas at the same time as looking for dolphins just offshore. Or further north, there’s the rather bizarre Portmerion, an entire village built in the Italianate style and home to the award-winning Festival No. 6 every September that has featured such bands as The Flaming Lips and Bloc Party to the Royal Liverpool Philharmonic Orchestra. 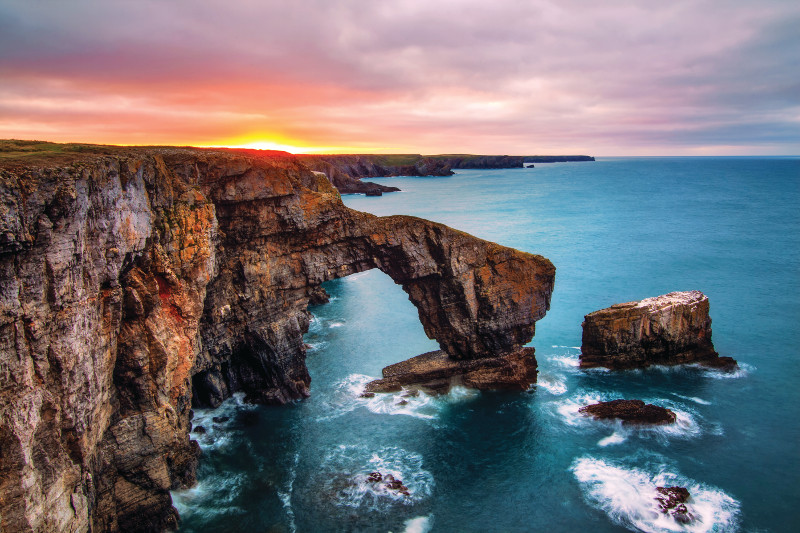 All this coastline is just asking to be explored, and not only on foot. Sea kayaking in Wales is world class with the Pembrokeshire coast and its islands offering warm(ish) Gulf Stream waters where seals and a wide variety of dolphins and whales compete for your attention with seabirds, including puffins, guillemots, razorbills and the world’s largest colonies of Manx shearwater and gannets. 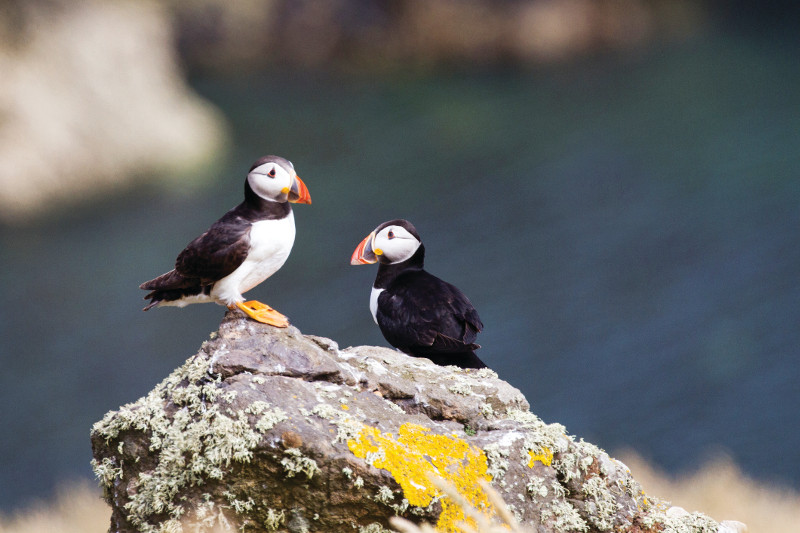 The Atlantic puffin colony on the island of Skomer off the Pembrokeshire coast is the largest in southern Britain. Image: Getty

Pembrokeshire is also home to Wales’ gift to adrenaline junkies, coasteering, in which participants traverse a rocky coastline by climbing, jumping and swimming. It was an ‘exploratory’ coasteer on Ramsey Island (of which I was a member) that led Andy Middleton, director of TYF Adventure in St Davids, to develop coasteering as an activity.

“It came about from a combination of knowledge and resources gained from whitewater kayaking, surfing, climbing and surf rescue,” he says. “As friends joined us on early coasteering trips, returning wild-eyed with wonder from crazy sea-level traverses along the cliffs and coves of the St Davids Peninsula, we realised that we had a new sport on our hands. The name emerged over late-night wine at a friend’s kitchen table.” 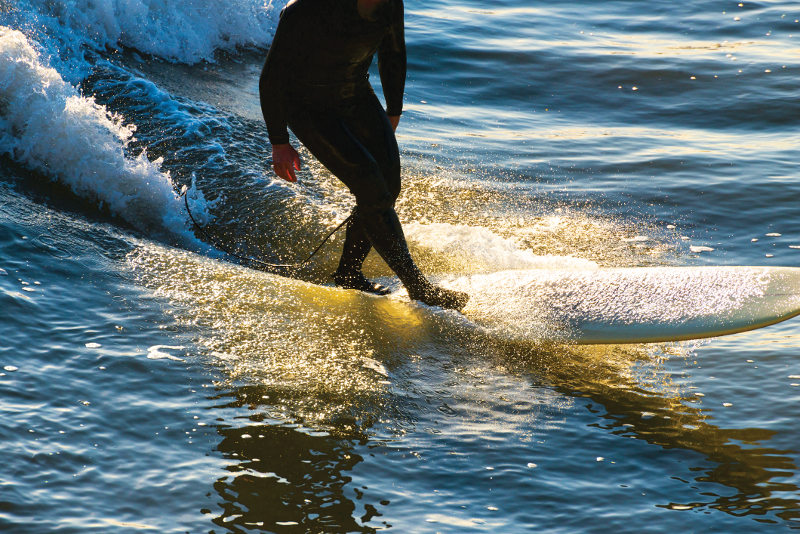 Welsh waters have produced some of the UK’s best surfers. Image: Getty

Ah, he mentioned surfing. Yes, a country that regularly gets a hammering from Atlantic storms has turned out some of the best British surfers over the decades, including various European champions. The Mumble Peninsula near Swansea is the focal point of Welsh surfing due to a combination of a large local population along with thousands of students and a useful mix of consistent beach, reef and point breaks.

Just make sure you’re there at the right time though – with one of the biggest tidal ranges in the world (often in excess of 10m), waves literally come and go with the rise and fall of the tide. After all this hiking, surfing, coasteering and kayaking, you’d be perfectly justified in wanting to chill for a while. No problem. For a real cosmopolitan city vibe, head to Cardiff, Wales’ capital city. Get there when there’s an international rugby match on and the hwyl (a kind of Welsh version of the Irish craic) is intense and immense. 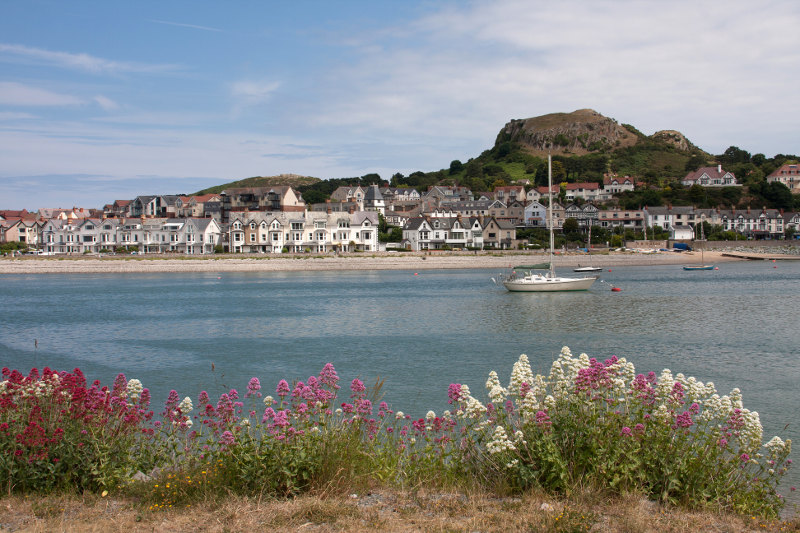 The charming town of Llandudno, as seen from Conwy Marina. Image: Getty

More mellow are towns such as elegant Llandudno on the north coast, with its stylish, wide Victorian streets and fine range of bars and restaurants, or pretty Barmouth on the Mawddach Estuary where cosy pubs offer the perfect place to relax at the end of a hard day in or on the water. Or pop into my home village of Solva, where you may find me in the Ship Inn after a day’s surfing at nearby Whitesands – and I might buy you a peint o cwrw (I’m sure you can work that one out!).

Alf Alderson is an award winning adventure sports and travel journalist and photographer, specialising in ski, surf and mountain sports. He is also the ‘gear’ editor of Ski & Board magazine, and ‘walks’ editor of Welsh Coastal Life and Welsh Border Life. When not on assignment, he spends summers in Pembrokeshire, Wales and winters in the French Alps. 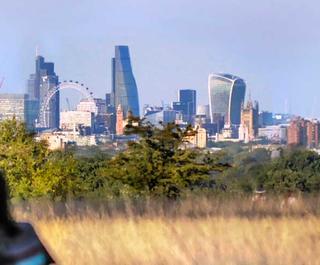 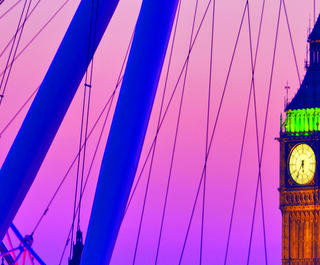