How To Enjoy The Floods Of Venice

How To Enjoy The Floods Of Venice

Venice is a city sometimes swamped by its notorious acqua alta or high tides, when water gurgles over St Mark’s Square and down historic streets. But don’t be put off at the thought of Venice under flood.

Haul on waterproof boots, tramp temporary raised walkways, and you’ll observe one of the world’s most unusual sights, plus see the beauty of Venice twice over, as the floodwaters shimmer with reflections from ornate church and palace facades.

The acqua alta of Venice is a regularly occurring event that arises from various combinations of high tide, warm winds and a full moon, and is worse if rain also falls. 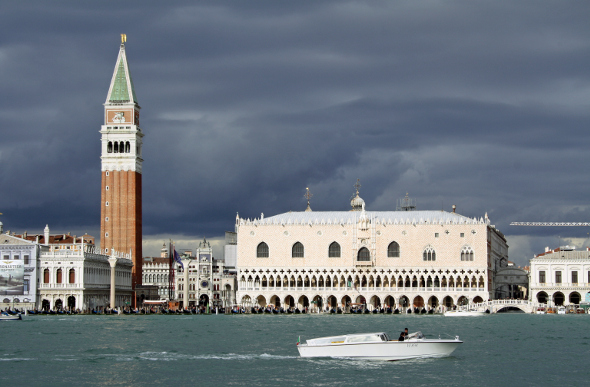 They occur between September and April (mostly in November and December) and have most effect on the tourist core of Venice, since St Mark’s Square is the city’s lowest point.

Tides that rise 85 centimetres flood the square and adjacent lagoon-side promenades. Another 20 centimetres leaves a tenth of the city under water. It’s unusual to have tides that top 120 centimetres, though the record (set in 1966) is a whopping 194 centimetres.

Acqua alta conditions are predictable and the city is well organised to deal with them. High tides are announced on the internet and in notices posted in St Mark’s Square and other locations around Venice.

Just before they arrive, alarms sound, rather like the beeping of a reversing truck. The more frequent the beeping, the higher the tide. You’ll also see council workers putting out wooden walkways known as passarelle that allow pedestrians to keep their feet dry. 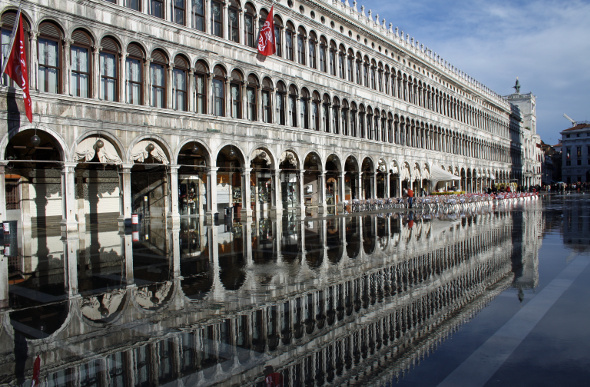 Four Things To Know Before Going To Venice

Although they’re a major inconvenience to residents, high tides don’t need to hamper your sightseeing much (though it make take longer to get about).

The only dangers are slippery flagstones, and times when high tides hide the unprotected edges of streets and promenades: take a step in the wrong direction and you can end up in a canal.

Otherwise, an acqua alta allows you the spectacle of seeing a city submerged, while you can relax in the knowledge that it isn’t a natural disaster, but a regularly occurring event.

Head to St Mark’s Square and you’ll see the first hint of the flood to come as water gurgles up through the gratings in the piazza’s flagstones. Before long, the entire square will be damp, and later cafe chairs will be afloat in the water. 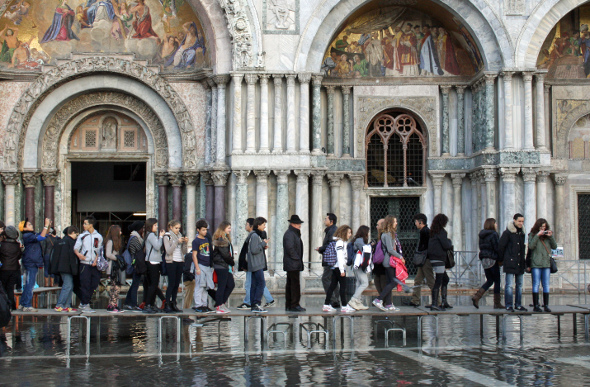 Eventually the porticos of St Mark’s Basilica flood, covering the floor mosaics and making the church resemble an opulent Roman bath. You’ll get some great photos of reflections in this area.

The promenades along the Grand Canal by the Rialto Bridge get early rising water too, which later spills over into the Rialto Market. Be careful around this area, since there are no railings between the submerged footpath edge and the canal.

If you want to keep your feet dry, it isn’t hard. Walkways allow you to cross the water, which is rarely more than ankle deep, and provide access to tourist sights. Shops sell purple or yellow plastic shoe coverings, though at outrageous prices. 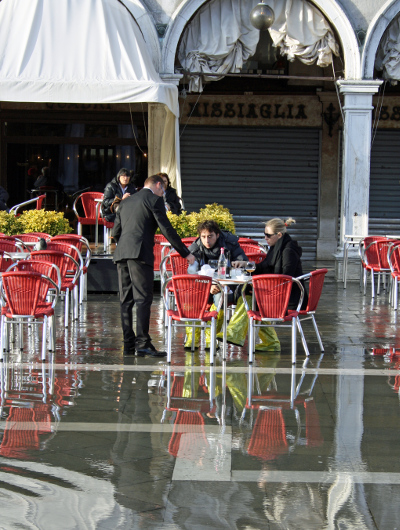 Back to business in a cafe on the north side of St Mark’s Square (Image: Brian Johnston)

You can also avoid the floods all together. Venice has over 100 islands of varying heights, and even a few centimetres can make all the difference. Usually only a small fraction of the city is beneath water, leaving plenty of dry areas to explore.

Tides are on a six-hour cycle, so the acqua alta starts falling after four hours, except when there are strong southerly winds. Soon locals re-emerge, waiters get back to work and Venice is back to business, leaving only remarkable memories.