Top 5 Things To Do In Ottawa For Families

Top 5 Things To Do In Ottawa For Families

You know it, because when you play the world capitals game, you often mistake a country’s capital for its more notorious, engaging, dynamic city. Poor old Canberra. But the Aussie capital is in good company. Cases in point: Madrid or Barcelona? Geneva or Bern? Auckland or Wellington? Ankara or Istanbul? Rio de Janeiro or Brasilia?). 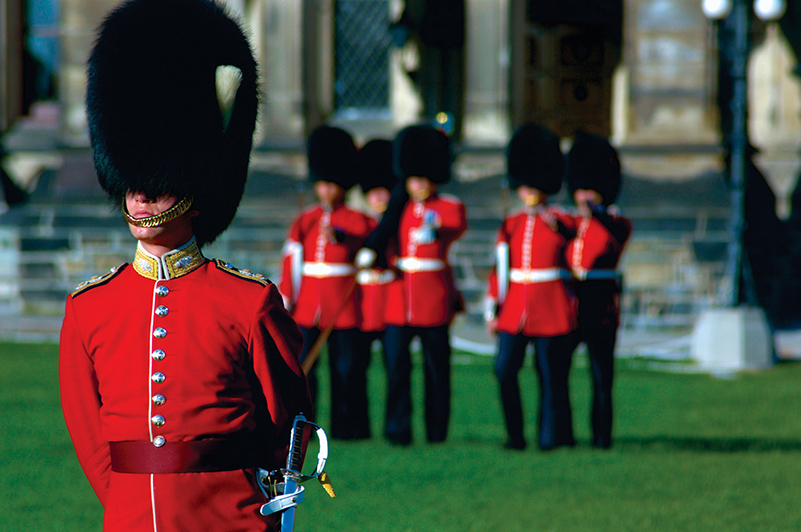 Changing of the Guard in Ottawa. (Image: Tourism Ottawa)

Ottawa is the most educated city in Canada, which means it’s home to about one million nerds with a lot of letters after their names, so they’re probably too enlightened to feel chippy about that. Still, the wholesome 'staidness' of the city is precisely what makes capitals such great destinations for families. Let’s face it, post-kids, a raging nightlife that kicks on until the wee hours, a hipper-than-thou brunch scene, cutting-edge culinary stars and theatre, and frenzied downtown traffic just don’t rate quite as highly as do great parks, nice sidewalks, bike lanes, roads (see the National Capital Commission’s Scenic Parkway) that actually close for bicyclists every Sunday throughout the summer, and a motherlode of museums.

“Ottawa takes its role as Canada’s capital very seriously,” says Jantine Van Kregten, Tourism Ottawa’s Director of Communications, without any trace of irony. “You will find all of Canada – from coast to coast to coast – represented in our public buildings, national museums and population.”

And it’s way funner than it sounds. 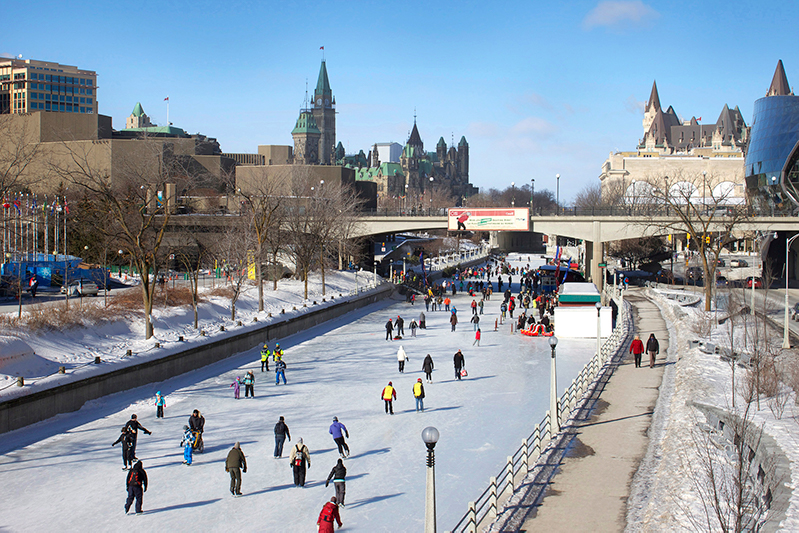 Ottawa, the capital of Canada, as chosen by Queen Victoria in 1855, nestles on the river that gave the city its name, from the Algonquin word “to trade”. The Ottawa River is clean enough to swim in (I spent a week in August doing that). The city is bisected by the Rideau Canal, an UNESCO World Heritage Site, which freezes in the winter and becomes a skateway. Seriously. You can ice-skate along the canal! It is officially the world’s largest skating rink. All 7.8km of it.

For your family’s edification, be sure to check out: 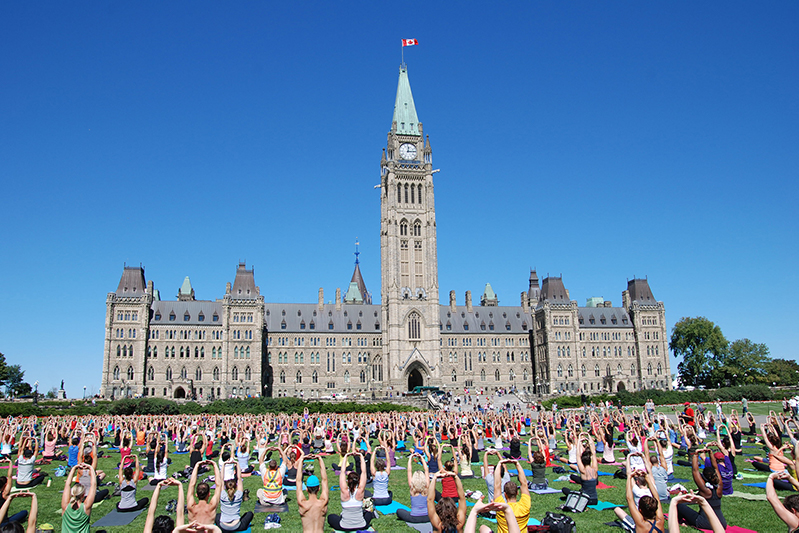 Look out for the Canadian PM during your outdoors yoga sesh at Parliament Hill. (Image: Ottawa Tourism)

At noon on Wednesdays, hundreds of people practice yoga on the lawn. Prime Minister Justin Trudeau, (maybe the only PM to grace the cover of Rolling Stone and GQ magazines, an unashamed feminist and proud Star Wars geek, who could conceivably singlehandedly sexy up capital cities) does an impressive peacock pose. See: the internet. Prime Minister Trudeau occasionally drops by. 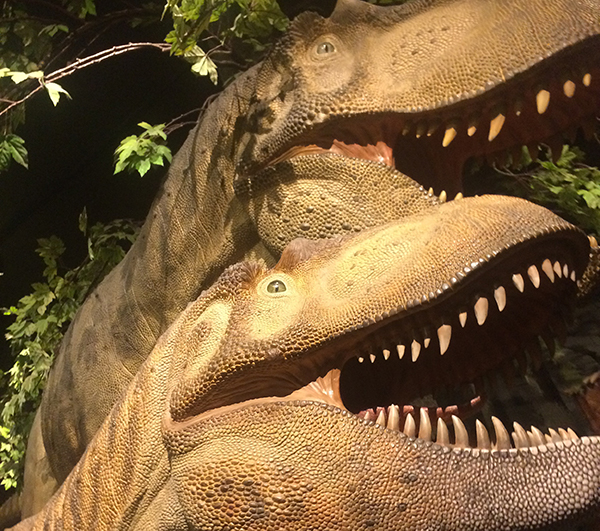 Ottawa boasts almost two dozen museums and cultural institutions, so you can skew to whatever your passion is. The Cold War? The Bank? Pioneer history? Space? Jantine’s top family-friendly ticks to enjoy the city include the free Changing of the Guard Ceremony and the Northern Lights sound and light show, both daily on Parliament Hill; the 19.8m-long blue whale skeleton (the largest mammal in the world) at the Canadian Museum of Nature: and the Canadian History Hall, which opened on Canada Day, July 1, 2017, after years-long preparation, at the Canadian Museum of History.

We were led by a four-year-old, so tackled the Canadian Museum of Nature, because dinosaurs; and the Museum of History, which includes the prop-friendly, hands-on Children’s Museum. 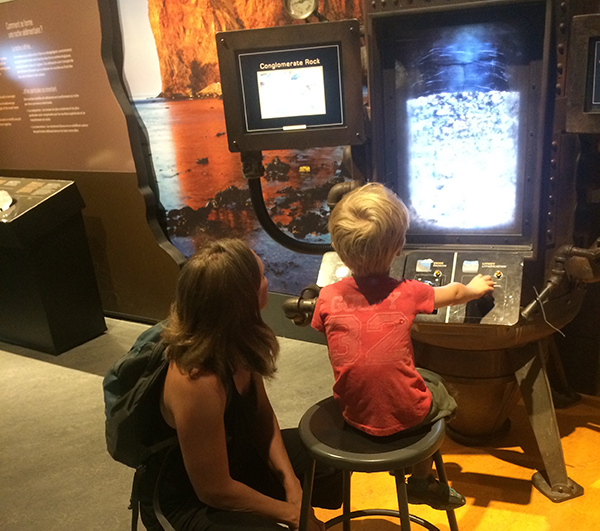 The dinosaurs, including fossils, reconstructed skeletons and dioramas of huge creatures, as well as a video of a volcanic explosion that seems to have permanently shaped an impressionable mind, were awesome, but not as awesome as the volcano simulator, which said four-year-old operated, pressing a series of buttons and levers to create a range of different volcanic explosions. We probably simulated a hundred mass extinction events, in between learning about taking turns, and me remembering the importance of regular snack breaks in the face of mass stimulation. 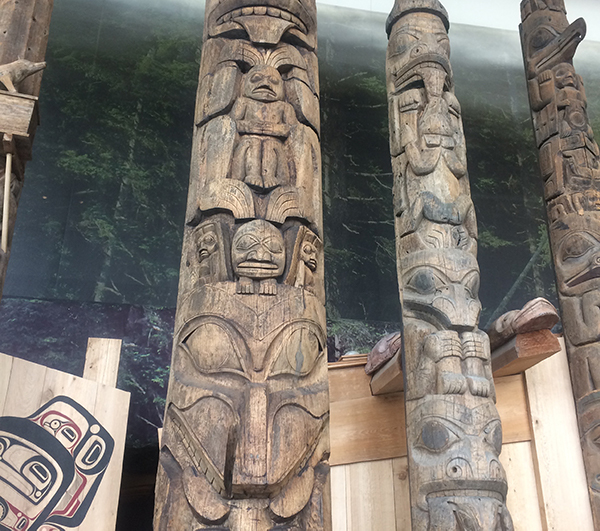 At the Museum of History (which has previously been known as the Canadian Museum of Civilization, and the Museum of Man), I stood in the Great Hall in absolute awe – realizing I’d travelled across the country only to gravitate immediately back to the west coast. Towering totem poles stopped me in my tracks, and the whole 150th anniversary of a nation took on a different tone. The First People’s exhibit is a reminder that we are on settled land, and that as settlers, we have been blind (and destructive) to the sophistication, beauty, and value of the cultures of the people who trace their stories to this land since time before memory. 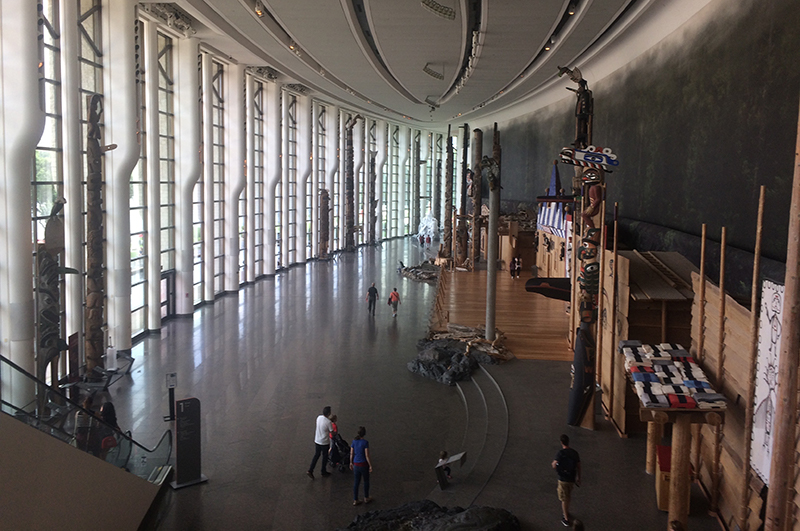 Taking in the Great Hall of the Museum of History in Ottawa. (Image: Lisa Richardson)

I soaked soberly in the quiet of the Great Hall, before we tackled the Children’s Museum, an around-the-world journey that teases kids with glimpses at different cultures and destinations – a colourful cacophony that probably is good preparation for  landing in Marrakesh. Ultimately, in my opinion, kids and too much of the indoors is not the best combination – they bounce off walls, as does the noise of all their jacked-up-on-sugar voices. So instead of visiting the animal barns at the Canada Agriculture and Food Museum – we headed for a pick your own apple farm, instead. 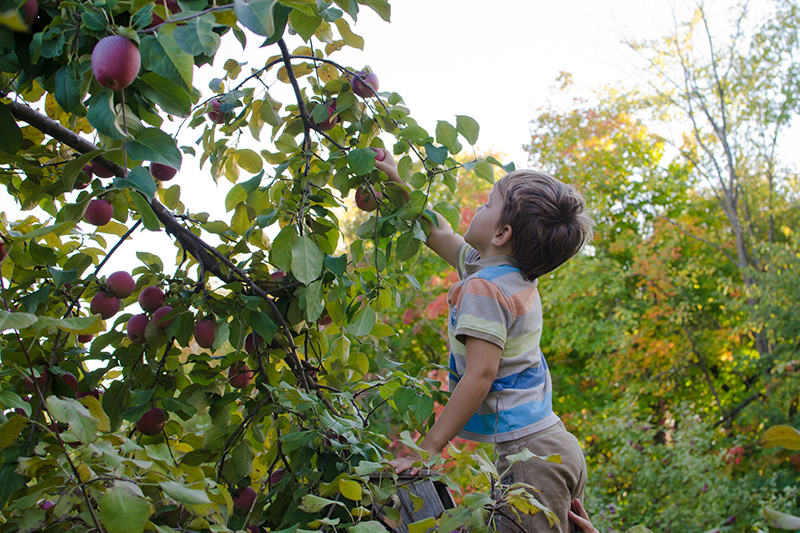 Pick your own apples at an orchard outside of Ottawa. (Image: Getty Images)

My vote for single best family outing in the Ottawa region is to hightail it 45 minutes out of the city, in the fall, for a small town called Mountain, and an orchard that has been a family-run pick your own tradition since 1972. Here, for free, the kids can pick their own apples, climb trees, ride on wagons, jump in the hay maws, get lost in corn maze, wander a nature trail and possibly spy an owl, and finish with a donut cooked in apple cider. Take home a pie and a sense that you have reconnected with an age-old harvest experience.

Our Ottawa trip was a highlight - we hit the beach, hiked to a waterfall, rode a ferry, ate poutine, explored galleries and watched movies, but for the 4 year old, the most lasting impression involved tractors, corn and donuts. At the farm. The fact that family farms and a pick your own experience is just a quick drive from downtown Ottawa only served to remind me never to overlook a capital city. Especially when travelling with the kids.

Ready to explore Ottawa? Check out our deals on sale now!

A Bris Vegas girl who got hooked on snow, Lisa Richardson is now based in the Coast Mountains of British Columbia, Canada, where she writes, blogs, mountain bikes, skis, climbs, and requests deliveries of Vegemite and Violet Crumbles from anyone who visits. She's always up for an adventure - the dirtier and more self-propelled, the better.