Growing up I never had a strong desire to 'experience' New Zealand. It was always the miniscule neighbour with the annoyingly good rugby team. It lacked the appeal of Europe, America and Asia.

I eventually grew out of my youthful ignorance and finally crossed over to discover that New Zealand is a bigger country than the world map led me to believe.

New Zealand's North Island is a rugged expanse of adventure, food and culture

Despite leaving the country with a prevailing wish that I had seen more, I came home with a list of numerous experiences I'll never forget.

I've narrowed them down to my top eight North Island experiences. It's not that I'm too hip for a top 10 list. I know that when I return to New Zealand's northern expanse I'll find at least two activities or sights deserving of the final spots.

Until then I have eight (in no particular order) and I recommend experiencing every single one.

A Quick Drop And Not So Sudden Stop

When a bungy cord is all that's stopping you from an abrupt meeting with your maker, you know life has just been amplified. My first bungy experience at Agroventures Adventure Park in Rotorua was an almost paralysing moment of fear, anticipation and adrenaline.

With my arms wide and my toes peeking over the edge of the 43-metre drop, I betrayed common sense and looked down. I leaned forward almost instantly afterwards, knowing every second I waited was another chance for me to back out.

A rush of blood and bravado began with the first millisecond of freefall and lasted for the rest of the day.

The Greenest Thumb In All The Land

I take my wide-brim straw hat off to the creative minds and green thumbs behind Hamilton Gardens for turning an oft-considered mundane part of life into a fascinating attraction.

Within the complex was more than 20 individually-themed gardens incorporating the Italian Renaissance, Japanese traditions, tropical flora and more. 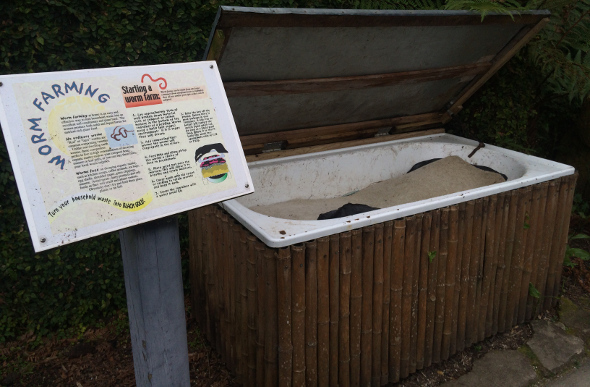 However, my favourite moments were treating my nose to the smells of the Herb Garden, seeing fresh fruit and veg in the Kitchen Garden (so good people have tried stealing some of produce), and learning tips to being wallet and environmentally friendly in the Sustainable Backyard.

Maori history and traditions are a revered part of New Zealand's culture, which I was fortunate to share in at Te Puia, a Maori cultural centre in Rotorua's Whakarewarewa (I can't say it either) Geothermal Valley. 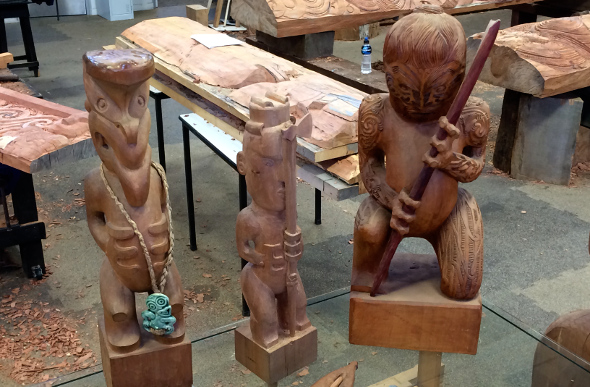 My afternoon involved seeing the area's  geothermal activity at the Pohutu Geyser, getting my first look at the native Kiwi bird and learning about the age-old practices of caving and weaving.

At night we were welcomed to a feast in traditional Maori fashion, which included my own admirable attempt at the haka followed by a scrumptious Hangi (meat cooked from the geothermal steam).

Discover more about Rotorua. Rotorua: A Journey Into Maori Culture

Who Needs Lights When You've Got Worms?

The glowworms reminded me of stars, and while we wandered through the Waitomo Glowworm Caves in temporary silence, I tried making shapes from the glowworms' tiny green lights.

The tour wasn't just about worms. The caves themselves were an attraction, having been formed more than 30 million years ago. Over millions of years the limestone had formed intricate decorations that, with some imagination, became alligator heads, bungy jumping bats and old women. 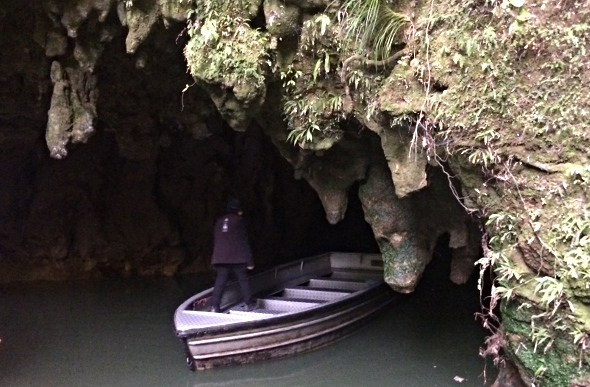 In the Cathedral cavern I discovered the power of natural acoustics, but it was the final boat ride, with only the thousands of glowworms above for illumination that left a permanent imprint of Waitomo in my trip.

Standing on the stern of the Rangitoto ferry, I looked back at the city skyline of Auckland, comparing its contrasting view to that of Rangitoto Island. The volcanic island's only manmade structures were a jetty, information station, a lighthouse and a few huts scattered around. 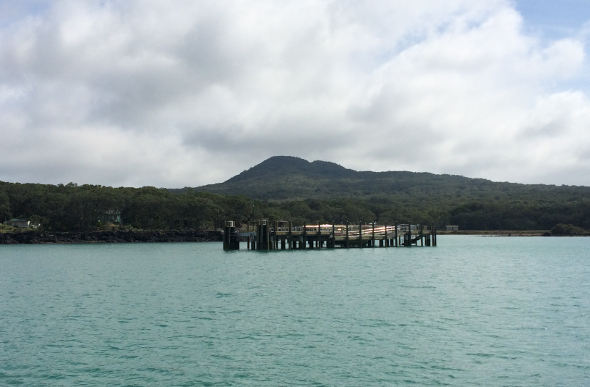 Rangitoto Island's volcano looms in the distance; a hike I won't soon forget

My goal was to reach the peak of the extinct volcano, which turned out to be a steeper and more exhausting walk than expected.

The views of Auckland and the surrounding gulfs at the top were worth it. However, crawling through and standing in the old lava caves, now dark, cold and full of adventurous character, will remain my fondest memory of Rangitoto.

We are introduced to so many fictional worlds that we wish were real. The Shire was always one of those for me, so being able to step onto the Hobbiton Movie Set and wander from the butcher's house to Bag End, down to the Party Tree and across the bridge to the Watermill and fishing jetties was a dream. 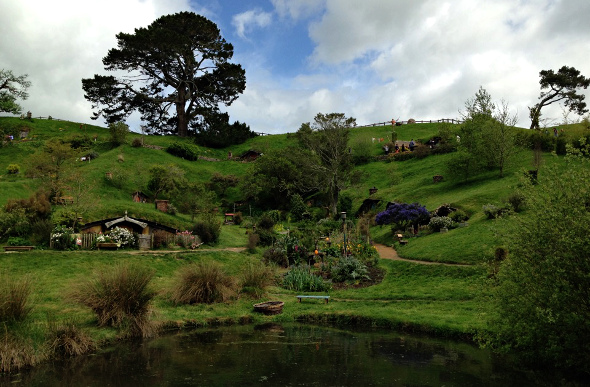 My tour through Hobbiton enabled me to hear tales from the filming process, appreciate the touches of authenticity applied to each area and enjoy a mug of beer within the fire-warmed walls of The Green Dragon.

The food around New Zealand's North Island was so delicious, I was often stopping off for second breakfast and 'elevenses'.

I wanted to try it all, which was hard to manage with sightseeing as well. A meal of platters and microbrew beer at Good George Brewing will go down as one of my favourites. 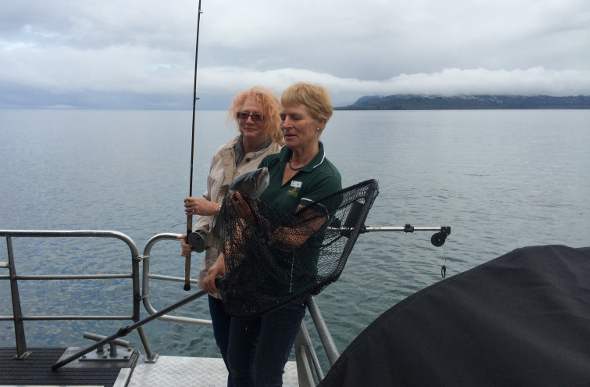 Most fish we caught we released, but this trout was only 30 minutes away from being on our plates

Also up there in my foodie bank is the sashimi and baked trout on the Chris Jolly Outdoors fishing charter, which had been pulled out of the water about 30 minutes prior to eating.

My stomach also won't forget the buffet lunch at Skyline Rotorua. I was defeated at the hand of 42-plus different food types. Quality met quantity and together they still give me food envy.

New Zealand's scenery is renowned throughout the world after it became a huge asset in bringing JRR Tolkien's fantasy Lord of The Rings world to life. I had one experience with this particular New Zealand scenery, standing at the top of Hobbiton out the front of Bag End and staring out across 'the Shire' and out to the fields beyond. 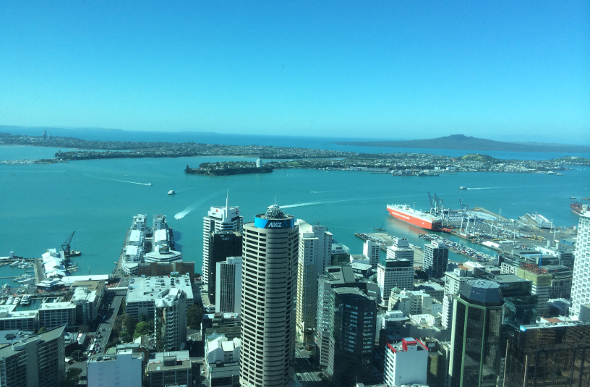 I could see almost all of Auckland from the SkyTower

However, there's more to this country's natural vistas than the places that made it to the big screen. Standing at the top of SkyTower in Auckland, I was able to witness the city and harbour meet the water and then become lost to wild islands further out.

At Skyline Rotorua's restaurant, I was separated only by glass from an uninterrupted view of Rotorua's city and the lake.