Nanneke van Drunen is a Dutch local determined to promote her fascinating country. Nanneke believes many tourists to the Netherlands visit Amsterdam before heading off to another country; which is a shame because the Netherlands has many more beautiful cities that can surprise and delight travellers. 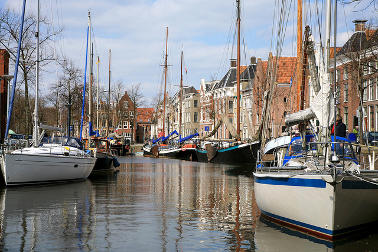 Maastricht
Strolling through the city looking at beautiful old buildings can easily keep you busy, however I recommend you admire the city from the water or by sitting in a horse-drawn coach. Are you into history? You will love a visit to the Kazematten, a network of underground passageways and bunkers used for defending the city against enemies. A walk up Sint Pietersberg hill will give you a fantastic view of the city and its surroundings. It also lets you burn off those calories you may have gained eating at one of the five restaurants sporting a total of six Michelin stars.

Utrecht
Utrecht is located in the middle of the Netherlands and is full of places of interest. The best-known might be the Dom Tower and Dom Church in the city centre however also consider investigating the Janskerk church or the largest brick building in the Netherlands; The Inktpot. Museum Speelklok is a musical museum in the Netherlands. From carillon clocks to self-playing musical instruments you will find it there. Looking for another special museum? Try the Money Museum. Typical for Utrecht are the canals. Explore them by electro-boat, canoes, whisper boat or canal bike.

Groningen
A visit to the architectural city of Groningen starts at the main railway station followed by The Goudkantoor (Gold Office) that is located in the city centre behind the 200-year-old city hall. The much talked-of Groningen Museum houses art and is a work of art in itself. When you visit Groningen, climbing the almost 100-metres high Martini tower is a must. Recently Groningen was chosen as the city with the best city centre in the Netherlands. So shopaholics eat your heart out… And also good to know: Groningen has no fixed closing times, so it's always the perfect time to get the party started.

Nijmegen
Nijmegen is the oldest town in the country. Visit this city and imagine yourself back in the past by looking at beautiful historic buildings or strolling through the parks. Experience the rich history in the Het Valkhof Museum, which includes an important collection of Roman archaeology. You can also discover Nijmegen, and the region, by Solex or scooter. Nijmegen is also famous for the 'Nijmegse Vierdaagse' (Four Days Marches) that are held annually in July. Since 1969 the festivities in Nijmegen's city centre have coincided with the marches. The 'Vierdaagsefeesten' (The Four Days Festivities) are a big event and attract thousands of people from all over the world.

's-Hertogenbosch (Den Bosch)
A must do in Den Bosch is to climb the 220 steps to the tower of Sint Jan's Cathedral. You will be rewarded with a stunning view of the city and its surrounding country side. A unique experience in 's-Hertogenbosch is to take a 'Diezetocht'; this canal system meanders through the city and was used as a fishpond, swimming pool and a waterway in the old days. Now you can sit back and relax while enjoying the cruise. In 2012 the city was elected Capital of Taste and with good reason. You can't leave Den Bosch without having tasted at least one of the many typical treats Den Bosch has to offer, such as the 'Bossche bol' (chocolate pastry filled with whipped cream), 'Bossche kus' (chocolate), 'Bossche koek' (cookie) or 'Koekwaus' (cookie).

Nanneke is a Dutch communications consultant.