Green beer, green buildings, even green rivers – cities from Dublin to Tokyo go all out for St Patrick’s Day (traditionally celebrated on March 17) – with festivals, parades and a whole load of craic. Here are eight places around the world that get their Irish on with the best of them.

A post shared by St. Patrick's Festival Ireland (@stpatricksfestival) on

No surprises that the Irish capital turns on the craic for St Patrick’s Day. In fact, celebrations last four days during the St Patrick’s Festival from March 16-19. You can take a walking tour in the footsteps of the saint, attend a ceili (dance), see the city buildings turn green, visit a pop-up Gaeltacht (Gaelic-speaking area), walk the poetry and spoken word trail, go to the funfair – even see a prawn festival! Of course, the parade on St Patrick’s Day is a must-see, and you can raise a glass of Guinness in any number of pubs.

The City that Never Sleeps holds a massive shindig to celebrate St Patrick’s Day. In fact, it’s the longest-running uninterrupted St Paddy’s parade in North America, dating back to 1762. The parade starts at 44th Street and makes its way along Fifth Avenue, past St Patrick’s Cathedral and Central Park, finishing at the American Irish Historical Society at East 80th Street. If the parade is too much for you, retire to An Bael Bocht Cafe in the Bronx, where you can enjoy Irish food, drink, music and theatre.

A post shared by Tipsy Engineering Podcast (@tipsyengineering) on

Chicago has jumped the gun this year, celebrating St Patrick’s Day Weekend 2017 this weekend (March 11-12). On Saturday, the Chicago River turns green – snag a spot between Michigan Avenue and Columbus Drive. At noon, the Chicago St Patrick’s Day Parade marches down Balbo Avenue, Columbus Drive, and continues north on Columbus to Monroe Street. There’s also a Leprechaun Leap fun run and Get Lucky Half Marathon on the Saturday, with the South Side Irish Parade winding up proceedings on the Sunday.

This French-Canadian city celebrates with a massive parade – Defile de la Saint Patrick – on March 19 this year, starting at the corner of Fort and Sainte-Catherine and finishing at Phillips Square. There are hundreds of floats, marching bands and revellers of all descriptions, attracting up to 700,000 people, depending on the weather. Gather your reserves with breakfast and an Irish coffee at one of the several Irish pubs in the downtown area, and stick around after the parade for live music.

South Boston’s St Patrick’s Day Parade, which attracts up to a million spectators, occurs on March 19 this year, starting at Broadway Station and finishing up at Old Colony Avenue. There are colourful floats, Irish and American pipe and drum bands and lots of people wearing green. Boston Celtic punk rock group the Dropkick Murphys returns to House of Blues for a series of concerts from March 15-17. And there’s also a road race in ‘Southie’, countless pubs playing Irish music, and an Irish Heritage Trail to explore.

Tokyo’s St Patrick’s Day Parade is the biggest Irish event in Japan. This year it’s held on March 19 on the main strip of Omotesando. You can also head to Yoyogi Park for the I Love Ireland Festival, which features Irish music, dancing, sports and food over two days. And don’t miss the Emerald Ball on March 18, celebrating all things Irish.

A post shared by St Patrick's Festival NZ (@stpatricksfestivalnz) on

London’s St Paddy’s celebrations take place in Trafalgar Square on March 19, with a lively parade, music, dancing, leprechaun floats, a street food market and tea tent, Irish bands, and green beer. But there are countless other events around London celebrating the saint, from a St Patrick’s Film Festival (March 17-19), to a Father Ted-A-Thon at The Grand in Clapham, a ‘St Patrick or the Pagans?’ Irish banquet in the surroundings of Hackney Round Chapel, and much more. 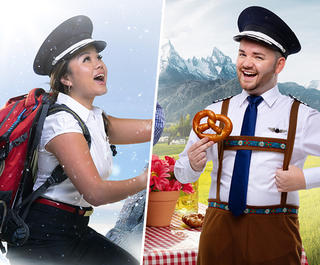 Which Flight Centre Captain Are You?
19 April 2021
There's super organised Samuel in our Brisbane City store, last minute Lena down in Hobart, and fly by the seat of her pants Penny in Adelaide...
Read Time: 0.3 mins
Inspiration

Let's Get Quizzical - Lounge Room Travel Trivia
13 April 2020
Fancy yourself as a worldy, well-travelled lad or lass? Let’s get quizzical! Turn up the tunes, crack open a smar-tinny, put an AFL rerun on the tele
Read Time: 1.8 mins