Feast Your Eyes On These Thanksgiving Day Parades!

Feast Your Eyes On These Thanksgiving Day Parades!

Turkey Day has arrived! There will be time to give thanks and there will be time to gather round the family table to feast ourselves into a food coma. But first, we must parade. Annual Thanksgiving Day parades have become a tradition for families across the US. Many brave the winter elements to celebrate in person while the rest of the pyjama-clad nation enjoys the show on TV.

To help you get in the spirit of the holiday, here's a look at the biggest and best Thanksgiving Day parades across the USA. 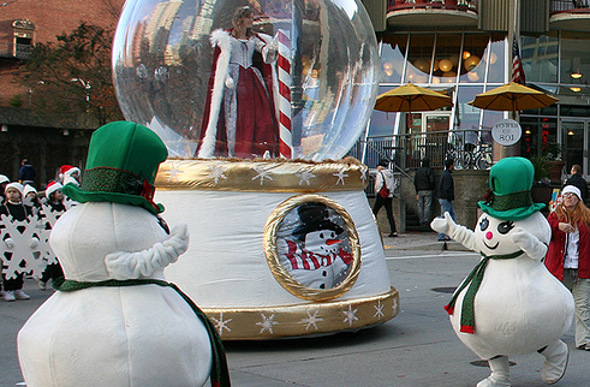 A whole cast of characters dance down the parade route in Seattle
(Image: Lynette Schimming via seattlepipeline.com)

All right, so Seattle's parade isn't technically a Thanksgiving Day parade, but much like it's New York counterpart, it has all the bells and whistles while marking the official start to the Christmas season. Parade goers are treated to colourful balloon floats, costumed characters and a number of local community groups marching along the route. The event culminates in Santa officially opening Santaland at Macy's for the 2015 season. 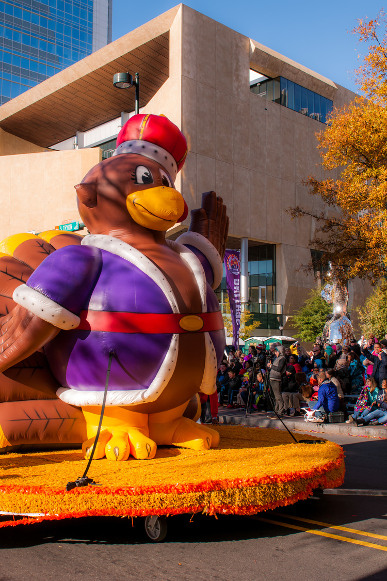 Formerly known as the Carrousel Parade, this local event has been dazzling parade goers since 1947. It has grown from its humble beginnings into the fourth largest Thanksgiving Day parade in the United States, featuring an impressive mix of performers and floats that has reached up to 110 entries in the past. Along with regional bands and local community groups, this year will include 12 giant helium balloons, 13 colourful floats, five of Charlotte's unique 'Segwalloons' – inflatable characters that zip around via segways – and, of course, Queen Charlotte.

Kicking off Thanksgiving Day bright and early, this parade is billed as one of the country's largest and most spectacular. It's the second oldest Thanksgiving Day parade in the US, a title its shares with New York's Thanksgiving parade. There will be floats, marching bands and community groups along with giant helium balloons led down the parade route, but locals know to keep their eyes out for the Big Head Corps and Distinguished Clown Corps. The former are characters wearing oversized papier-mache heads depicting holiday characters and celebrities, while the latter is made up of local community leaders dressed in their finest clown gear. 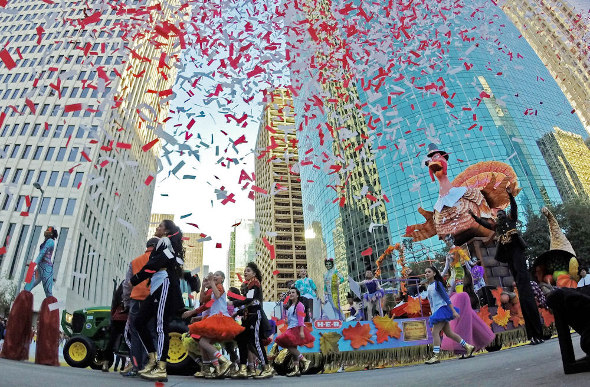 Travelling 20 blocks through downtown Houston, this holiday parade dazzles spectators with a mix of fun and revelry. Each year the parade has a theme, with 2015 showcasing 'Houston on Parade'. It will include the Houston Ballet spotlighting the Nutcracker Ballet, International Weightlifting Federation with athletes from 105 different countries, marching bands, dancers and local community groups. There will also be giant helium balloons that mix old favourites with a few new additions. Tom Turkey and Santa Clause will be among them.

Ranked as one of the best places to ring in the start of the holiday season, Plymouth pulls out all the stops for Thanksgiving. The city celebrates through the entire weekend with events for all ages to enjoy. The parade kicks things off with an official opening ceremony followed by the country's only historically accurate chronological parade. This walking celebration depicts US history from the 17th century through the 21st with 124 units marching down the parade route! Highlights include New Plimmoth Gard firing squad, Model T Antique Cars, walking pilgrims and Native Americans and the barrage of intricately designed floats.

This Chicago parade has become a tradition for families through the city and beyond. It features more than 100 entries marching the parade route, including honoured guests, giant inflatable characters, floats, equestrian floats, clowns (led by Ronald himself)  dancers and marching bands. It also features staged performances, including the traditional performance by Ringling Brothers and Barnum & Bailey cast members and animals! 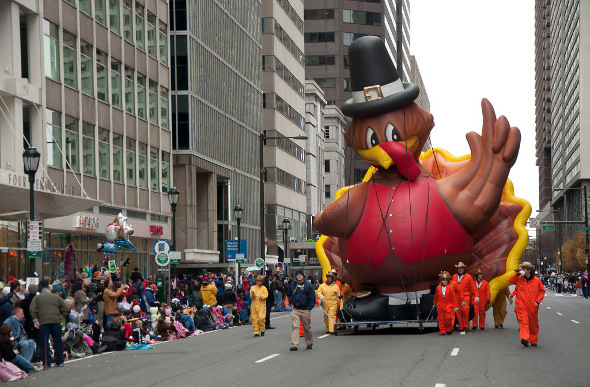 Philadelphia's parade has the honour of being the original Thanksgiving Day parade. Now in its 96th year, the parade is bigger and better than ever, dazzling spectators from around the country with a mix of massive floats, music and dance performers, 15 marching bands and Santa himself to mark the beginning of the Christmas season.  2015 will feature more than a dozen giant inflatable balloons along with more than 30 special guests. This includes Dionne Warwick and Disney On Ice. 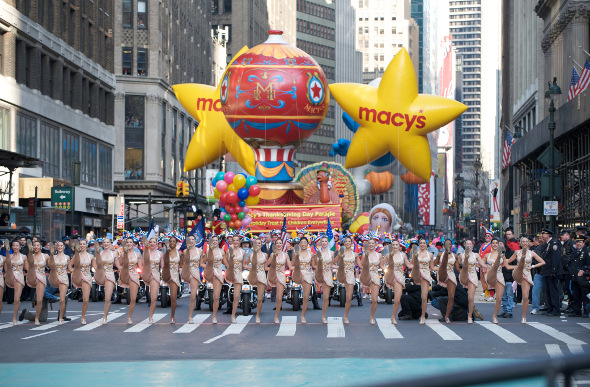 It wouldn't be a parade list without New York's famous Thanksgiving Day Parade. Now in its 89th year, the parade has gained international attention thanks to its national coverage and appearance in several well-known films and television shows. Giant balloons, one-of-a-kind floats, performers from around the country and international celebrities and bands participate in the festivities as the celebration marches 2.5 miles through Manhattan. 2015 will see four new giant helium balloons, nine new floats and 12 new marching bands.