The streets of Utrecht were a sea of yellow jerseys and red-and-white polka-dot trees as hundreds of thousands watched the Grand Depart of the Tour de France. But cycling isn’t the only reason to visit the Netherlands’ fourth-largest city.

Big plans are afoot in Utrecht. The Central Station area, with its hideous 1970s shopping centre, is being completely redeveloped. The masterplan will take until 2030 to complete, but the benefits are being felt already.

There are pop-up stores and parties amid the renovations, and Tivolivredenburg, a state-of-the art concert hall, has opened next door. The Catharinesingel canal, which was filled in during the 1970s, is being turned from a road back into a major waterway, with the first section due to open by the end of this year.

Utrecht has retained its medieval centre, with narrow streets, canals and squares. The canals have a unique 'wharf cellar' structure, meaning the streets are split-level – with lots of bars and restaurants at water level. Gourmet burgers are 2015’s major food trend: with wine at Firma Pickles; with beer at Beers & Barrels; or to take away at Meneer Smakers. 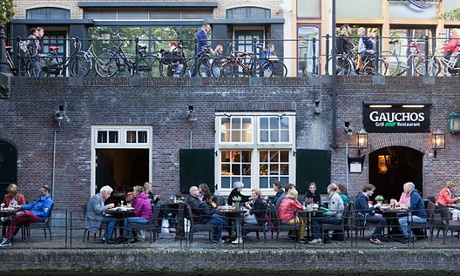 The split-level Oudegracht (old canal) runs through the centre of the city. Photograph: Alamy

Frietwinkel by Dapp, meanwhile, sells nothing but organic chips. As elsewhere in Holland, Indonesian food is fantastic, especially the modern take at Blauw. Craft beer has taken off, with lots of microbreweries opening, such as Maximus, whose taproom is open from Wednesday to Sunday.

Floating along in the Dutch capital: The Canals Of Amsterdam

But there's more to the Netherlands: Top 5 Other Dutch Cities

One of the must-see sights, Dom Tower – the highest church tower in the Netherlands – has a new attraction. DOMunder is an archaeological tour under ancient Dom Square.

After dark, the tower is now lit up as part of Trajectum Lumen, an artistic light installation project. Fifteen of the city’s landmarks are illuminated each night; maps can be downloaded at trajectumlumen.com.

There are lots of great independent shops, including Puha – clothes and accessories; and Katoenfabriek – designer T-shirts.

Boutique hotels are opening in historic buildings, such as the minimalist Mother Goose (rooms from €105/$A155) in a former mattress factory (though the building dates back to 1302), and the Eye Hotel, which opens this summer in a 17th Century former hospital and has an introductory rate of €115 ($A170) a night B&B. 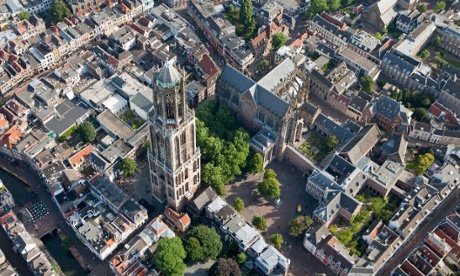 It’s not all about the centre, though; Utrecht’s suburbs are thriving, too. Sought-after Oudwijk, to the east of the centre, has beautiful Wilhelmina Park and lots of new places to eat and drink, such as Boulevard, a Basque bar serving pinxtos and good wines by the glass.

Lombok, a lively multicultural area in the west, has bars and cafes in former industrial buildings, plus swimming spots and even a river beach. Veilinghaven is a hip new neighbourhood on the site of the old fruit and vegetable auction south-west of the city centre.

Utrecht is often described as 'Amsterdam-lite' – the same bikes, boats and bars, but on a much smaller scale. The Tour will help put this dynamic city on the map of weekend breaks.

Visit your local Flight Centre store or call 131 600 for more advice and the latest deals on travelling to The Netherlands.

This article was written by Rachel Dixon from The Guardian and was legally licensed through the NewsCred publisher network.

Rachel Dixon works on travel and features at the Guardian.
more articles from this author