Travelling For Your Sport

Travelling For Your Sport

As Aussies, we certainly love our sport. Being a spectator is more or less an Australian pastime, but it's also great to get out there and enjoy the game, partaking in an individual or team sport. With local teams and many different sporting codes found in different suburbs and regions throughout Australia, it's not hard to find a sport that takes your fancy. Being part of an amateur sporting team that plays competitively also means you'll probably get the chance to travel to away games - whether they be within your own city, intercity, interstate or further away.

Here at Flight Centre, we thought we'd profile a few sports and their associated competitions around the country. 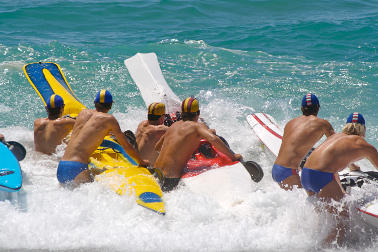 Surf Life Saving
While there are Surf Living Saving Clubs located all around Australia, the Sunshine State is most synonymous with the iconic red and yellow. In Queensland, the 59 Surf Life Saving Clubs boast around 36,000 members, where children as young as five can join a dedicated nipper program and learn importance of beach safety. There are more than 8,000 volunteer lifesavers who keep beach-goers safe throughout summer. For lifesavers who wish to represent their club competitively, there are a variety of meets including the Junior Coolangatta Gold, held annually on the Gold Coast, the Surf Rescue Championships and the State Boardriding Championships.

Soccer
Local New South Wales soccer teams have the option of competing at the Champion of Champions, a tournament conducted by Community Football and generally considered to be the pinnacle of NSW Association based competition. Teams of the same age group compete against each other in a knockout-style event to determine the Champion of Champions. The finals are generally held in October each year, usually at the Valentine Sports Park in Glenwood. However, in 2013 the final will be held at another yet-to-be-announced venue, most likely still within Sydney's boundaries.

AFL
For keen enthusiasts determined to embrace Victoria's principle football code, there are many clubs located in both metropolitan and country regions. Whatever age group you fall into, you're sure to find an appropriate AFL team to join. Beginning in July this year, the AFL Victoria Herald Sun Shield competition will give around 4,500 students from 170 high schools the experience of friendly competition, with the grand final matches played on the hallowed turf of the Melbourne Cricket Ground.

Hockey
There are hockey clubs scattered right around Australia for those who want the chance to compete in the National Championships, held in various locations depending on your age group. While there are no full-time professional hockey players in Australia, amateurs can work their way up to joining the ranks of the Kookaburras and the Hockeyroos.

Flight Centre have Group Travel Experts on hand who specialise in arranging travel for sporting teams. For coaches and managers who would like more information, email Naomi Pirhonen at naomi.pirhonen@flightcentre.com.au or Vanessa Newman at vanessa.newman@flightcentre.com.au.