Exciting news for anyone travelling to the US and planning to visit Universal Studios in Hollywood, California – the dazzling, all-new nighttime light show at The Wizarding World of Harry Potter has arrived. The summertime special feature will thrill visitors as night falls, and then on into the night…

Witchcraft And Wizardry, Set To Music 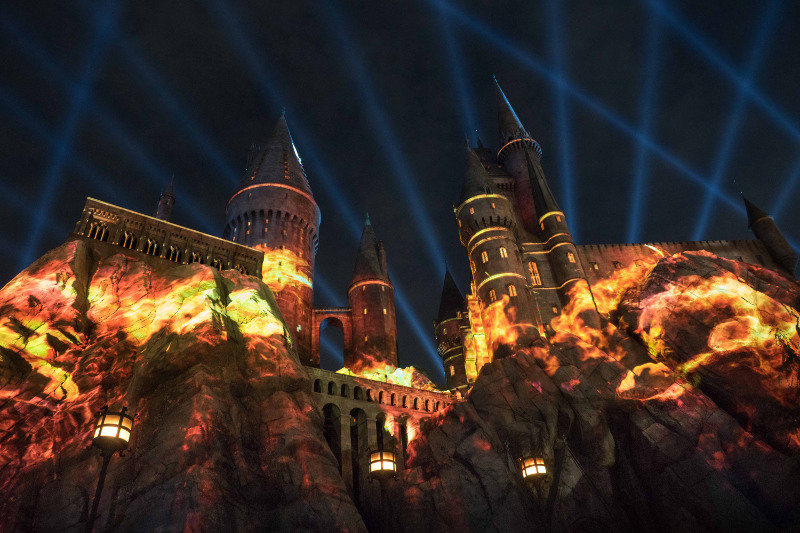 While a wander through The Wizarding World of Harry Potter is sure to surprise and delight fans of the immensely popular books and films, Universal Studios Hollywood has dialled the fun up a giant-sized notch with this incredible new light display.

The Nighttime Lights At Hogwarts Castle is a spectacular light projection against the backdrop of Hogwarts School of Witchcraft and Wizardry. It begins as night falls, and will showcase the four houses of Hogwarts: Gryffindor, Ravenclaw, Hufflepuff and Slytherin.

The awe-inspiring visuals are set to dramatic music, with a special arrangement created by Academy Award-winning composer, John Williams, capturing the mood via surround sound. Williams’ musical arrangement is based on the original scores composed for the Harry Potter film series and was conducted by prolific arranger William Ross, and recorded by the London Symphony Orchestra in London.

From its snow-capped roofs and cobblestone streets to the historic British sensibilities that characterize the whimsical look and feel of the land, The Wizarding World of Harry Potter transports guests of all ages to the scenes they enjoyed watching on the silver screen.

There’s so much to see – and experience. Visitors can take a spin on the incredibly captivating and highly acclaimed Harry Potter and the Forbidden Journey thrill ride, now enhanced with a 4K-HD ride film, projecting at an astounding rate of 120 frames-per-second for an even more immersive glimpse into Harry Potter’s world. There’s also Flight of the Hippogriff for families to enjoy – Universal Studios Hollywood’s first outdoor family coaster.

The Wizarding World of Harry Potter resonates with immense detail, inviting guests to revel in J.K. Rowling’s Wizarding World with the opportunity round-out the experience with unique dining options including the rustic tavern Three Broomsticks and quirky Hog's Head pub, as well as the Magic Neep and Butterbeer carts.

Of course, it wouldn’t be the world of Harry Potter without a one-stop sorcery shop and other wizarding boutiques. Guests wandering through this mystical land will come across Honeydukes, Ollivanders, Owl Post, Zonko’s Joke Shop, Wiseacre's Wizarding Equipment, Dervish and Banges, Gladrags Wizardwear and Filch’s Emporium of Confiscated Goods.

Visit your local Flight Centre store or call 131 600 for more advice and the latest deals on travelling to Universal Studios Hollywood.