A Little (Or Big) Slice Of Heaven: An Eater's Guide To Pizza In The USA

A Little (Or Big) Slice Of Heaven: An Eater's Guide To Pizza In The USA

WARNING: May cause intense food cravings.

The land of the free, home of the brave serves up more pizza styles than anywhere on earth. From sea to shining sea, each region has its own secret twist, and each region fervently defends its pie as the best ever made. We're letting you be the judge. From the gooey, saucey goodness of the deep dish to the innovative flavour combinations of the west coast pies, here's a quick guide to the most popular types of pizza in the good ol' U S of A. 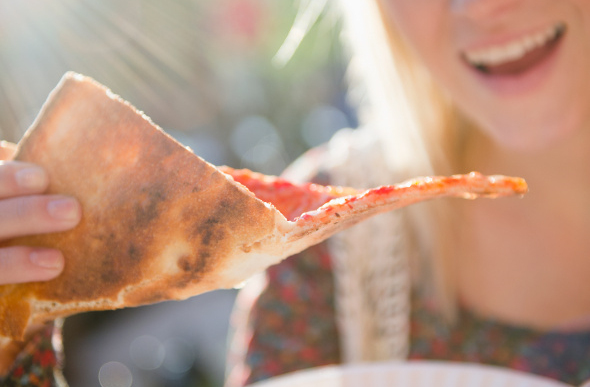 One of the most famous pizza styles in the US, New York style pizza dates back to the early 1900s. It’s mainly characterised by its thin, hand-stretched crust. It must be crisp yet soft and pliable through the middle. Rumour has it that extra authentic crusts are made with New York water, which is said to give it a distinct taste.

Toppings are generally pretty simple, including a thin spread of tomato sauce and mozzarella topped with pepperoni or sausage. The final distinguishing trait of the authentic New York style pizza is, of course, the oversized slice, which is traditionally folded in half in order to eat.

Slice joints are a dime a dozen in NYC, but for the real deal head to Totonnos in Brooklyn. 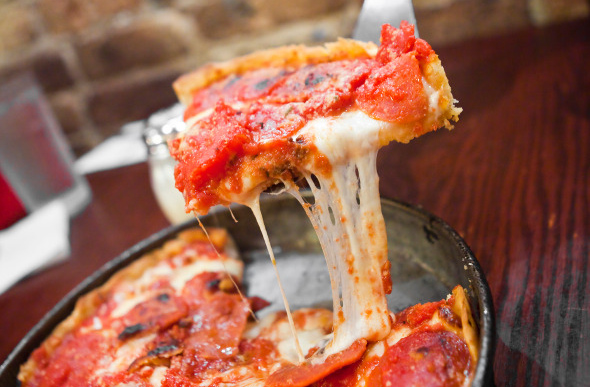 You're gonna want to get your knife and fork out for this one. Rivalling the slice from New York in popularity, the Chicago deep dish is for serious pizza fanatics. While there is no solid evidence supporting the origin of the deep dish, it’s widely believed that it started at Chicago's Pizzeria Uno in 1943.

Its defining feature is its very deep crust that resembles more of a pie. Created with specially designed pans that typically run approximately three centimetres deep, this pizza is then filled with toppings … in reverse order. To avoid burning the cheese, sliced mozzarella is added first, followed by various meats, onions and peppers, and topped off with a thick layer of sauce.

Lou Malnati’s Pizzeria in Chicago. Their recipes have not only been handed down for generations but they’ve also been voted the best in the city. 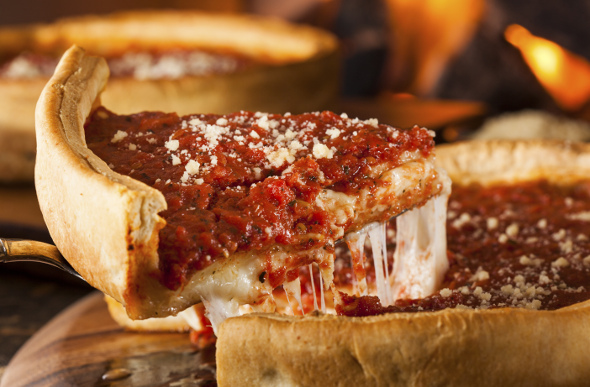 Like a deep dish with a lid (Image: Getty)

A variation of the Chicago Deep Dish that defies all reason, the stuffed pizza is even deeper and more stuffed with toppings. Established in Chicago in the mid-1970s, this serious pie is half deep dish and half scarciedda (also known as Easter Pies, these are meat 'pies' with meat and/or cheese between two layers of crust).

Stuffed pizza is constructed in a similar manner to its deep dish counterpart, with a layer of sliced mozzarella followed by various meat and veggies. To keep all of that goodness together, it's topped off with a second, thinner layer of dough (known as the lid), which is smothered with sauce.

Giordano’s in Chicago. They did help conceive the stuffed pizza genre after all. 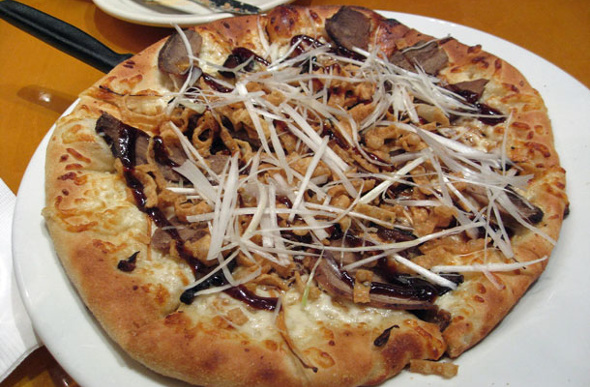 Not your typical toppings (Image: Seriouseats.com)

Or US festivals dedicated to food? Grab Your Bib: Top 10 American Food Festivals

Refusing to be left out of the pizza game, the west coast created their own tasty version with the California style pizza. Traditionalists argue that it's not really pizza due to its controversial approach to toppings. This relatively modern style was created around 1980 in the San Francisco Bay Area. It is widely credited to Ed LaDou. 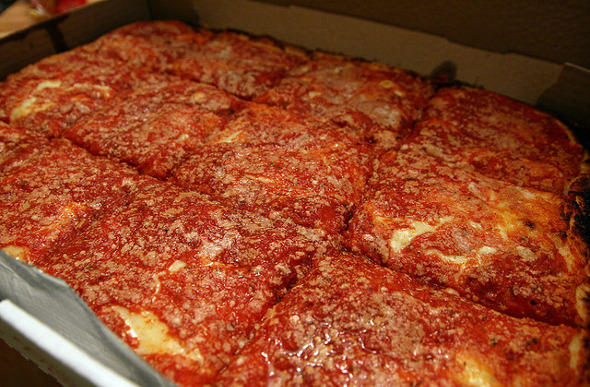 Sometimes called Grandma’s or Nonna’s Pizza, this style evolved around the time that Italian immigrants were settling in the US. Many were setting up Italian bakeries in New York, which is where this new pizza concept was created in the US.

Not to be confused with Sicilian pizza, Sicilian style pizza offers a thick, bready crust. Rather than being round, it's rectangular and is served in square slices. Traditional Sicilian style pizza has a strict line-up of toppings, which include tomato puree, oregano and grated romano cheese. Mozzarella is a definite no-no for purists, but these days toppings can be more varied.

As this thick and tasty pie originated in New York, it only makes sense to find the best slice there. Try L & B Spumoni Gardens for a traditional Sicilian style slice. 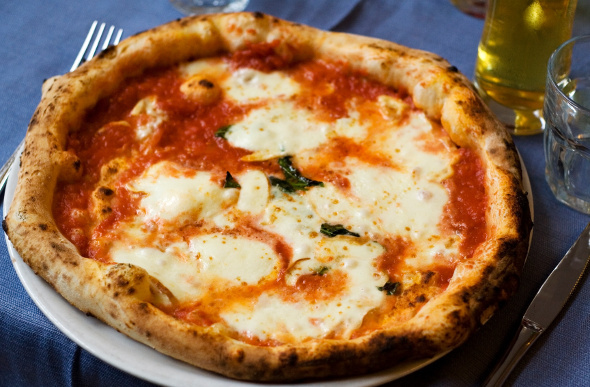 This type of pizza is the most authentic of the bunch. Inspired by traditional Italian recipes, Neapolitan style pizza originated in Naples before the 1700s. It came over to the US with the influx of Italian immigrants through the late 1800s. While the recipes may have adapted, the defining features are very much the same.

You can spot a Neapolitan style pizza thanks to its smaller size and thin crust with a puffy outer crust. Toppings are simple and sparsely placed, often only consisting of tomatoes, basil and buffalo mozzarella or fior de latte. Some variations include anchovies.

Spacca Napoli in Chicago does a mighty fine authentic Neapolitan style pizza. They even have the seal of approval from the Associazione Verace Pizza Napoletana. 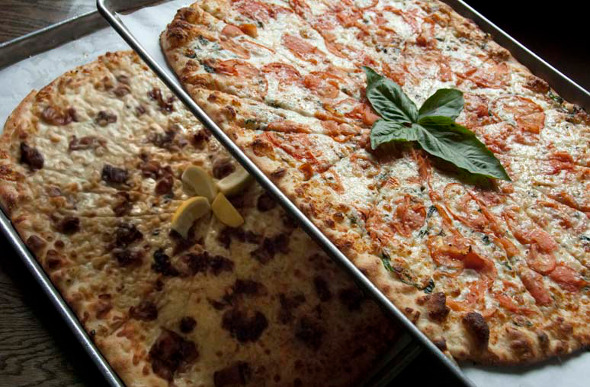 More commonly known as 'apizza' than straight up pizza, this unique type of pie originated in ... you guessed it, New Haven, Connecticut. Frank Pepe Pizzaria Napoletana created the first New Haven style pie, which quickly gained popularity throughout the region.

With roots in the traditional Neapolitan style, the approach is basic. A very thin crust is often an oblong shape rather than round and is covered with oregano, tomato sauce and a little bit of pecorino romano cheese. You can get it with other toppings, but you'll have to ask for them. Pepe is also famous for his White Clam rendition, featuring olive oil, oregano, grated cheese, chopped garlic and fresh littleneck clams.

Head to the home of the New Haven style pizza for the best pie: Frank Pepe Pizzeria Napoletana in New Haven. Established in 1925, it's one of the oldest pizzarias with many touting it as one of the best in the country. 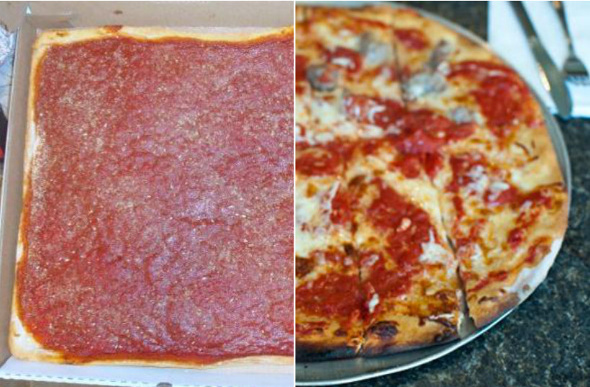 Thick or thin, sauce is always on top

There are two types of tomato pie, one originating in New Jersey and the other in Philadelphia. The former is closer to the Neapolitan approach, while the latter is its own take on the Sicilian style. Origins are thought to be around the late 19th century in their respective regions.

We're talking two pretty different approaches to creating the tomato pie, but the basic premise is similar: sauce over toppings.  Jersey style pies feature a thin, round crust topped with mozzarella, meat  and a thick slathering of sauce. They are served piping hot in traditional slices.

Philly style pies offer up a thick, bready crust with toppings that are also covered in a lot of sauce. Cheese may or may not be added, depending on your preference. These pies are often served at warm or at room temperature in square slices.

In New Jersey, head straight to De Lorenzo's, home of the original tomato pie. In Philadelphia, Corropolese Bakery and Deli is consistently ranked at the top for fabulous tomato pies. 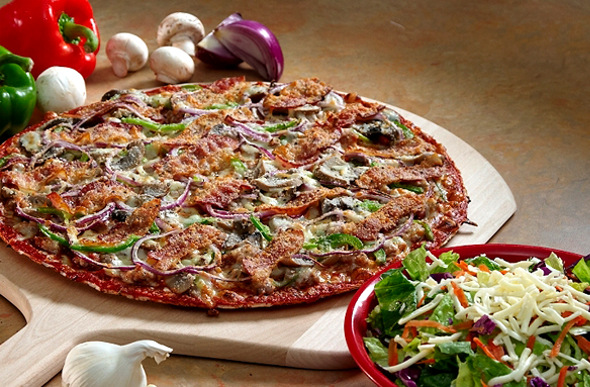 This unique type of pizza is popular throughout the midwestern areas of the US, having originated in St Louis. It's one of the more controversial pizza types in the country, with people who really love it or really hate it. It was created around the late 1960s at Imo's Pizza.

This style will not be mistaken for any other type of pizza thanks to some very defined characteristics, starting with the crust. It's super thin (made without yeast) and super crispy like a cracker. It features Provel cheese (a processed cheese featuring a combination of cheddar, swiss and provolone) and is heavily laden with toppings. Think edge to edge coverage. And though the pie is round, the slices are cut into squares.

You gotta go to Imo's if you want an original St Louis style pizza. Luckily, there are several locations throughout Missouri, Illinois and Kansas.