Queen Victoria looks lost. Not, perhaps, at first glance. Here on Belleville Street she is framed by the expansive lawns and neo-Baroque sophistication of the British Columbia Parliament Buildings – the latter spiralling magnificently into the heavens, a cloak of copper on its noble main dome.

But the more I stare at her, the more I decide she seems out of context. Maybe it is her age – the statue casts her as the young ruler of the 1840s, not the more familiar scowling matriarch of her twilight years.

Or maybe it is her distance. In this genteel, small city which bears her name, she is nearly 8,000 kilometres from the gates of Buckingham Palace.

Vancouver Island is an unlikely locale for a British empress. The edge of a continent, it is the largest outcrop on the west coast of North America; the biggest Pacific island east of New Zealand – 465 kilometres long, 80 kilometres wide at peak breadth. 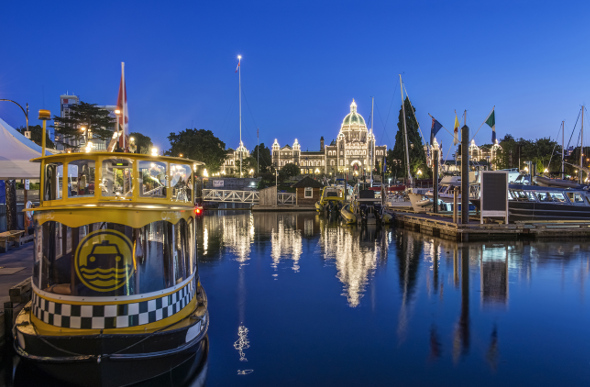 It may not be a country in status, but it could be in size – so vast it hems a border, its lower portions lying west of the US state of Washington rather than the home fires of British Columbia. It also speaks for the latter. Victoria is the capital of the most south-westerly of Canada's 10 provinces – despite being eclipsed in profile by its mega-neighbour Vancouver; despite the fact that, raw and unsullied in many areas, Vancouver Island scarcely resembles a government hub.

A Big Cat Dazed But Defiant

And yet an empress it has. The Empress Hotel could not be anything but a relic of British days of empire.

Victoria was founded in 1843. By 1908, it had its luxury retreat. Roaming the corridors of this 5-star palace, I am teleported to the colonial era – dreams of India in the tropical decor of the Bengal Lounge; the clipped elegance of afternoon tea, cutlery chiming on crockery.

There are further royal flushes, too, in photos of the current Queen visiting the hotel in 1971 and 1994.

It is as I am walking down the back stairs that Vancouver Island shows its teeth.

Here is a different snapshot – a tense Nineties evening, two men carrying a tranquillised cougar which has strayed into Victoria. The cat is dopey, head lolling. But its drugged eyes exude feline threat, as if to say: "Build all the hotels you want. This is not a place you can tame." 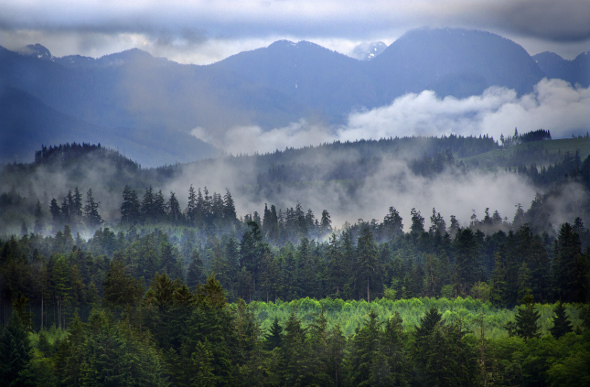 I have already had a hint of this message on my way across – skidding low over a rugged realm of blue and green on a 40-minute seaplane flight from Vancouver, the skyscrapers of the metropolis receding, to be replaced by the broken shards of the Gulf Islands.

There they are in the water below, strewn across the Strait of Georgia – outposts with such names as Salt Spring Island and Prevost Island.

And then the splashdown, direct into the quaintness of Victoria harbour, boats asleep on calm tides.

A Road Trip To Adventure

It does not prove difficult to slip back into the wild. At Fisherman's Wharf, I join an afternoon whale-watching trip with Eagle Wing Tours – and soon we are speeding around the bottom of Vancouver Island, the US hazily visible across the Strait of Juan de Fuca.

Two Steller sea lions are squatting on the base of a floating lighthouse in the Haro Strait. Their gruff barks direct us north, on into Swanson Channel and Active Pass, where three transient orcas are breaching the surface against the splendid backdrop of Mayne Island.

It would be easy to tarry here, hypnotised by these graceful oceanic wanderers.

An orca at play in the Strait of Georgia

And indeed, many visitors go no further, limiting their time on Vancouver Island to Victoria, and perhaps a foray into the manicured charm of Butchart Gardens, 19 kilometres to the north.

But I am transfixed by the idea of a journey; of a road trip that is every bit as adventurous as a foray across dusty Arizona, yet attempted by far fewer – the full length of the island.

I search out the north-westerly Highway 1 and find myself snared by suburbia, Victoria clinging on in cul-de-sacs and car dealerships.

It is only as the Tarmac climbs to meet Mount Malahat that urban life starts to drift. From a lofty viewing area, the Strait of Georgia's might is clear – 240 kilometres long, up to 55 kilometres wide, falling in fathoms, so deep that a bridge over it, while mooted, would be an engineering miracle.

A Parting Gesture To Bricks And Mortar

On this hot day, though, it is in playful mood, sunlight flickering on its face. Back on the road, signposts for local wine producers – Enrico, Blue Grouse, Cherry Point – promise warm, woozy afternoons.

Progress is straightforward, mainly because, for the initial 100 kilometres out of Victoria, the road is the first burst of the Trans-Canada Highway. It feels strange to forge north and west on a continent-conquering route which ebbs 8,030 kilometres east, chasing the dawn all the way to Newfoundland.

Somehow, it is a relief to reach Nanaimo, where the highway's inimitable markers – white maple leaf on green background – vanish at a port whose ferries connect drivers to the remaining 7,980 mainland kilometres of asphalt. 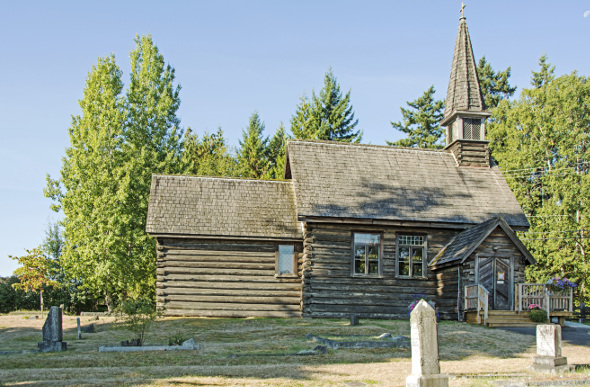 Neatly arranged opposite the grand curve of Gabriola Island, all seafood eateries and small hotels, Nanaimo could be an intermission – a parting gesture to the bricks and mortar of town life. Beyond, progress is slower, the road – now Highway 19 – narrower, the sights alongside even more conducive to photo breaks.

Nanoose Bay is a thing of beauty, the land curling back to create a pretty inlet.

Qualicum Bay – reached by taking the unhurried 19A through little Parksville – is just as glorious, evening light swooning upon it. I rest at the waterside Kingfisher Resort, just south of Courtenay, and wake to the spectacle of orcas rising and diving in the Strait.

This will not be a lone wildlife incident. Back on the 19, near Campbell River, something is dead on the hard shoulder. Squashed, its essence smeared red, the animal has conceded all identity to a thud of wheels.

But before I can think what it might have been, a shadow descends, a colossal turkey vulture – more B-52 than bird – swooping in my windscreen. I swerve, unsure who would suffer most in any impact, and I manage to avoid it.

The road arcs inland through increasingly mountainous terrain, trees crowding the camber, the ghost of a defunct railway line lying to one side.

Totem Poles On The Waterline

Certainly, I feel utterly removed from the British Empire when I stand on the dock in Port McNeill, to be met by Mike Willie. A quietly spoken man, he represents a side of Vancouver Island which existed long before queens and coronations – and via his company, Sea Wolf Adventures, showcases First Nations culture in this faraway landscape.

We bounce across Queen Charlotte Strait to Cormorant Island and Alert Bay, where the majority of the population is Kwakwaka'wakw.

The village's heritage is instantly apparent in the totem poles on the waterline – fiery eagles, wide-eyed beasts – but this is no trite indigenous floorshow. 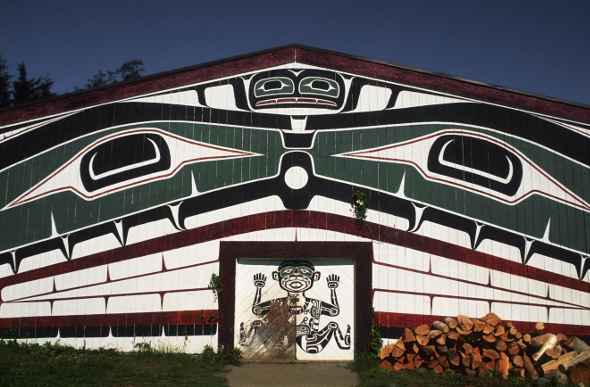 On the other edge of town, two structures tell a tale of shade and illumination. One, a dingy schoolhouse dating from the 1920s, was the local centreground of authority attempts to 'educate' First Nations children into 'civilisation', and the speaking of Kwakwaka'wakw languages was suppressed, often by force.

Next door, the U'mista Cultural Centre is a bright act of revival, partly a museum where head-dresses, masks and other items used in Potlatch – a gift-giving ceremony, not so different to Christmas in generosity of spirit, which was banned from 1885 to 1951 – are displayed.

Potlatch is now restored as a crucial part of the calendar, its rich rituals playing out in the Big House, the community focal point on a hilltop above the harbour.

I sleep soundly on the cusp of that harbour, sinking into a soft bed at the Seine Boat Inn. At dawn, I catch an early ferry back to Port McNeill, then dash the last 43 kilometres of Highway 19 to Port Hardy.

Caked In Mud On An Epic Shore

Vancouver Island's end of the line is no busy whirlwind – the rustic simplicity of Bear Cove Cottages, gazing at their titular inlet; the cosy Cafe Guido on Market Street. I grab a coffee at the latter and wait.

Dave Trebett arrives dressed for business – his business, North Island Daytrippers, being guided hikes – with the news that I have not, after all, reached my odyssey's conclusion. 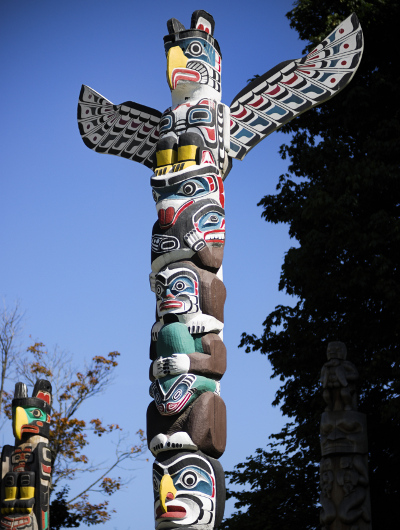 From another time yet still alive

Soon we are slip-sliding west down an unpaved, pockmarked 'road', through the swarthy logging town of Holberg, dodging huge trunk-laden trucks as they thunder past at unnerving pace.

Our target, though, is protected from chainsaw brutality.

With its colleague, Cape Scott Provincial Park, Raft Cove Provincial Park forms the north-west tip of Vancouver Island. Where the 'road' expires, Dave points to a six-kilometre trail that leads to the beach – over tumbled logs and gnarled roots, through deep puddles, down steep banks.

I reach the shore, caked in mud, to find an epic sweep of grey where wind and ocean howl. There is no one else here, the only footprints left by prowling wolves. I look to the bare horizon – and know that here, thrillingly, I am just as out of context as any 19th Century monarch.

Visit your local Flight Centre or call 131 600 for more advice and the latest deals on travelling to Vancouver Island.