Creating an enchanting backdrop for one of the world’s greatest love stories, Verona is quite possibly Europe’s most romantic city. Ringed by snow-topped mountains, the ancient city of Romeo and Juliet is filled with Gothic cathedrals, treasure-filled palaces, and a 2000-year-old amphitheatre that provides an atmospheric setting for open-air opera in the height of the summer.

Originally constructed in pink marble Verona retains its rosy hues, and its reputation as one of Italy’s most prestigious cities. The beautifully preserved historic centre is compact enough to explore on foot, and its marble foot paths and cobblestone streets lead you on a journey back in time. Buildings are coloured in mottled pastels, statues of mythological figures dominate the plazas, and the numerous churches and galleries are filled with priceless works of art. 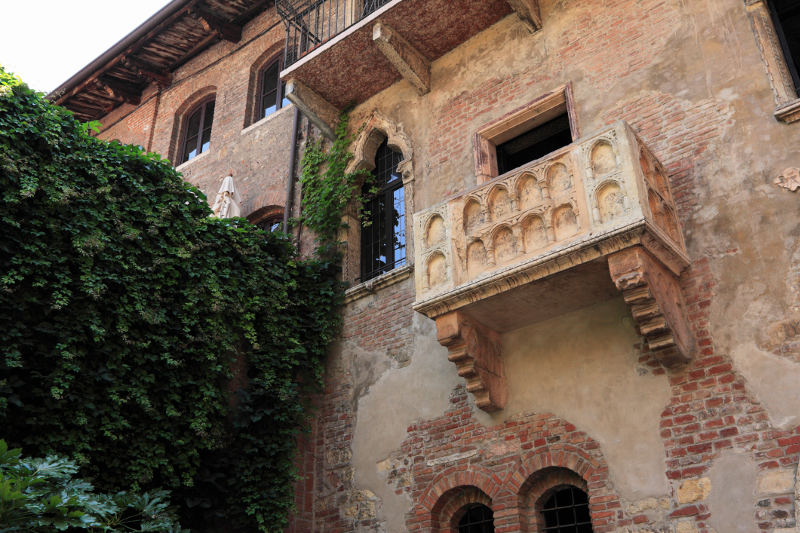 Immortalised by Shakespeare as the city of love, Casa de Giulietta (Juliet’s house) is understandably Verona’s most popular attraction. Entering through an archway you come to a courtyard with a bronze statue of Juliet. Touching her right breast is said to ensure luck in love, as is posting love vows and notes onto the walls. Up on the balcony – which looks exactly as you would imagine – girls enjoy their ‘Juliet moment’ swishing their hair and posing seductively for their boyfriends.  While it is highly unlikely that Romeo and Juliet actually existed, at least not as Shakespeare would have us believe, the Veronese are not about to let truth get in the way of a great story. The graceful city with its timeless beauty, poetic symmetry and historic family feuds certainly sets the ideal scene for an epic tale of love. 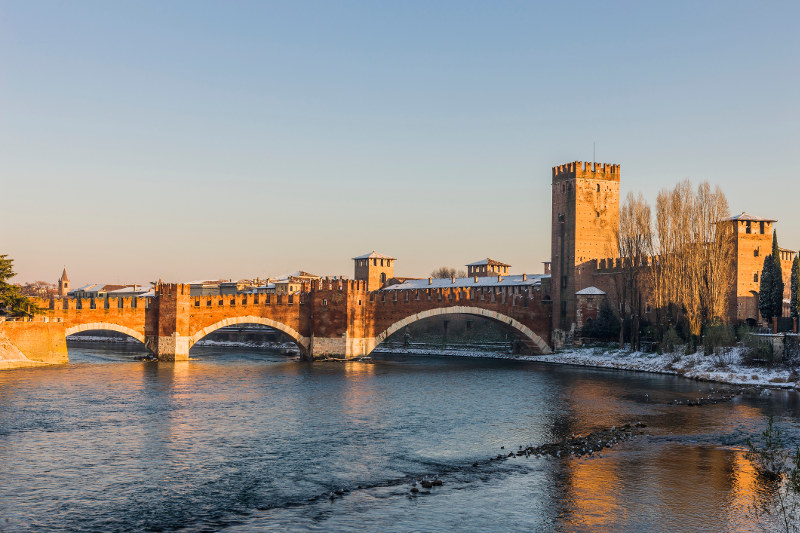 Pasticcerie (pastry shops,) specialise in sweet biscuits known as baci di Giulietta (Juliet’s kisses) and sospri di Romeo (Romeo’s sighs,) while the Juliet Club is run by a dedicated group of Veronese matrons who answer thousands of letters sent every year – some addressed simply to ‘Juliet, Verona.’ Fuelling the story of star-crossed lovers is the long-standing domination of the city by powerful family dynasties. The Della Scala family who rose to prominence in the 14th century built so many elegant monuments to celebrate their power that a style of architecture, Scagliere was named after them. The family became so loathed that they had to build and live in the grandiose fortress of Castelvecchio, complete with towers, battlements and an impressive fortified bridge. These days the magnificent sprawling castle is home to Museo di Castelvecchio  with an astounding collection of jewels, statues, paintings and ancient weaponry. 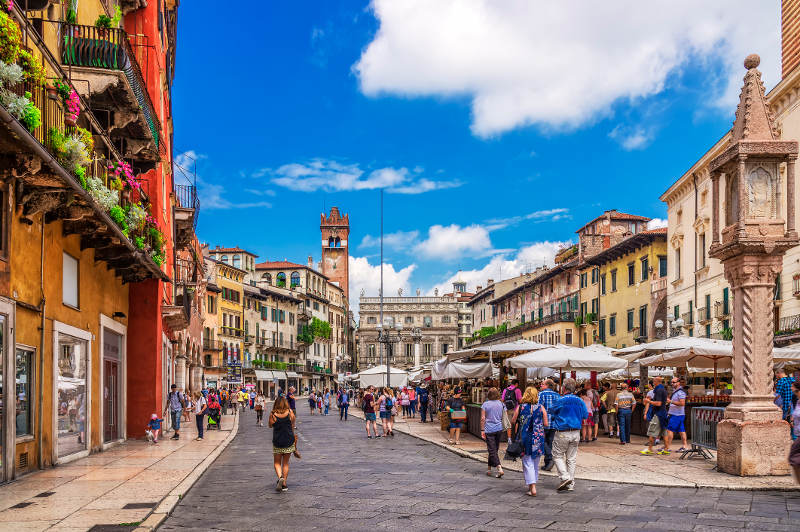 Piazza Delle Erbe has been the location of a fresh produce market for 2000 years.

The heart of the city is the Piazza delle Erbe  Piazza delle Erbe. Once part of the Roman Forum it has been home to a fresh produce market for 2000 years, and in the summer months colourful stalls brim with peaches, cherries and strawberries plucked fresh from the orchards that skirt the city. A crown of magnificent buildings ring the plaza. Statues of ancient gods perch atop the Palazzo Maffei, and the facade of Mazzanti house is covered in pastel-hued frescoes. 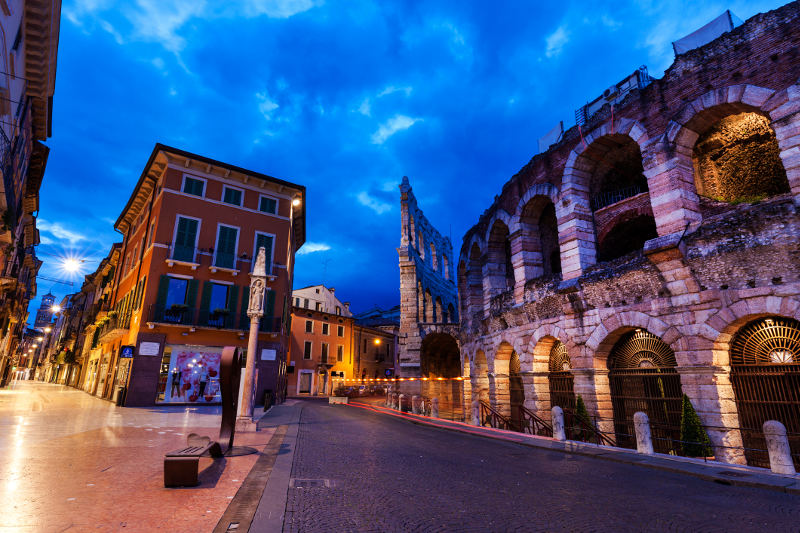 L'Arena in Piazza Bra, is far better preserved than the Colloseum in Rome.

Piazza Bra, is home to L'Arena, an amphitheatre in a far better state of preservation than the Colloseum. Once the site of bloody and gruesome gladiatorial combats, the arena’s amazing acoustics and immense staging now make an enthralling outdoor settings for a starry night of Lyric Opera. Even if you aren’t an opera lover it’s an experience not to be missed, however conditions are much the same as they were in Roman times, so if you opt for the cheaper stone bench seats make sure to rent cushions.

While summers are lovely, I have always found Verona at its most enchanting in the colder months, and I can pinpoint the exact moment my own love affair with the city began. It was a stark midwinter’s day. The air was frosty, the cobblestone streets were empty and the atmosphere distinctly medieval. As darkness fell  snowflakes filled the air and we ducked into a cosy osteria to drink strawberry wine and warm our hands above a crackling fire. Wandering back into the night we found the city blanketed under a carpet of glistening snow. Who needs Romeo and Juliet?  Verona is a magical love story all on its own.

A well-seasoned freelance travel and lifestyle writer, Alison travels the globe, immersing herself in foreign cultures and documenting her experiences through words and photographs. These days Alison is based in Bali and has just completed her first book Kava Cannibals and Curses, about her time living with a remote community in the Fiji Islands.