The narrow road curves around a steep rock face, revealing a scene so dramatic it’s a wonder distracted drivers don’t steer straight into the Atlantic Ocean far below. Green fields demarcated by ancient rock fences roll towards a cliff which looms above pristine ocean bays, home to frolicking dolphins.

Save for a few dozen sheep milling around near the cliff’s edge, this slice of utopia is empty. It’s a ruggedly beautiful place which has barely changed in centuries, except for a couple of humble stone cottages in the distance. This is the kind of raw scenery which draws more than 100,000 Australian tourists to Ireland each year. Ireland is so tiny in comparison to Australia that it looks, at first glance, as if you could almost drive around the whole island in a day. 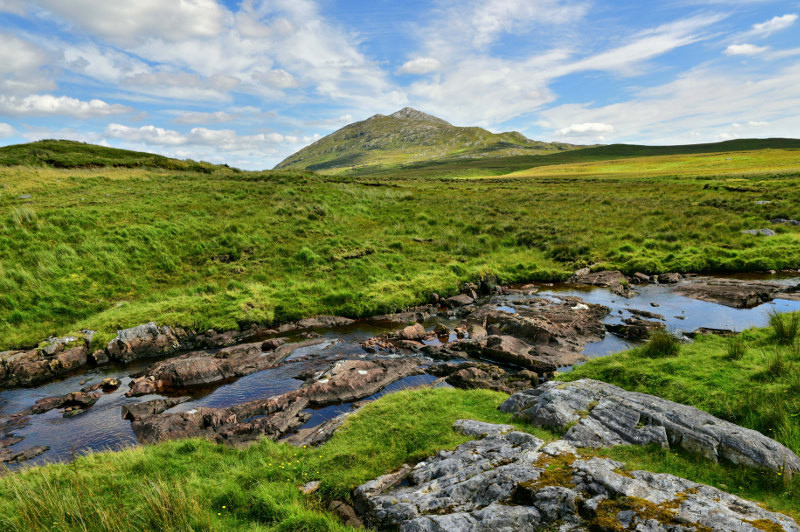 Connemarra National Park is one of the rawest parts of Ireland. Image: Ronan O’Connell

It may be less than one third the size of Victoria in land mass, but the Republic of Ireland is remarkably abundant in breathtaking landscapes and intriguing historical sites. Its compact nature makes it one of the best countries in the world for self-drive tourism. The gem in its crown is The Wild Atlantic Way (TWAW), a 2,500 kilometre driving route along the west coast of Ireland billed as one of the world's ultimate road trips. 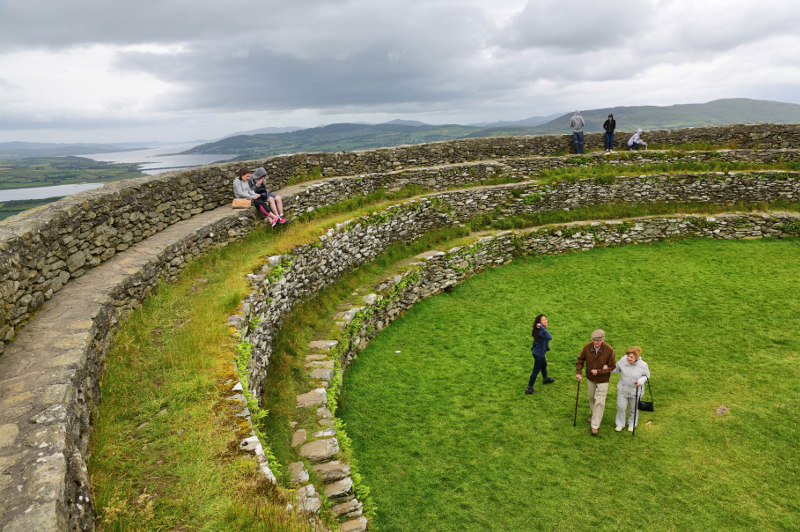 Grianan of Aileach is an ancient fort at Inishowen, County Donegal, and believed to be at least 1,500 years old. Image: Ronan O’Connell

Among the most untamed regions in all of Europe, the west is Ireland at its most Irish – embellished by jagged mountains, soaring sea cliffs, stunning beaches, ancient castles, quaint farming towns, and the country's friendliest people. I know this region intimately, having driven up and down this coast regularly in recent years, documenting its beauty with my camera while living in County Mayo. 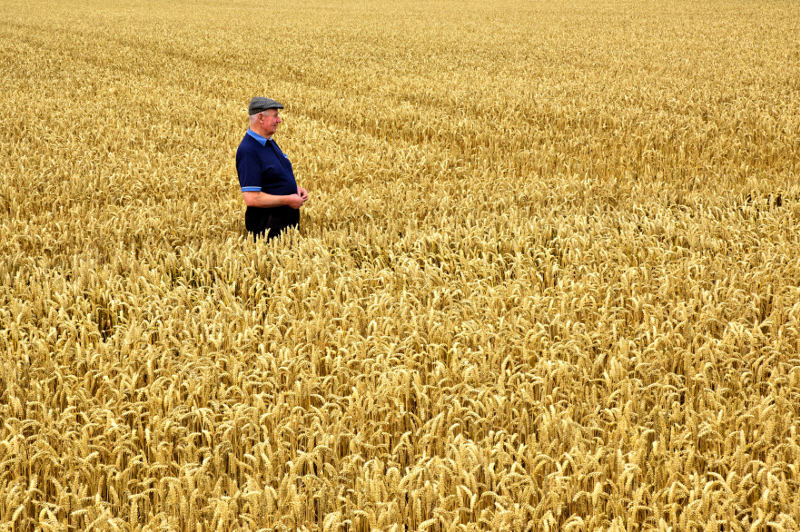 A farmer tends to his field in County Cork. Image: Ronan O’Connell

Mayo is one of nine counties TWAW courses through, along with (from north to south) Donegal, Sligo, Leitrim, Galway, Clare, Limerick, Kerry and Cork. Some of these counties were already firmly embedded in Ireland’s tourist trail – Galway thanks to its legendary nightlife, Clare because of the dramatic Cliffs of Moher, Kerry due to its endless gorgeous landscape, and Cork via its amazing castles and charming capital city.

What TWAW has done, since it was launched by Tourism Ireland in 2014, is to introduce tourists to isolated corners of Ireland which were previously anonymous, particularly in Mayo, Leitrim, Donegal and Sligo. It is these out-of-the-way places which offer some of the most authentic and memorable experiences Ireland has to offer.

Treasures to Discover Around Every Bend

The Wild Atlantic Way starts up north on the windswept Inishowen Peninsula in Donegal and ends in the deep south at one of Ireland’s most picturesque towns, Kinsale in Cork. The most northerly point in Ireland, Inishowen, is strewn with historic sites and is one of the filming locations for the forthcoming Star Wars blockbuster, The Last Jedi. 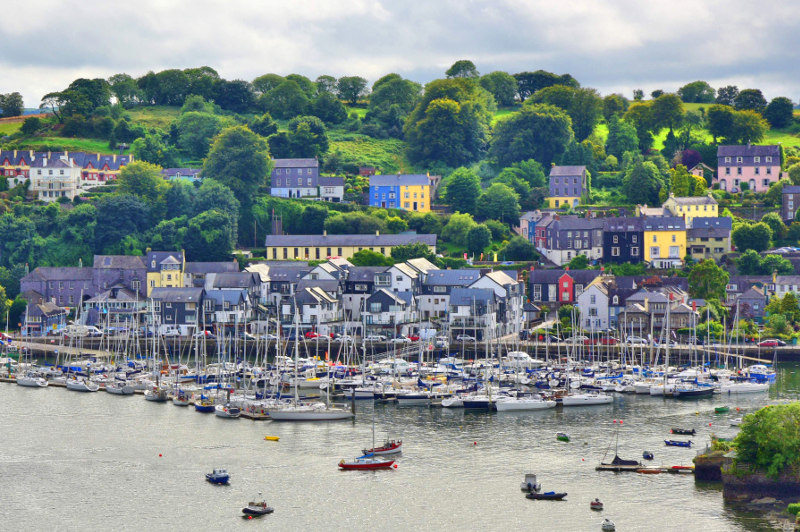 Originally a medieval fishing port, Kinsale is one of the most picturesque towns on the south west coast of Ireland. Image: Ronan O’Connell

The opening scene of The Last Jedi trailer, meanwhile, features the otherworldly island of Skellig Michael, a rocky outcrop topped by the ruins of a monastery which is located at the opposite end of TWAW in Kerry. In between those two Star Wars locations are dozens of spots which have a startling cinematic quality. 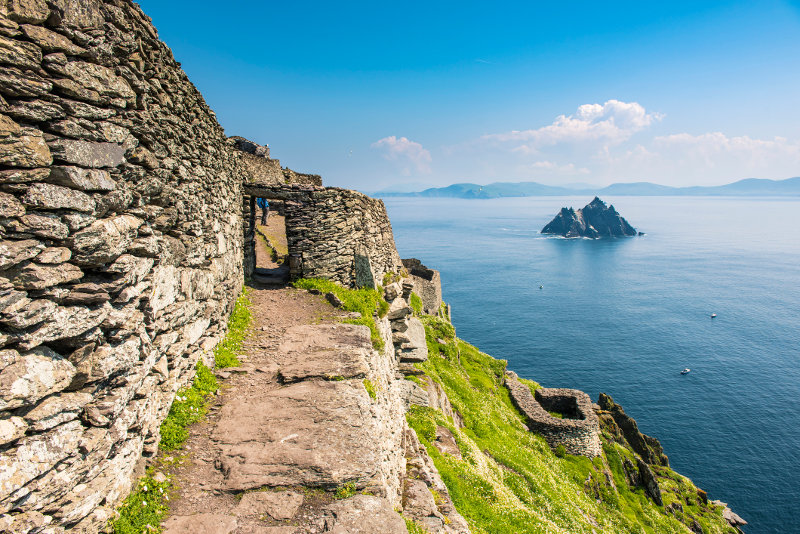 Europe’s highest sea cliffs, Slieve League in Donegal, rise 600 metres above sea level and are almost three times higher than the Cliffs of Moher. Drive further south along TWAW, passing by the surf hotspots of Sligo, and you’ll find some of Europe’s most immaculate beaches on Achill Island. 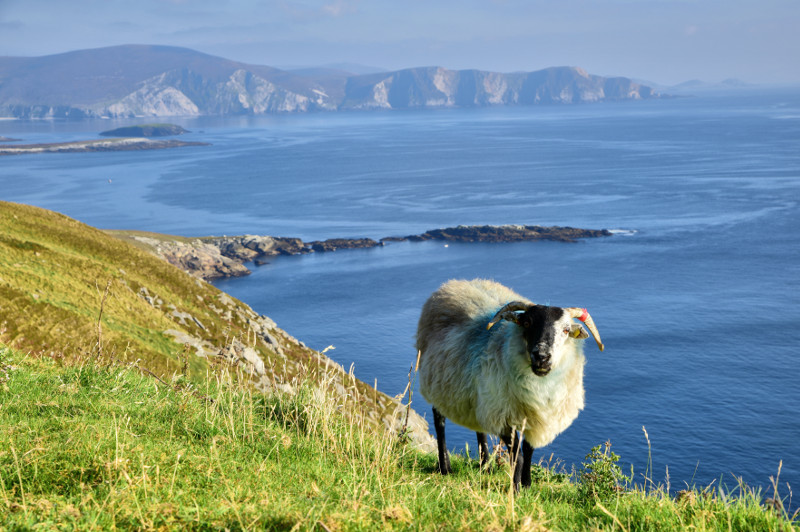 Achill is flanked by Westport, my favourite town in Ireland, a beautiful place tailor-made for postcards where the pubs heave with revellers dancing to traditional Irish music. Westport is a gateway to the most unique part of Ireland, the barren yet spectacular mountainous countryside of Galway’s Connemara National Park. Following TWAW further south, into the most touristy part of Ireland, you’ll encounter endless engaging towns, enchanting scenery and amiable locals. The real beauty of this incredible coastal route, however, is the array of secrets it has unlocked in Ireland’s mid-west and north-west.

Nestled within the woodlands of Northwest Ireland, Lough Eske Castle (a Solis Hotel & Spa) is a lovingly restored 5-star castle-hotel combining a historic past with contemporary elegance.

The Trident is a 4-star hotel, spectacularly located on the water’s edge overlooking Kinsale Harbour and in the heart of the historical district.

This award-winning 4-star hotel towers dramatically over the Garavogue River, and offers contemporary accommodation in the heart of Sligo.

This hotel is in a fantastic location, with views over the sea as well the mountains. Said to be the home of the best hotel breakfast in Ireland.