Wild Encounter On The Coorong

Wild Encounter On The Coorong

Remember Storm Boy, the heartrending story by Colin Thiele about a boy who wandered alone along the coast of South Australia’s Coorong, near the mouth of the Murray River? He lived a sheltered life with his dad in a hut among sand dunes facing the Great Southern Ocean and formed a special bond with a pelican called Mr Percival.

Standing on the dunes looking across the Murray mouth, the thrill of being here hits with a rush.

Not just because this is the place that inspired Thiele’s timeless story, but also because the backdrop is even more stunning than imagined. Despite the well-known classic, this place is one of South Australia’s best-kept secrets.

Stretching more than 130 kilometres, the Coorong is just over one hour’s drive southeast of Adelaide. The Coorong and the Younghusband Peninsula comprise a string of spectacular, tranquil saltwater lagoons, which are sheltered from the raging Southern Ocean by sweeping sand dunes. 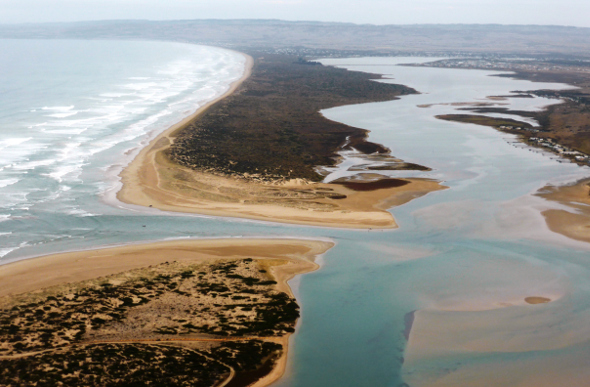 The best way to experience the Coorong is by kayak. Our guide, Brenton Carle, first fell in love with the place when he visited for a camping and fishing trip in 2005, and despite the effects of persistent drought, he could see its undying beauty.

On completing an eco-tourism degree and having gained a greater understanding of the Coorong’s incredible biodiversity and history, Brenton launched his business, Canoe the Coorong, in 2010.

The impacts of prolonged drought left the Coorong on the brink of collapse. But in late 2010, high flows of freshwater returned and with the help of several projects to sustain native vegetation, fish and local communities, this fragile environment began to recover.

Listed as an International Wetland of Importance and a significant archaeological site, today the marine life, flora and fauna is once again abundant. 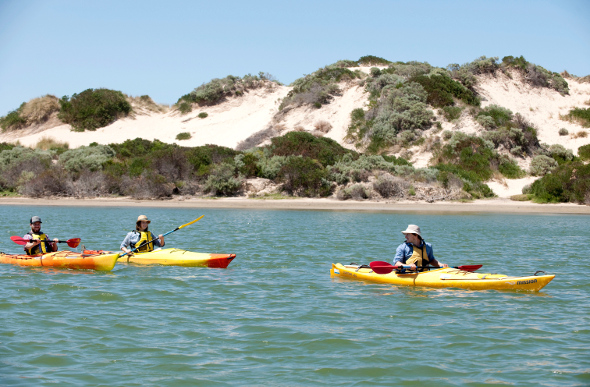 Kayak is the best means of transportation around the Coorong (Image: South Australia Tourism)

South Australia's Demons Of The Deep

And to boost the show, a fur seal surfaces right alongside the kayak with a fish flapping in its mouth. Brenton says everybody wants to catch a Coorong mulloway and a lot come in the hope of hooking the dream fish.

“There’s also plenty of of mullet, brim, flounder and flathead”, he says. 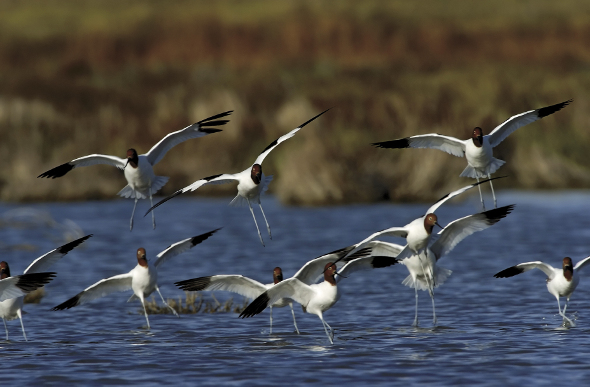 With kayaks beached half way through our day tour, Brenton leads a walk from the estuary across the sand dunes to the Southern Ocean.

Packed with local knowledge, he explains the close connection between the traditional owners, the Nurrungeri people, and their land. Ancient middens of shellfish flaked stone tools and burial sites (all to be left undisturbed) are scattered throughout the area.

We discover popular bush tucker including coastal wattle for wattle seed cake and ice-cream; the tasty, sweet white berry called beard heath for stews or eating by the handful; bower spinach, the salty, green, flat leaf, good for blanching and boiling; and muntries and sandphire for seasoning the Coorong fish burger.

Then, at the ocean shore, we twist barefooted to catch Coorong cockles before diving into the Great Southern Ocean. 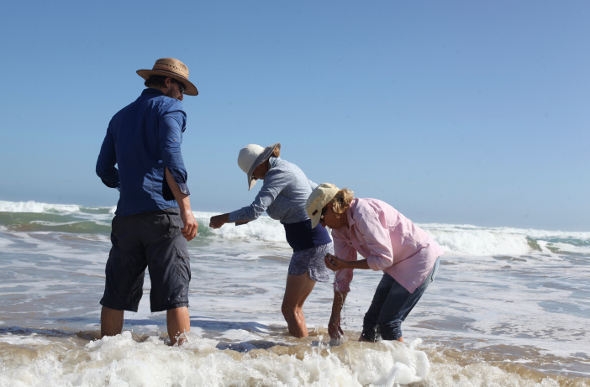 Hunting for Coorong cockles in the ocean (Image: Paula Heelan)

At an earlier stopover we devoured a picnic of South Australian fruit, cheese and amazing homemade biscuits (baked by Brenton’s nana). Later, sitting on the sand at the Murray mouth on sunset, Brenton pan-cooks mouth-watering Coorong mullet with bush seasoning.

Paddling back at the end of the day, the kayakers, stunned by the Coorong encounter, are quietly watching, listening and appreciating every last moment.

Visit your local Flight Centre store or call 131 600 for more advice and the latest deals on travelling to Adelaide.