Our ordeal started in Glasgow. We knew we had a tough weekend ahead, with a cold front sweeping in and the wilderness awaiting.

Outside Queen Street railway station, Kerry from Scotland Overland handed us the keys to our survival vehicle. There was a brief and efficient introduction to the equipment that was packed, with ruthless ergonomic logic, into the back of a Land Rover Defender. 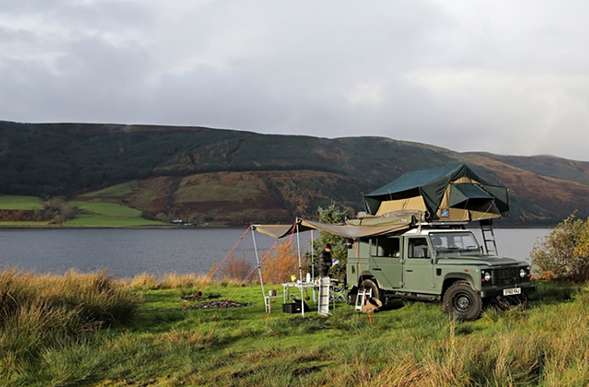 Kerry and her husband, Duncan, had done thousands of kilometres of expeditions in Africa to learn the best way to do this.

There were camp chairs and stools, a table with a cloth and three types of cooker. There was a trenching tool, a GPS and fleecy liners for the sleeping bags. We grinned at each other. This was going to be a doddle.

We asked Kerry to point out on the OS map all the wild camping spots within a few hours' drive. Scotland's accommodating laws make wild camping relatively straightforward, the spirit of all the rules being to tread lightly and leave no trace.

There were plenty of options: the Isles of Arran and Bute are accessible by ferry, and there was Loch Lomond and the Trossachs.

But our plan, quickly formulated, was to head west along the Clyde then take the ferry across to Dunoon on the Cowal peninsula, a swift way to reach the wilderness. 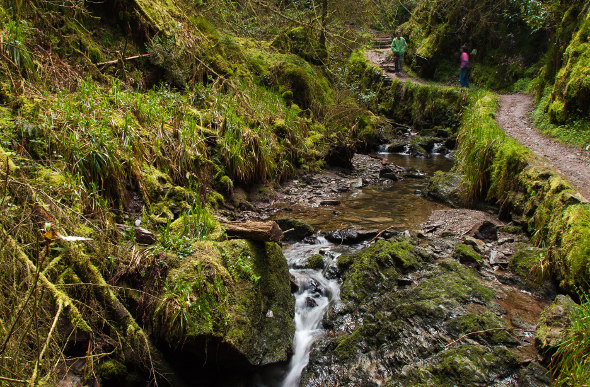 In the wilds of Cowal

Waitrose Is A Great Place To Forage

I'd told Peter, my companion for the weekend, that I wanted us to immerse ourselves in nature, red in tooth and claw, and survive on the bounty of the Caledonian forests and foreshore.

In my bag I had a collapsible lobster pot, some crab lines and a canvas bucket, plus several weighty books on mushrooms and wild edible plants.

"It's all we need," I told him as we drove off. "We'll have crabs galore, some fish, plus loads of mussels."

Peter nodded without enthusiasm. He is a man who loves nature no better than when it is elegantly recorded in a book. "We're foraging for everything?"

"We've got some milk and bread in the fridge to get started. After that we're on our own."

Silence. I drove, getting tangled in Glasgow's city centre. Eventually, somewhere along the Byres Road, Peter emerged from his reverie and spoke. "Stop the car. I want to forage."

Twenty minutes later he returned with three Waitrose bags and a sheepish grin: "It's called wild glamping. We can check the mushrooms in your bushcraft book, if you like, but I think they look fine."

My companion, it seemed, was a resourceful and talented survivalist. 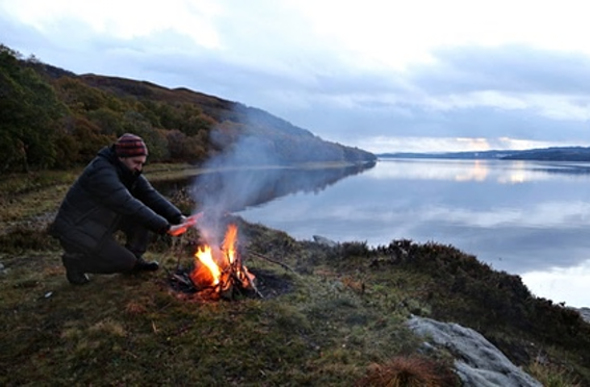 Reaching Gourock for the Dunoon ferry we crossed to the Cowal peninsula as the light began to fade. Conscious that it might be best to make our first attempt to raise the roof before darkness fell completely, we took a minor road to the wild shores of Loch Striven, and a grassy promontory Kerry had suggested.

Two hours later, Peter and I were almost ready to start enjoying our wild glamp. The roof tent was up, with mattresses, sleeping bags and pillows. The awning and dining table with chairs were constructed. The barbecue was glowing. The beers were chilling.

All this equipment, we were beginning to realise, takes a lot of time to handle.

I did a survival training course in Scotland 10 years ago with just a bivvy sheet and a folding knife. We'd had to build a shelter to sleep in, get a roaring log fire going against the cold and find something to eat. I'd say all that took two or three hours too, although there were no venison sausages at the end, and the mushrooms came with the possibility of renal failure.

Back in the realm of luxury survivalism, our only problem was with the petrol stove. I fiddled with it for a few minutes. "No, definitely broken – have to use plain old fire."

Peter looked doubtful. "All the equipment is new. I can't see how …"

I slapped the frying pan, filled with venison and steak, on to the log fire. He did not object.

Next morning I checked the lobster pot and crab lines. Nothing. Peter triumphantly produced organic oats, a loaf of bread and some eggs. The little emergency gas stove managed all this, but by the time we had cooked, eaten and broken camp, it was lunchtime. 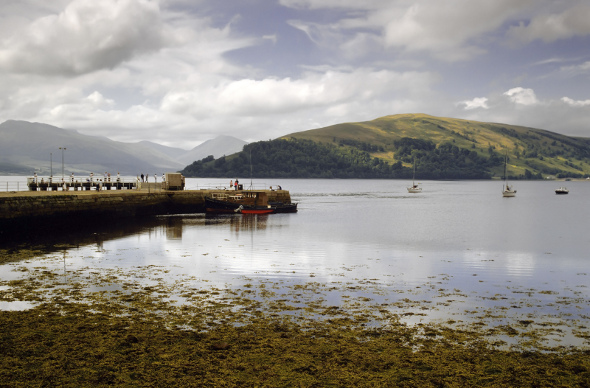 The barren (to us) shores of Loch Fyne

In the spirit of adventure, however, we pressed on into the wilderness, driving through misty forests to the shores of Loch Fyne. This was where, a decade before, my newly acquired survival skills had been put to the test.

Driving along the narrow single track road, I spotted the exact location where I had lived for what seemed like a year, but was actually three days.

Nature Settles In Over A Freezing Cold Loch

With some manoeuvring, we inserted the Land Rover into the same spot between some birch trees. "Now you'll see what real foraged food tastes like," I said to Peter, who had been in favour of pressing on to Inverary. "None of your supermarket rubbish!"

That afternoon, for a couple of hours, it was an idyllically clear blue day. Away to the east, beyond the head of the loch, a mountain white with snow was dotted with skiers. 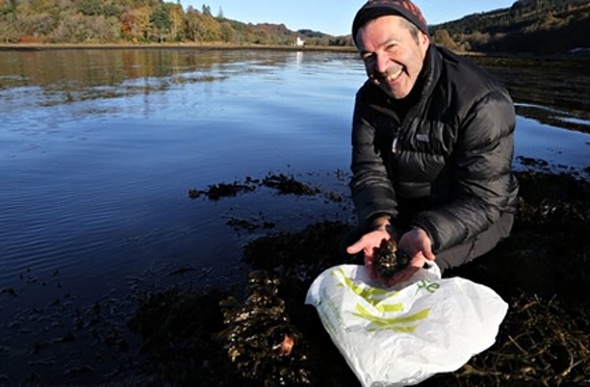 Fish out of water ... Peter with foraged crab (but Waitrose provided dinner) PR

To the west, banks of mist were rolling off the russet-coloured hills on to the loch. The temperature was dropping with alarming rapidity, but that didn't seem to worry Peter, who was feverishly jotting down notes and calling up snatches of poetry. It was, admittedly, a moment filled with the sublime beauties of nature as she straddled the loch with her golden limbs and draped herself in wispy bits.

"We need to get foraging," I insisted. "The tide's coming in. We'll never get any mussels."

But Peter was lost, wandering lonely up the shingle foreshore while spouting clouds of fine words: "I think it was Robert Macfarlane who said …"

I turned away, muttering something uncharitable about spit-roasting nature writers, all the while lifting boulders to hunt for fish and scouring everywhere for mussels and other edible creatures.

It was freezing cold now and I slipped on the rocks, slopping seawater down my boots. An hour later, when the tide was in, I returned. I had one small greenish crab in my bucket. It was getting dark. My hands, feet and nose were numb with cold. 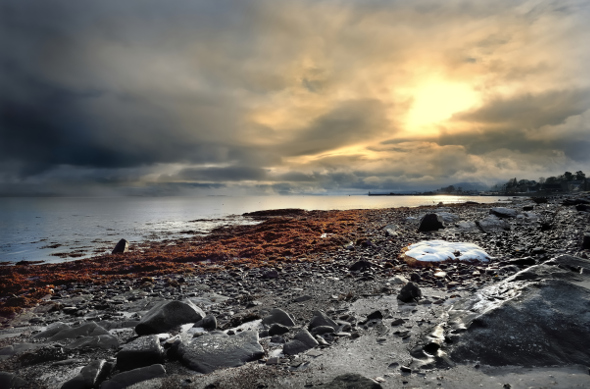 A storm gathers over Loch Fyne

Peter was opening a bottle of wine by a crackling fire, a book open on his knee and a steaming mug of tea on a handy stump. He had figured out how to operate the petrol stove. "Boils water in seconds. Want a cuppa?" A packet of HobNobs appeared. "One of these before you tuck into your crab?"

I went back to the shore and gently returned the poor creature to the water. As I straightened up, the moon came sailing out from the dark mists and hammered the loch into silver pewter. Behind me I could hear the welcome sizzle as Peter slung a couple of steaks into the frying pan. Wild glamping, I decided, had won me over.

This article was written by Kevin Rushby from The Guardian and was legally licensed through the NewsCred publisher network.

Kevin Rushby is Guardian Travel's 'Explorer' and a contributor to the Saturday Review. He is the author of four acclaimed travel books, including Hunting Pirate Heaven, an investigation of 17th century pirate utopias in the Indian Ocean. His most recent book is Paradise, an historical account of human searching for perfection over the centuries.
more articles from this author