Wining And Dining In Vanuatu

Wining And Dining In Vanuatu

Slow cooked fruit bat, anyone? Or how about a coconut cream kava cocktail?

I was expecting a lot of things out of my Vanuatu holiday, but I wasn’t expecting the surprisingly good (and quirky) food scene in Port Vila. You could stay here for a month and never eat at the same place twice – unless you wanted to. And in some restaurants you’d definitely want to. 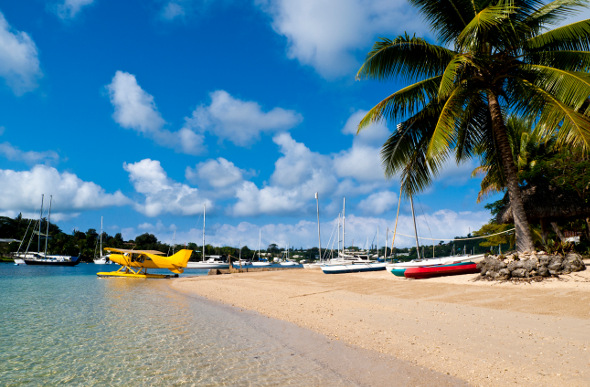 Sunny shores and fantastic dining are par for the course in Vanuatu! (Image: Getty)

Its reputation had preceded so we headed straight to L’Houstalet on our first night. Clement Martinez is the eccentric French man who opened his doors in 1969, and while his restaurant has a reputation for fruit bats, he does have an extensive menu of more traditional, Pacific influenced, French cuisine.

L’Houstelet is off the beaten track for tourists striding along the newly redesigned Port Vila waterfront edged in hotels, restaurants and bars, but is well known by locals and taxi drivers. It should definitely be on your menu.

For those with an adventurous palate, his fruit bat is served in a rich sauce after marinating for hours in red wine and secret ingredients. It is surprisingly good. “It tastes like hare,” Clement said helpfully, when I asked what it was like. Not having eaten hare, I was none the wiser, but with round eyes of surprise, I enjoyed it.

Why The South Pacific Is A Must For Families 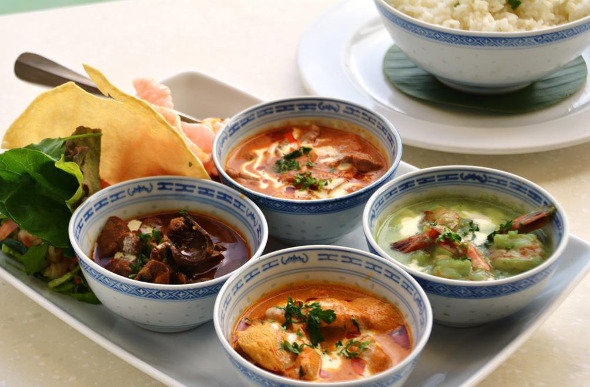 Curry nights on the beach are reason enough to get to the Grand Hotel (Image: grandvanuatu.com)

On Friday nights, the Grand Hotel on the water’s edge has curry nights. The chef is from Nepal and cooks up his traditional family recipes to transport his diners to his home land via little bowls of deliciousness that you can order as a sample platter of five curries or just scoop one on your own.

For a lazy sunset drink with your toes in the sand, the Banyan Tree Bar is just a short wander from The Grand and serves cocktails in jars around a bonfire. Or if you’re here early enough, grab the cabana and lie back with a glass to toast the end of another day in paradise.

Santo beef has a world-class reputation from the neighbouring island of Espirito Santo and is dished up in many restaurants around Vanuatu.  Mangoes Resort restaurant, which serves guests in both Mangoes Resort and the modern Terraces Boutique Apartments next door, is about one-kilometre from the main street of Port Vila. We stayed here and dined more than once on their juicy, tender Santo beef served medium-rare on a bed of sweet potato mash and drizzled in a red wine jus – which I wrote home about. 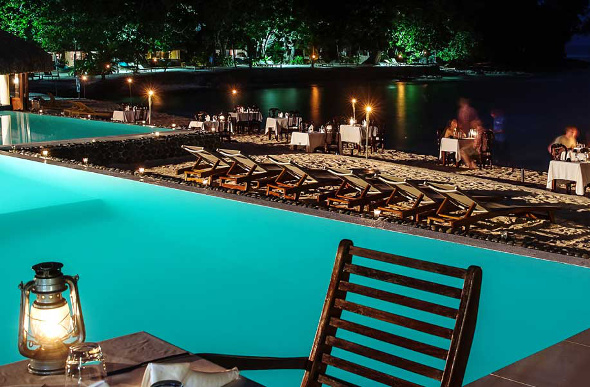 For the most eye-popping seafood platter I’ve ever seen, have dinner at Breakas Resort. The restaurant opens onto the pool, looking beyond to white sand and gentle lapping waves. This platter is suggested for two, but it might still beat you. It comes with pretty much everything you can imagine from the sea: a lobster tail, giant crab legs, a conch shell filled with shrimp and mussel mornay, prawns on skewers, scallops, poke salad in a tiny bowl and deep fried fish bites. And all of this stacked so high you can barely see the waiter’s face as he brings it to the table.

Finish the evening back in town at the Lava Lounge, a chilled low lit bar that from the outside looks like a nondescript shed opening onto the dock. By night the dock is all blue lights reflecting onto the water, with groovy beats drifting on the air as couples and friends sit on couches around the U-shaped marina telling tales. Cocktails are shaken and poured in all shapes and colours, but it was the kava cocktail made with ground kava root powder and coconut cream sprinkled with shaved chocolate that had me coming back for another.

Vanuatu is back and more restaurants and bars than ever are open and ready to surprise and delight her visitors.

Megan Singleton is a huge fan of travelling and can’t wait for her next trip. She is a freelance travel writer and editor based in Auckland.
more articles from this author