The World's Weirdest Animals And Where To See Them

The World's Weirdest Animals And Where To See Them

As a bright green worm-like creature is filmed in Taiwan, we look at other bizarre members of the animal kingdom, and show you where to find them. Here you'll come across the bizarre, the highly unlikely, the quite disgusting and the downright weird denizens of Mother Nature's realm.

A man encountered this green jelly-like ribbon worm, or Nemertea, while fishing in the port of Penghu in Taiwan. It has a proboscis, or feeding tube – a pink ribbon – that it ejects while hunting.

They are also undoubtedly disgusting.

Taiwan (and elsewhere): Should you wish to, ribbon works can usually be seen underwater in tropical regions, but are also known to inhabit cool, damp terrestrial areas.

You've heard of eyes bigger than your stomach – well, now meet the animal that has eyes as big as its brain. 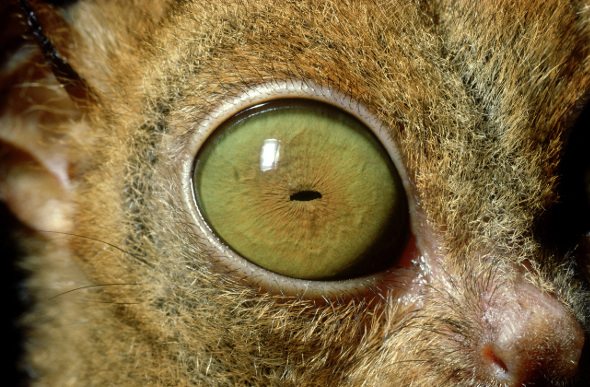 It's all eyes (images: Getty)

The Gollum-like western tarsier has possibly nature's best night vision goggles, while it uses its claw-like digits and powerful back legs to leap between trees in search of insects and small invertebrates, and to claw them out from nooks and crannies in branches.

The tarsier is native to Borneo and parts of Sumatra. It can also be seen in The Philippines.

This deep sea fish has fangs so large that they protrude from its mouth, sitting like spears alongside its beady eyes. Lurking at between 1,000 and 2,000 metres below the surface of the ocean, the viperfish uses bioluminescence to create a small lamp that dangles from its back to attract its prey of crustaceans and small fish.

Although viperfish have been known to get caught up in deep sea trawlers' nets, it is unlikely that you will ever see a living specimen. However, they may be spotted at Iceland's annual Festival of the Sea (Sjomannadagur) at Reykjavik harbour, at which fishermen display a variety of strange, deep-sea species, including sea lampreys, fangtooths and viperfish. 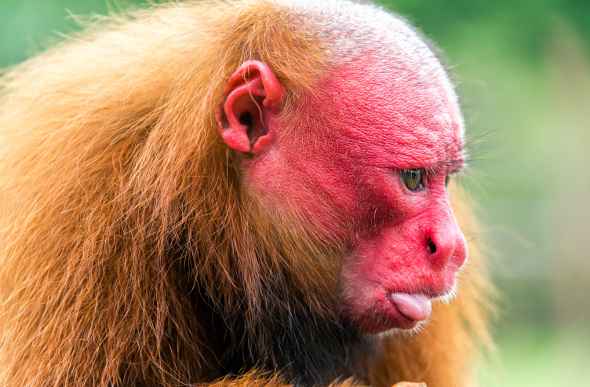 Whether or not that's myth or reality, the bald ukari's scarlet pate does ressemble that of a holidaymaker who has fallen asleep in the sun. During the rainy season, this vulnerable species lives high in the tree tops of the Amazon river basin, but retreats closer to the ground in the dry season to forage for nuts and seeds.

The bald uakari can be found deep in the forests of Brazil, Peru and Colombia. In his guide to visiting the Amazon rainforest, Chris Moss recommends the floating Uakari Lodge, in Brazil's remote Mamiraua Sustainable Development Reserve, where guests may see bald uakari alongside other animals such as three-toed sloths and pink river dolphins.

It may look like a pile of rotting leaf mould, but this is actually a freshwater turtle. Its protruding nose acts as a snorkel, and it uses its mouth as a low-pressure vacuum to suck fish inside when they approach.

Its carapace can measure up to 45 centimetres, and when fully grown they can weigh up to 15 kilograms.

The mata mata can be found across South America, notably in slow-moving streams and pools in northern Bolivia, eastern Peru, Ecuador, eastern Colombia, Venezuela, the Guianas, and northern and central Brazil.

Inhabiting the arid Namib desert, the fog-basking beetle captures water droplets on its back legs from coastal fog by performing a headstand in the sand.

This spiny mammal bristles with barbed quills that it uses to ward of predators - mostly mongoose - by erecting them, pointing them forward, and driving them into the attacker's nose or paws. 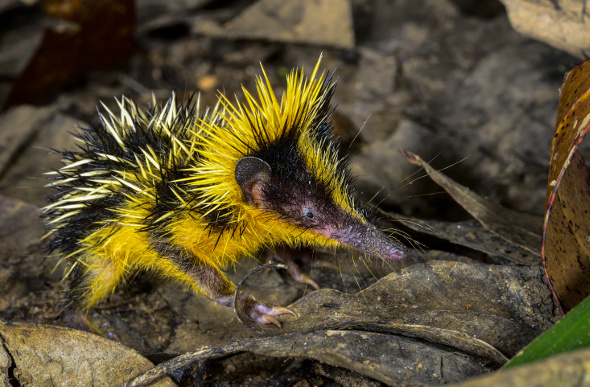 The bristles are a warning

In bold yellow and brown stripes, the tenrec weighs about 200 grams and feeds on earthworms and insects.

Northern and eastern Madagascar, where it can mostly be found in long, shallow burrows, in family groups.

The Lazarus of the animal world, this salamander has fascinating healing powers, with an ability to regrow limbs, parts of its brain and spinal chord. Its feathery gills and lidless eyes are explained by the fact that it remains in larval stage throughout its life. It is often mistaken for a fish, but is actually an amphibian.

The Mexican axolotl is critically endangered and in the wild can only be found in Lake Xochimilco, near Mexico City.

The babirusa's tusks have inspired masks among the islanders who share the pig-deer's habitat, and have been known to be presented as gifts to visitors. 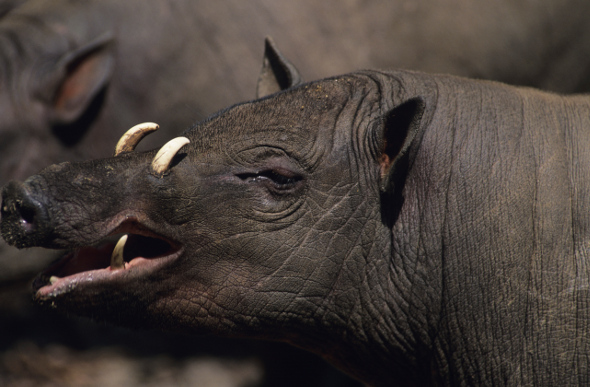 The tusks are highly prized

The animal is protected in Indonesia and poaching is illegal, but they are still threatened by hunters, as well as deforestation.

The babirusa can be found in the Adudu Nantu and Tangkoko nature reserve in North Sulawesi, Indonesia.

The Malay for this primate is orang belanda, or 'Dutchman' – supposedly because its pot belly and large nose reminded locals of Borneo's first European settlers. Writing about a trip to Borneo for Telegraph Travel in 2009, Frank Gardner described seeing "a female with her baby clinging to the soft fur of her underbelly as she leapt and swung through the trees".

The monkey weighs up to 23 kilograms and will only eat unripe fruit – the sugars in softer fruits ferment in their stomachs, which can cause fatal bloating.

The proboscis monkey is indigenous to Borneo and is usually found in coastal areas.

These insects are masters at the art of camouflage, using their horn-like protrusions to resemble dead leaves in the presence of predators. 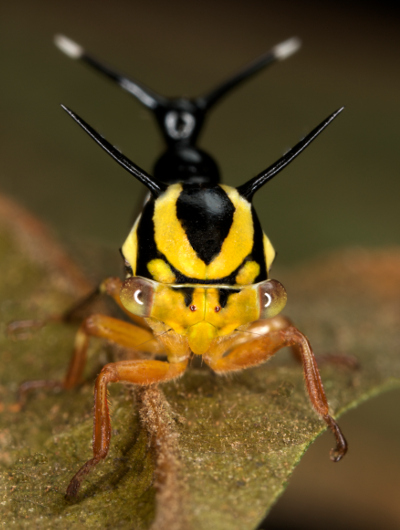 Their powerful hind legs allow them to scarper if their ruse is rumbled. There are over 3,200 species, but individuals can only expect to live for a few months.

Treehoppers are found on every continent except Antarctica.

Woods, parks and gardens across much of Europe and Asia (including Britain).

Also known as Temminck's pangolin or the Cape pangolin, the ground pangolin is the world's only warm-blooded creature that is completely covered in scales. 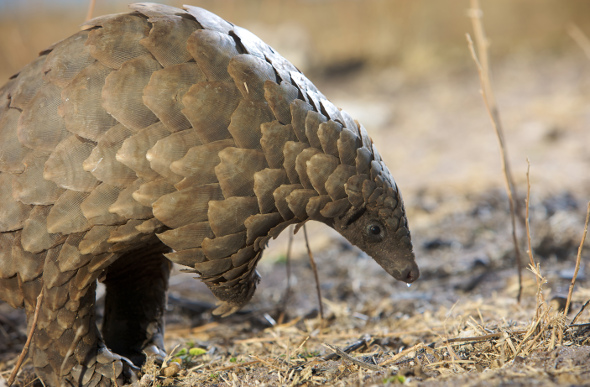 Across sub-Saharan Africa, perhaps in Botswana's Kwando Reserve and Okavango Delta – but as pangolins are one of the world' most critically endangered species, sightings are rare.

This amphibian lurks on the forest floor, but its scaly skin camouflages it against the surrounding foliage, enabling it to swallow its prey – crabs, lizards, small rodents and other frogs – whole as soon as they come within reach.

The upland forests of South-East Asia, including the nature reserves of Sabah, southern Thailand and Peninsular Malaysia. They are, however, extremely difficult to spot and amphibian lovers travelling east to see them should not be disappointed if they do not emerge.

This large African bird – also known as the whalehead or shoe-billed stork – has an unfortunate beak – perhaps 10 centimetres wide and 23 centimetres long. 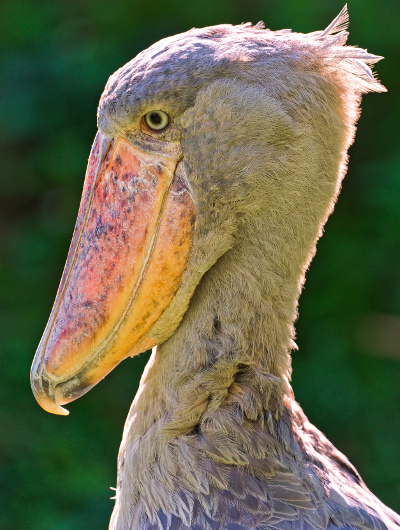 Its feet are outsize too

It also has exceptionally large feet, with the middle toe reaching 16.8 to 18.5 centimetres in length.

The wetlands of the Great Bangweulu Basin in Zambia.

Lizzie Porter is a Content Editor on Telegraph Travel. Her favourite destinations are the Middle East and France, and top of her "to-do" list is diving in French Polynesia. Her interests are varied, going from hiking and coasteering to advising on travel fashion and beauty. You can follow her on Twitter: @lcmporter.
more articles from this author