Marseille Travel Tips: Where To Go And What To See In 48 Hours

Marseille Travel Tips: Where To Go And What To See In 48 Hours

France's biggest port city has a direct rail connection from the UK thanks to Eurostar's new direct service from London. And as the Provençal capital warms up and life moves outdoors, it is getting prepared for an onslaught of spring and summer festivals.

Marseille airport is 25 kilometres north of the city and is served by Ryanair (from Edinburgh), easyJet (from Bristol and Manchester)and British Airways (from London).

Marseille's centre sprawls around the Vieux Port, from where boats go to the Frioul islands, including the forbidding Chateau d'If fortress. To the north of the port, ancient and modern bump up against each other as the hilly streets of Le Panier, the oldest district, meet the revitalised Joliette Docks.

West of the port is the vibrant Cours Julien, with its hip bars, vintage shops and a large Wednesday market. There's a mishmash of centuries in the streets south of the port, ranging from the 12th-century Abbaye Saint-Victor to 18th- and 19th-century townhouses. 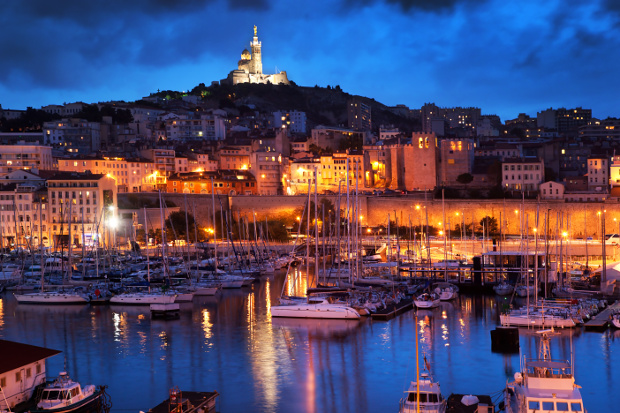 The city is easily navigable on foot, but the public transport system is straightforward and efficient. Single tickets on the RTM, which includes the metro, trams and buses, cost €1.50 ($2.19 AUD) and last an hour. You can buy travel cards for 24 hours and 72 hours.

The main Office de Tourisme is at 11 La Canebière near the Vieux Port,with another at Saint-Charles station.

Last year, architect couple Claire Fatosme and Christian Lefèvre opened Marseille's latest five-star hotel and spa. The C2 Hotel occupies a 19th-century townhouse at 48 rue Roux de Brignoles. Rooms are simple without being cold, with a well-equipped spa and a private beach accessed by boat in summer. Doubles from €219 ($319 AUD), room only.

An old printworks has been transformed into a stylish B&B with a rare bonus of a courtyard garden pool. Casa Honoré at 123 rue Sainte borrows heavily from the 1950s and 1970s in its airy interiors, with all rooms overlooking the garden. Doubles from €150 ($218.50 AUD), including breakfast.

If you've just stepped off the Eurostar and don't want to go too far, check out the new Alex Hotel at 13-15 Places des Marseillaises, a sleek little three-star near the station that opened in December. Doubles from €98 ($142.75 AUD), room only.

Start from under the Ombrière, Norman Foster's huge mirrored sunshade at the western end of the Vieux Port. In the morning, you can soak up the fish market's buzzing atmosphere. Bear right, along the quay, past the many seafood restaurants until you reach a wide stone staircase on the right before the road bends.

At the top, cross the footbridge to the immense 17th-century Fort Saint-Jean, now surrounded by gardens with sweeping vistas of the port. From here, carry on over a second footbridge to the Musée des Civilisations de l'Europe et de la Méditerranée or along the Quai de la Tourette to the Joliette Docks. Here, old warehouses and even the former vaults of the Cathédrale de la Major have been turned into restaurants and shops.

Lunch on the run

At the top of La Canebière, the long boulevard that stretches west of the port, try one of Marseille's tastiest seafood experiences. La Boîte à Sardine at 2 Boulevard de la Libération is an enjoyably chaotic little restaurant and fishmonger that's open only at lunchtime. It has incredibly fresh fish and serves more obscure creatures such as sea urchins and sea anemones. The mackerel is sublime.

Check out the graffiti-covered streets of Cours Julien, especially rue Pastoret, for one-off fashion boutiques such as Complex Marseille at No 3 and funky little shops such as l'Entrepot at No 13 and Dans tes Rêves at No 1 selling pseudo-vintage homewares. In contrast to scruffy Cours Julien, the new Jardin Montgrand concept store at 35 rue Montgrand  is a chic outlet for designers. You can refuel in the Arty Café.

Take a glass of wine at Bar de la Relève at 41 rue d'Endoume in the Saint-Victor district, a haunt of the bobo crowd. In Cours Julien, grab a seat and a €2.80 ($4 AUD) beer in Oogie at No 55, which has DJ nights on Thursdays and Fridays. 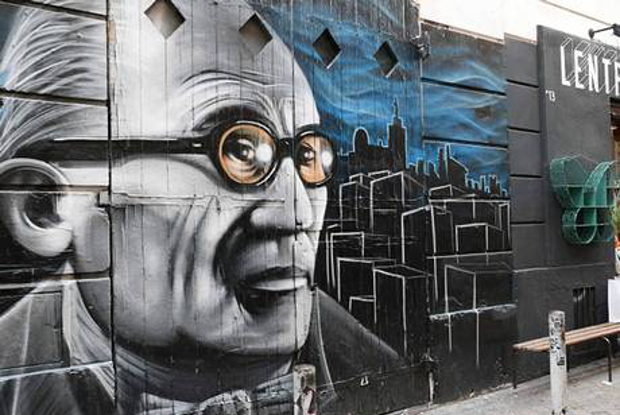 Dining with the locals

After running Bordeaux's Michelin-starred Le Saint James, Michel Portos returned to his home city to set up Le Malthazar at 19 rue Fortia. The menu changes but could include squid fricassée or cod fillet in buttery, curry sauce.

Book ahead for a table in the delightful courtyard of La Cantinetta at 24 Cours Julien. It has some of the best Italian food in Marseille, including generous portions of linguine alle vongole.

The 19th-century Cathédrale de la Major, with its striped neo-Byzantine towers, looms over the Joliette Docks. Its vast interior is relatively restrained, dwarfing visitors with its vaulted ceilings.

There's a menu from a new country every Sunday at Longchamp Palace, 22 Boulevard Longchamp. For €18 ($26.22 AUD), you get a hot drink, a smoothie and the chance to raid the generous buffet. It runs from 11am until 3pm, but you can't book ahead.

A five-minute walk west of the Longchamp Palace restaurant is Parc Longchamp, seven hectares of elaborate 19th-century gardens. You can't miss the entrance: the enormous ornate columns of the Palais Longchamp monument. 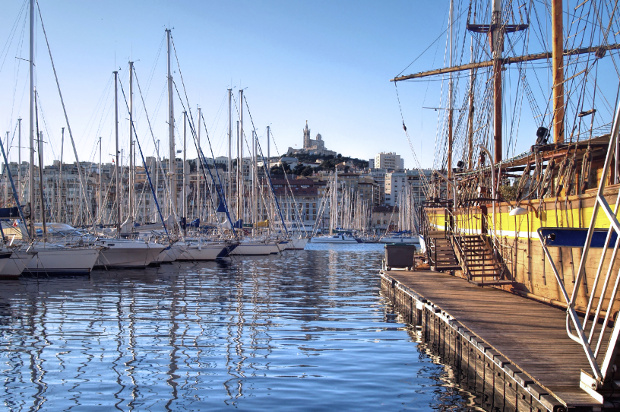 Built for Marseille's 2013 stint as European Capital of Culture, MuCEM celebrates Mediterranean cultures in its permanent and temporary exhibitions. The latest focuses on contemporary Tunisia (12 May-28 September, 11am to 7pm, closed Tuesday).

The icing on the cake

Marseille's emblem and protector is the 1864 basilica of Notre Dame de la Garde. It stands at the city's highest point. 'La Bonne Mère', to use its nickname, glitters in the most opulent neo-Byzantine style, and is topped with a Virgin Mary statue in dazzling gold.

This article was written by Mary Novakovich from The Independent and was legally licensed through the NewsCred publisher network.