It’s the best airline in the world - and that’s official.

Qatar’s national carrier, Qatar Airways was named ‘Airline of the Year’ in 2017, an award that it has received consecutively - aside from briefly being knocked off the pedestal in 2016 by fellow Middle Eastern carrier, Emirates - for four years. On top of this accolade, Qatar also took the top gongs for World's Best Business Class and World's Best First Class Airline Lounge. So it’s fair to say that this Qatar Airways reviewer arrives for his flight with expectations that are sky high. But does the actual experience live up to the hype?

Baggage Allowance: check-in 2 bags each not to exceed 32kg, carry-on 2 bags with a combined maximum weight of 15kg

Checking in at the designated Business Class counter was a real time-saver. Hassle-free, my bags were checked in and my boarding pass printed in a few minutes. Then, armed with an ‘Express Path’ pass for clearing security, I was in departures spritzing myself with duty free aftershave in under 10 minutes, allowing for my time in the lounge. 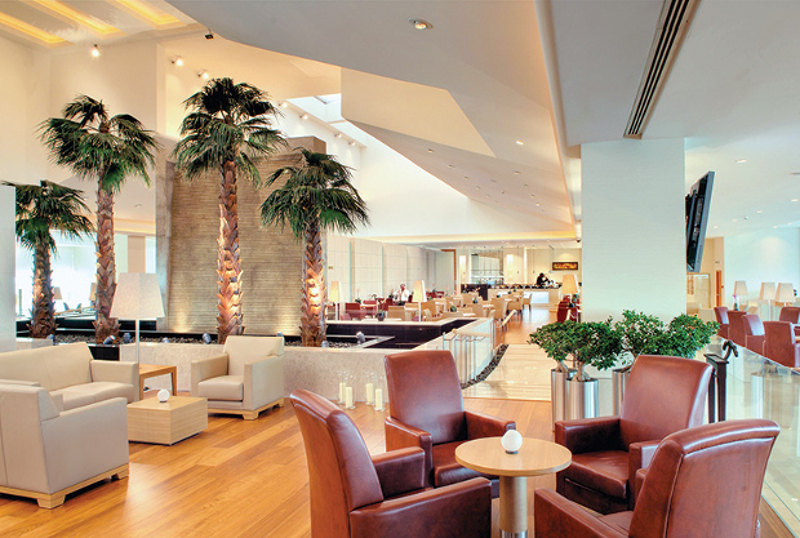 In Sydney, Qatar use the Qantas Business Class lounge, which is pretty lacklustre, especially when it comes to their food and drink offering. Thankfully, I wanted to save myself for dinner onboard.

However, the Al Mourjan Business Lounge in Doha airport is something very special. Easily bigger than some actual airports, the multi-level, sprawling lounge is all sleek, polished marble floors and contemporary fittings. Boasting seating for up to 1,000 guests, there are conference rooms, private workstations, two restaurants - offering both self-serve buffets and a la carte options - and two bars where you can pull up for a cocktail or two. Downstairs there are multiple shower suites to freshen up in too. 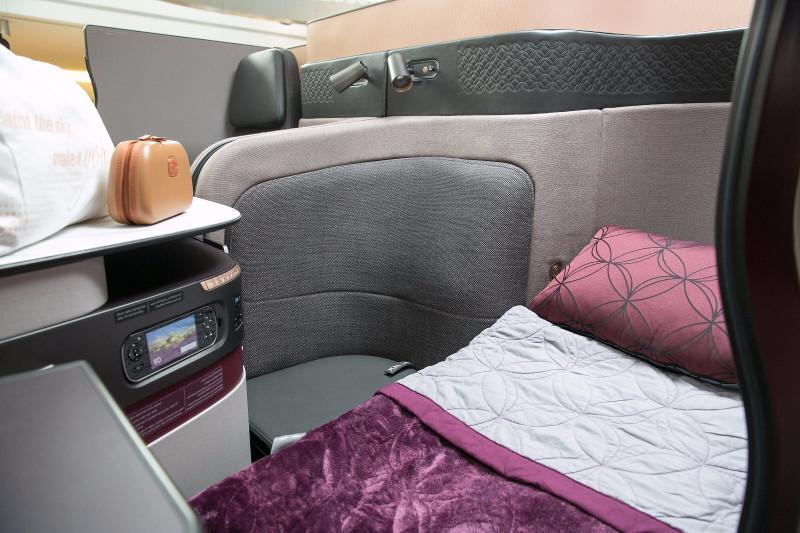 Business class is nestled on the upper deck of Qatar’s Airbus A380s, with seats in a 1-2-1 configuration which happily means that all have direct aisle access.

The seat itself is great - comfortable and with ample storage space (window seats like mine also have deep bins under the windows). Considering I was on a night flight, getting horizontal for a few hours of shut-eye was at the forefront of my mind. Pre-programmed buttons convert the seat to a flat bed that’s 22-inches wide and 80-inches long. Crew will also install a fitted mattress, which - when paired with a comfy duvet and pillow - makes for a great slumber.

But there’s more to business class on the A380 than just the seat. In the plush onboard bar and lounge (yep, an actual bar in the sky) you can socialise on one of the leather sofas flanking either side of a long bar, laid out with champagne on ice, fresh flowers and yummy canapes. Talk about decadence. 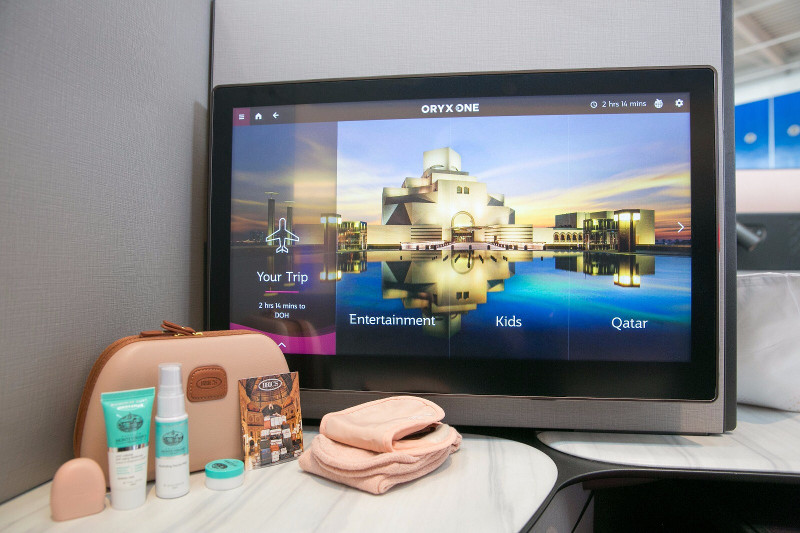 A fold-out, very generously sized, adjustable touch, 17-inch HD TV screen ensures that - whether you’re watching a recently released blockbuster or catching up on a small screen series - you won’t miss any of the detail. The touch screen is also paired with a traditional remote, which I used in tandem, alongside noise cancelling headphones.

The Oryx One Inflight Entertainment is loaded with a whopping 500 movies (from new Hollywood releases to classics), including lots of TV, documentary and audio options. Inflight WiFi is also available with the first 15 minutes provided per device at no charge.

Pleasant, efficient and attentive - service onboard was smooth and quick with my needs constantly anticipated.

A glass of bubbly, water, or Qatar’s signature lemon and mint refresher, was offered minutes after I took my seat, along with a variety of Australian and international newspapers, swiftly followed by a refreshing hot towel (one precursor to take off that I always look forward to!).

A smiling attendant took me through the seat before offering me lovely pyjamas, slippers and an amenity kit stuffed with luxe cosmetics from Italian skincare brand Castello Monte Vibiano Vecchio, including moisturiser, facial mist and lip balm. As an added bonus I was given extra boxes of the decadent Belgian Godiva chocolates throughout the flight after my stewardess realised that she had a hardcore chocaholic on her hands. 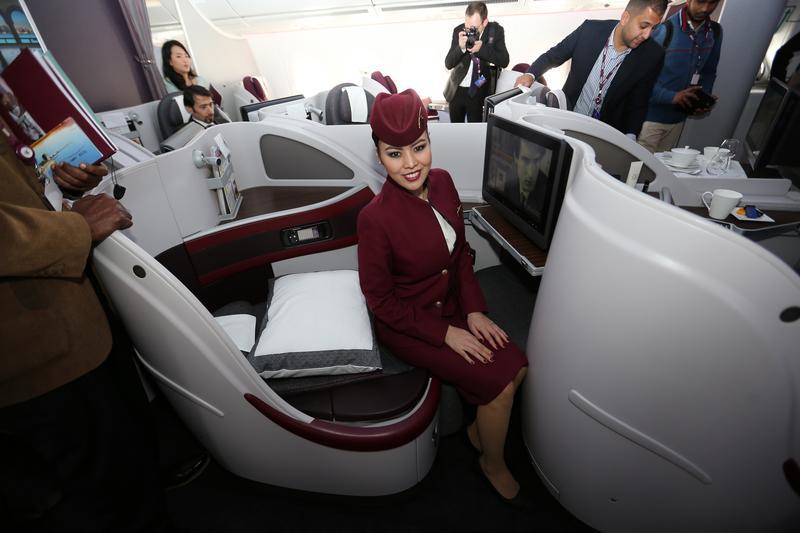 Speaking of…one of the real highlights of a Qatar business class flight is the food. Here, the trolley is a thing of the past thanks to the airline’s ‘dine anytime’ approach whereby you can eat whenever (and whatever) you like, whether that’s breakfast at dinner time, or dinner when everyone else is snoozing.

Adopting a ‘when in Rome’ mentality, I opt for the arabic mezze with its tasty selection of hummus, tabouleh and flatbread; followed by the arabic spiced chicken breast with cinnamon sauce. I clean both plates.

After sleeping for a good six hours or so, I awake feeling peckish and decide to order a midnight snack of seared fillet of beef brioche sandwich. Again, it’s demolished in no time. An hour or so before our early morning arrival into Doha, for breakfast I pick the healthy option of celery and cucumber healthy energiser, plus a portion of bircher muesli.

A sleek cabin, lots of room, amazing food and great, preemptive service - from check-in to arrival, Qatar Airways comes out on top.

Official acclaim aside, it’s unsurprising that this is one of the most rapidly expanding airlines in the world and Aussies are well serviced with daily flights from Sydney, Melbourne, Perth (and Canberra coming soon) and five flights weekly from Adelaide. From its Doha hub there’s a global network of 150-plus destinations, including plans to add another 26 destinations to their route before the end of 2018, so flying Qatar means that the world really is your oyster.

Tokyo 2020 Olympics: What To Watch & What To Eat
16 July 2021
Yes, the 2020 Olympics are finally here! We’ve put together a snapshot of the Aussie games you’re going to want to tune into, what Japanese dish you
Read Time: 3.3 mins