The Best Hotels Near Central Park

The Best Hotels Near Central Park

An insider's guide to the top places to stay near Central Park, including the best for panoramic park views, trendy cocktail bars and buzzing restaurants, in locations near Midtown, Fifth Avenue, Museum Mile, Madison Avenue, Carnegie Hall and Broadway. 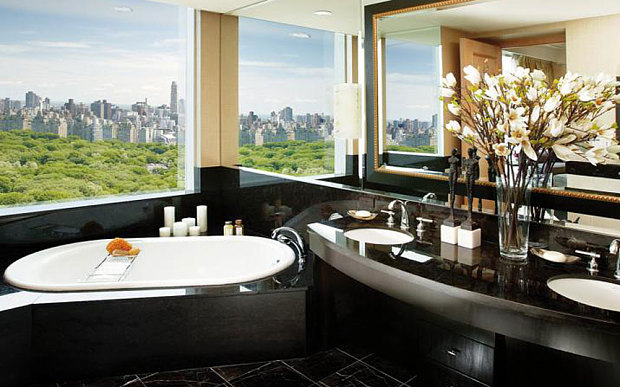 Set on floors 35 to 54 of the north tower of the Time Warner Center, with spectacular views of Central Park below, this is the ultimate in modern New York luxury. Décor-wise, Asian accents merge with retro elements. City View rooms looking out on the Manhattan skyline from the 38th and 39th floors come with Asian cherry wood furnishings, marble bathrooms, Fili D’Oro linens and floor-to-ceiling windows. Still, we prefer the Central Park View rooms done in subtle beige and cream tones, Asian art on the walls, and views of the sunrise over the park from the king-sized bed when you wake up. 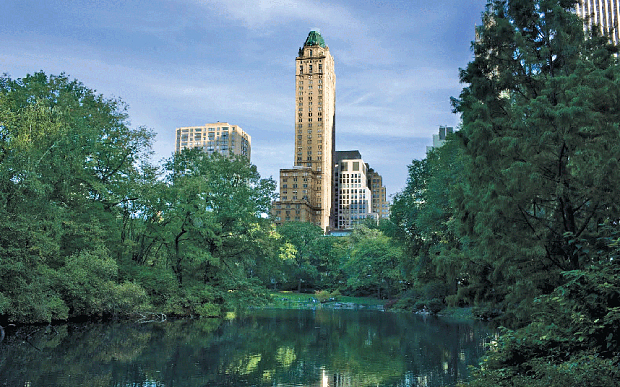 The Pierre, A Taj Hotel

Built in 1930, this beloved 41-storey Art Deco hotel overlooking Central Park (at Fifth and 61st) is the ultimate in understated luxury. It was the first hotel to offer radios and televisions in its guest rooms, in 1950. Bought by India’s Taj Group in 2005, a $100 million renovation in 2009 kept elements of the hotel’s old New York charm — wood-panelled lifts manned by uniformed operators; vintage mail chutes on each floor — but spruced up the rooms, interiors and lobby. 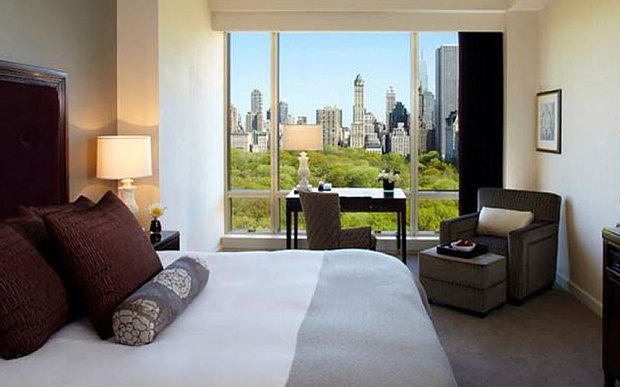 This 52-storey, 172-room luxury tower on the south-west corner of Central Park opposite the Time Warner Center has the impeccable star-studded Jean Georges restaurant at its base. The imperious chandelier-hung marble lobby is a perfect melding of Manhattan glitz and European grandeur. Dramatic Central Park views and high ceilings aside, the hotel’s 176 rooms and suites feature numerous modish amenities such as 55-inch televisions, Blu-ray players, iPod docking stations and Blue Lounge The Sanctuary charging boxes for all electronics. Opt for the two-bedroom suites which have the best Central Park views.

This Art Deco icon, its name sentinel on the rooftop, dominates Central Park South. Dating back to 1931, its architectural stylings — ornate gilded doors, rich wood panelling, that vintage rooftop sign — recall the glorious era, while all the modern interiors and cutting-edge technology associated with Marriott (who assumed management in 2012) bring it up to date. What it may lack in the glitz and glamour of other nearby addresses, it makes up for in excellent service and spectacular views. The dramatic setting is matched by a beautifully understated lobby of marble floors and dark wood panelling inlaid with photographs of Central Park scenes that add colour. 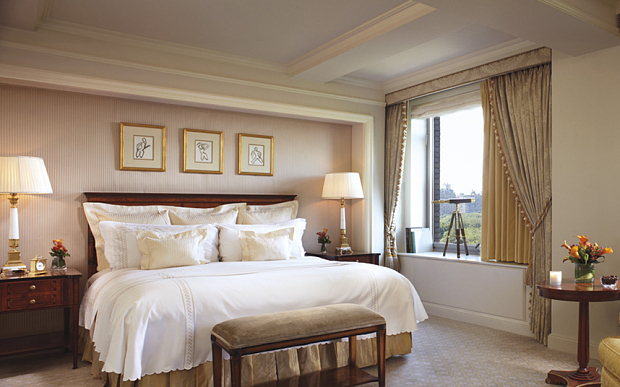 Set over 33 floors of an historic 19th-century building, it’s like stepping back in time at this elegant 259-room oasis: the horse carriages, doormen and the pink marble-lined lobby with antique furnishings is fit for royalty. On the south side of Central Park — the quiet end of Midtown — Manhattan’s great green garden is pretty much your front lawn. Horse carriages out front can take you through the Park, but you’re also only a walk away from Fifth Avenue department stores, Carnegie Hall, Time Warner Center and all of Broadway. I loved the new in-room signature scent, Central Park, created exclusively for the hotel by L'arganique Beauté. 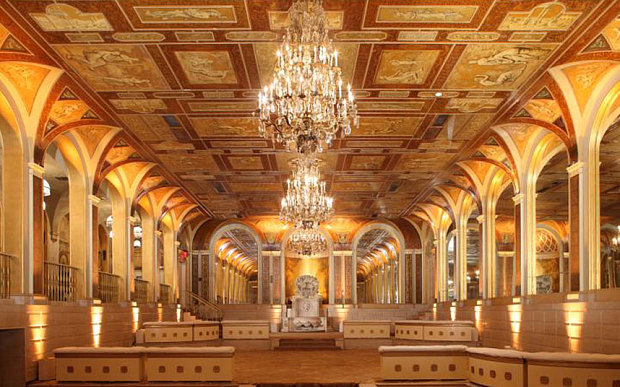 Imperiously situated on Grand Army Plaza at the south-east corner of Central Park and Fifth Avenue, this is prime Manhattan real estate. You not only have the park as your playground but you’re a walk away from all the Midtown action, as well as Museum Mile and Madison Avenue boutiques. There are no less than 282 rooms in 14 styles ranging from Signatures and Deluxes to sprawling Legacy Suites named for New Yorkers such as Vanderbilt and Carnegie. The suites (102 of them) are vast as Upper East Side townhouses, with separate living areas and even butler’s pantries. Opt for a Central Park view.

On the corner of Fifth and 59th at the entrance to Central Park, and steps away from both Madison Avenue and Fifth Avenue shopping, the location simply can’t be beaten. The Sherry-Netherland was built in 1927 as the tallest residential hotel in New York, but in 1954 it became a cooperative building. Which means all the hotel rooms and suites are individually owned, some by famous influencers — the better for snooping through the medicine cabinets — and decorated to the owner’s personal style, giving the whole place a lived-in, home-y feel. 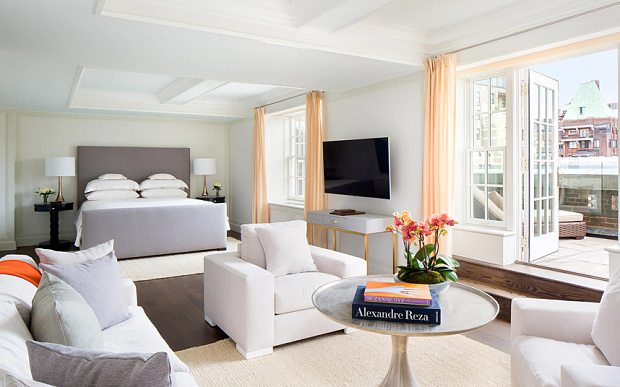 On a tree-lined block at Madison and 77th, one block from Central Park and within Museum Mile. You can enjoy the ultimate picnic in the park with a ‘lunch-to-go’ created by celeb chef Jean-Georges Vongerichte, who heads up the French-American Mark Restaurant & Bar, a happening spot drawing tycoons, Park Avenue heiresses and staff from nearby galleries and auction houses. French designer Jacques Grange’s bold geometric shapes and splashy interiors helped reinvent this once-stuffy classic. From the marble-floored lobby with its narrow black and white floor stripes, to the curvy pink-lit bar, it’s like stepping into a Tim Burton film. 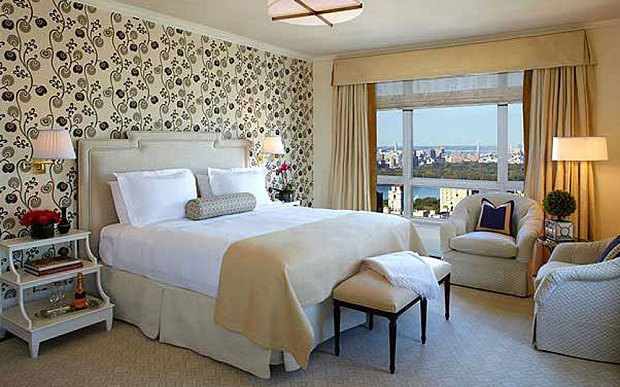 The twin-columned building features 188 Art Deco-style rooms and suites replete with all mod-cons, some with stunning Central Park views. Majestically situated on Madison and 76th, The Carlyle has been a favourite of everyone from Jackie O to Lady Di, and numerous presidents, tycoons, and Hollywood stars in between. A handsome 35-storey 1930s Beaux Arts building, grab a cocktail at low-lit Bemelmans Bar off the lobby, or catch a show at supper club Café Carlyle, where Woody Allen plays clarinet every Monday night. 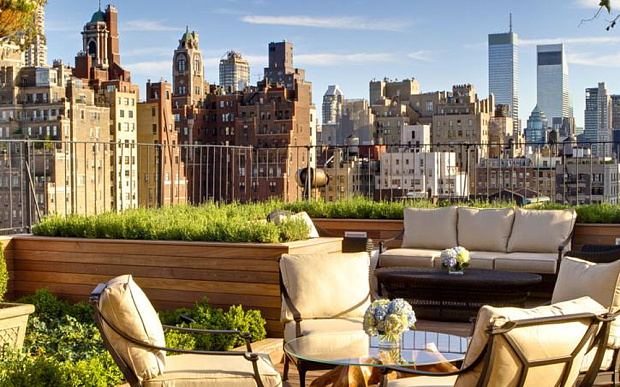 From the mesmerising Chuck Close tapestry of Kate Moss in the lobby, to prize pieces by Richard Serra and William Kentridge near the Coco Chanel-inspired Bar Pleiades, The Surrey has the exquisite feel of a billionaire’s townhouse – but with room service. Handily located at Madison and 76th, rooms range from classic “salons” with fireplaces and private terraces, to suites with separate living areas. Ground-floor Cafe Boulud is a spot for Manhattan’s rich and famous. At Madison and 76th, the elegant heart of the Upper East Side, a block from Central Park and a short walk from the Met, the Guggenheim and other galleries.

This article was written by Douglas Rogers from The Daily Telegraph and was legally licensed through the NewsCred publisher network.