In recent years there’s been an influx of new cruise ships vying to be the biggest and most thrilling at sea. At the same time, however, another trend has arisen: smaller vessels catering for passengers who don't want huge ships with giant water slides and race tracks and instead seek a more intimate and sophisticated vibe (with excellent food and drink to boot).

Viking Cruises has tapped into this demand. A long-time river cruising specialist, it has added six new adults-only, ocean-going vessels to its fleet since 2015. Almost identical, each ship can carry a maximum of 930 passengers and visits destinations across the globe, from Asia to Alaska. I board the latest ship, Viking Jupiter, on a 15-day voyage from Barcelona to Copenhagen and find it has all the ingredients for a relaxing and culturally-enriching cruise.

Viking was founded by Norwegian billionaire Torstein Hagen, and Nordic flavours permeate the company’s ships, from the stylish, yet under-stated furnishings, featuring materials like Swedish limestone, birch and juniper wood, to the mostly Scandinavian art and antiques in the public areas and staterooms. Split into five categories - plus the unique 123 square-metre Owners’ Suite - all rooms and suites have private verandas from which you can take in the views of the sea and your ports of call. In-room movies, ship-wide WiFi and 24-hour room service are among the complimentary perks included in the cruise fare. 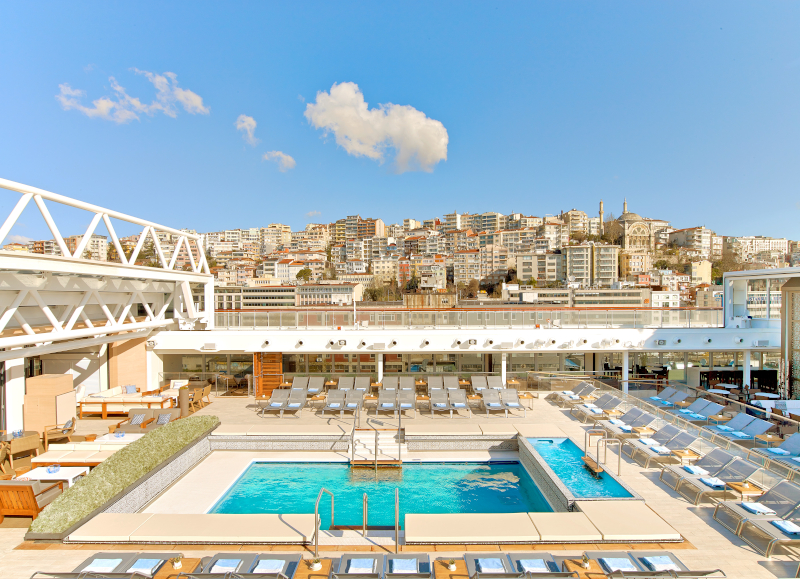 The trouble is choosing a spot by the pool

Guests are free to use the ship’s LivNordic Spa, where you can embrace a traditional Nordic bathing ritual and detox. As well as myriad places to warm yourself up, including a sauna, steam room and 36-38C pools, there are cooling-down spots, most notably a Snow Grotto, which is -10C, has icicles dangling from its ceiling and fresh snow similar to that produced by ski resort machines. Private spa treatments can also be booked for an additional fee, and there’s a free-to-use gym with cardio and weights equipment. The ship also has heated outdoor infinity pools, a central swimming pool under a retractable roof, and a ping-pong table and golf putting on the top, 9th-floor sports deck. 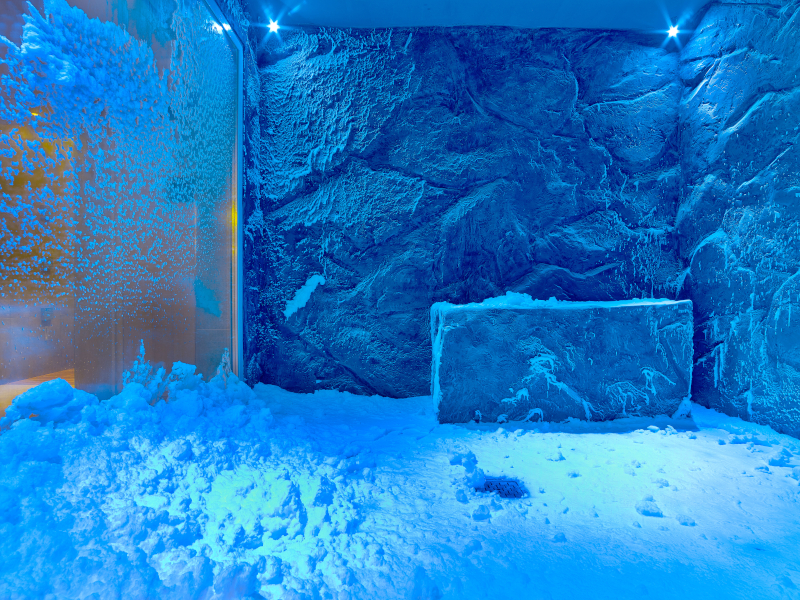 The Snow Grotto, a unique feature of the LivNordic Spa

A smorgasbord of culinary options will tickle your tastebuds. The main restaurant serves a la carte breakfasts and dinners and has an “elegant-casual” dress code (leave the tuxedo at home!). At the World Cafe, you’ll be tempted by tantalising buffets throughout the day (look out for the superb sushi and sashimi at lunch and in the evenings). As well as daily meat, seafood and vegetarian offerings, there are themed dishes depending on where your ship is cruising. So, for example, in Spain, there’ll be the likes of paella; in France, expect fondue and bouillabaisse (fish stew). House wine, beer and soft drinks are complimentary with meals and you can also reserve a table - at no extra cost - at the ship’s two speciality restaurants, Italian affair Manfredi’s and the eclectic Chef’s Table. Various snacks are served across the ship, including afternoon tea, waffles coated with Norwegian brown goat’s cheese and smorrebrod (Scandinavian open-faced sandwiches). 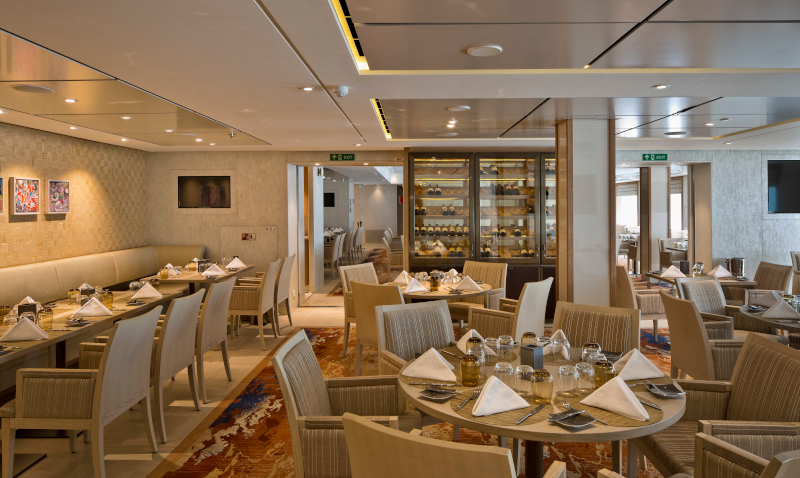 Meet you at the Chef's Table?

A Viking cruise certainly stimulates the mind, whether you’re on guided shore excursions in culture-rich ports, leafing through high-brow coffee-table books in the ship’s cosy lounges or browsing works by artists like Edvard Munch - the Norwegian best known for “The Scream”. The ship has fascinating exhibits about the ancient Vikings and on the stairwell walls are reproductions of the Bayeux Tapestry, which charts the AD1066 invasion of England by the Vikings’ Norman descendants. Learn more as you roam the decks by listening to the Viking Art Guide app. You can also watch live performance from classical musicians, take cookery classes and attend lectures by guest speakers and the on-board historian and astronomer. 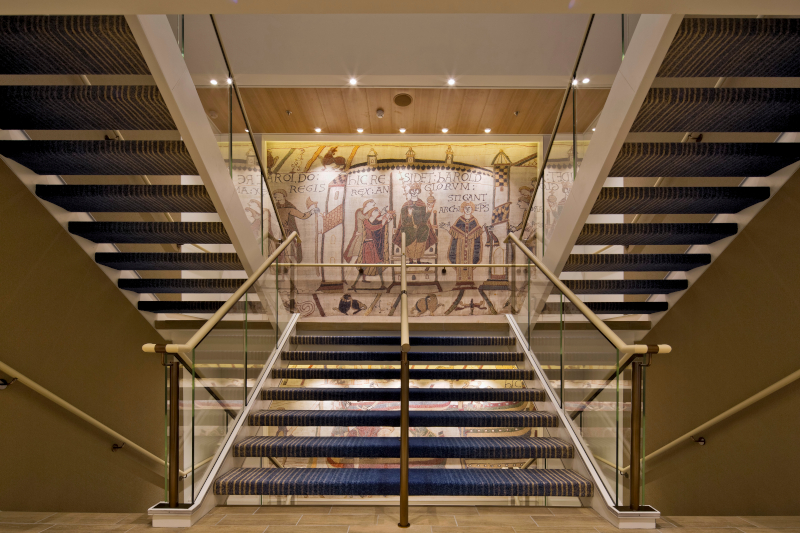 A reproduction of the Bayeux Tapestry featured on the stairwell walls

Viking Jupiter, and its slightly older sibling Viking Orion, are unique among the Viking fleet for having an Explorers’ Dome. Seating up to 26 people, this high-tech planetarium-theatre showcases mind-expanding panoramic films, including a 2D flick that follows a team of photographers to the Arctic Circle as they chase the mystical Northern Lights. Don 3D glasses to enjoy two other mesmerising films that draw you in with tales of space exploration, distant stars and galaxies and the missions to Mars. Not only does Viking Jupiter take you to places like the Mediterranean, the Baltic region and South America, it’ll also inspire you to go stargazing on the upper decks. That's definitely a nice way to walk off your dinner. 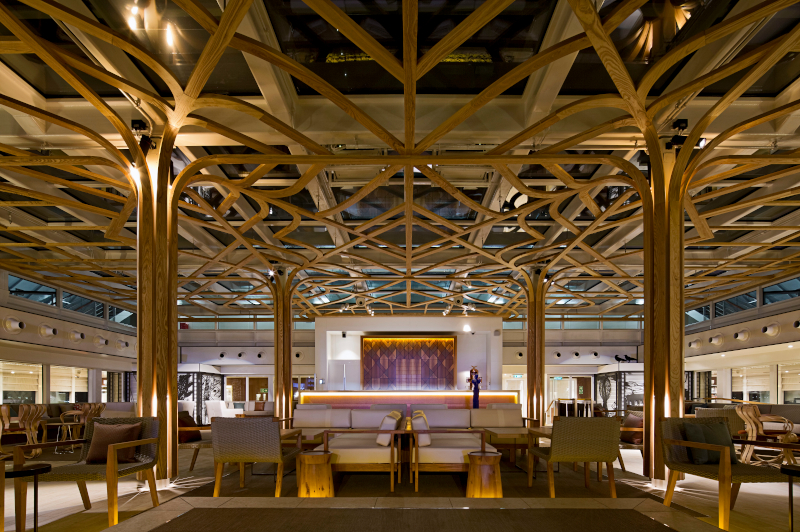 Perhaps find a spot in the Wintergarden and stargaze

Fit For A King - Luxury Palace Stays In India
10 May 2019
The graciousness of Indian hospitality is world renowned, which is why India’s luxury hotels offer a truly exclusive experience. For travellers who
Read Time: 2.9 mins
First and Business

Luxury Cruises You Have To Add To Your List
17 April 2019
Boutique and luxury ships offer the ultimate in comfort and pampering. From stylish yachts to sleek expedition ships, luxury cruises are redefining
Read Time: 5.3 mins