Words by Stacy A. Anderson

MIDDLEBURG, Va. (AP) – Virginia is home to more than 250 wineries, from the Blue Ridge Mountains to the Chesapeake Bay. The state's Middleburg area, in Loudoun County, has two dozen wineries alone, and it's so close to Washington that it calls itself "DC's Wine Country." Middleburg is about an hour's drive from Washington, D.C., or about 24 miles (39 kilometers) from Washington Dulles International Airport – perfect for a day trip or long weekend. Just in time for fall, October is Virginia Wine Month with special events to take in autumn foliage and milder weather. 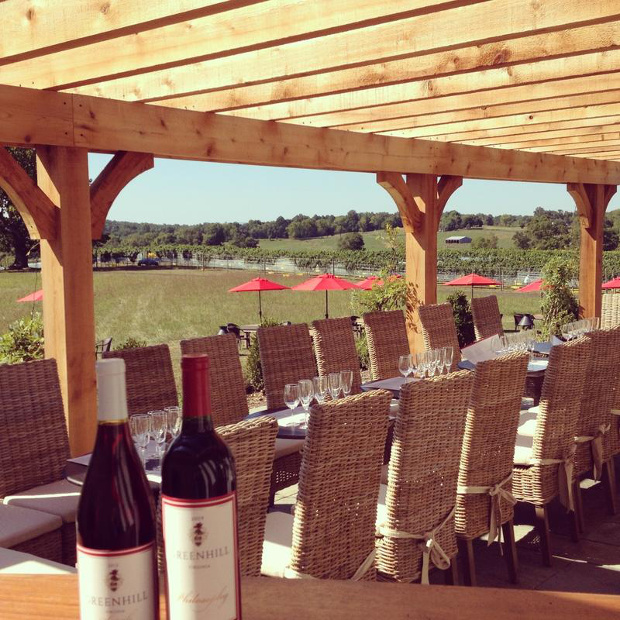 Cana Vineyards and Winery of Middleburg is named after the town of Cana of Galilee where Jesus turned water into wine at a wedding feast. The winery offers the best bang for your dollar with eight tastings for $10, plus a souvenir glass. Here you could have a traditional cabernet or merlot, but why not try their uniquely crisp and tart Blueberry Apple wine or Rhapsody in Red, a semi-sweet pinot noir. The winery – perched on a hill that overlooks the Bull Run Mountains— hosts live bands every Saturday and Sunday. Cana celebrates its third anniversary on Sept. 19 with local vendors, food, live music, photo booths, face paintings and more.

Greenhill Winery and Vineyards dubs itself the boutique destination winery. There's a historic stone house and outdoor seating on the 128-acre property, great for picnics and dog-friendly. A sampling of seven wines in the tasting room costs $14. "Grapes to Glass," a two-hour, private tour through the vineyard and barrel room with a wine tasting is $35 per person. Sales and marketing director Rebekah Pizana said first lady Michelle Obama has visited the winery and is a fan of Greenhill's 2013 and 2014 off-dry (mildly sweet) seyval blanc. (The first lady's office declined to comment.)

Luxury accommodations in the region include the Salamander Resort and Spa, opened by entrepreneur Sheila C. Johnson, co-founder of Black Entertainment Television, in summer 2013. Facilities include a cooking demonstration studio, wine bar, billiards room and a full-service equestrian center with a riding arena. Bring your own horse or ride one of Salamander's horses — you don't need to be staying at the resort to book a trail ride.

Salamander's spa includes a salon, fitness center, steam room, heated stone lounge chairs and courtyard with a pool and private cabanas. Rooms at the resort start at $425 during the peak months of April, May, June, September and October. Watch for specials, like a $149-a-night deal during Super Bowl festivities.

For a more quaint stay, try the Red Fox Inn and Tavern. The inn – which opened in 1728 and is listed on the National Register of Historic Places – has 15 guest rooms and the Middleburg House, a two-bedroom home. The inn is walking distance from many Middleburg businesses and shops on the main drag along Washington Street. The Martha Washington, an average-size room with a king bed and shower only, could run about $245 during peak season. Its Tavern offers more than 40 local wines and dishes including peanut soup, fried chicken and crab cakes.

Deltone L. Moore was inspired to open his Popcorn Monkey shop by memories of eating popcorn while watching baseball games as a kid in the 1970s. The store has more than 20 varieties including caramel corn, green apple, banana, lemon, strawberry, blue cheese, Buffalo wing, dill and Old Bay. It's open Wednesday through Sunday.

For a little history and culture, visit the National Sporting Library and Museum. The museum's collection includes paintings, sculpture, works on paper and objects highlighting horsemanship and racing, shooting, fox-hunting, polo, coaching, fishing and wildlife. Current exhibits include photos by Colin Barker in "Part of the Pack: The Hunt at Petworth" and paintings of horses in "Beverley Sanford McConnell: Portraits in Poetry."

The Middleburg Film Festival from Oct. 22-25 will feature movie screenings plus question-and-answer sessions with filmmakers and actors. The festival's film slate typically ranges from Oscar nominees to indies, foreign films and documentaries.

This article was written by STACY A. ANDERSON from The Associated Press and was legally licensed through the NewsCred publisher network.