A Day Aboard The Rocky Mountaineer

A Day Aboard The Rocky Mountaineer

I’m eating a hot scone and drinking a cup of freshly brewed coffee when someone yells, ‘Bear on the left!’. Immediately the delicious cinnamon crumbs on my plate - which moments before were all-consuming - become irrelevant. Everyone’s faces are smooshed against the glass-domed windows, eyes darting along the tree-line in search of the until-now elusive bear. And there he is! A black bear, minding his own business, lumbering through the bushes eating berries.

All of a sudden, I feel a sense of awareness of where I am. On a train, moving through Canada’s mighty Rocky Mountains, in a real wilderness. And I remember how it feels to be in awe.

This is a day aboard Canada’s Rocky Mountaineer. 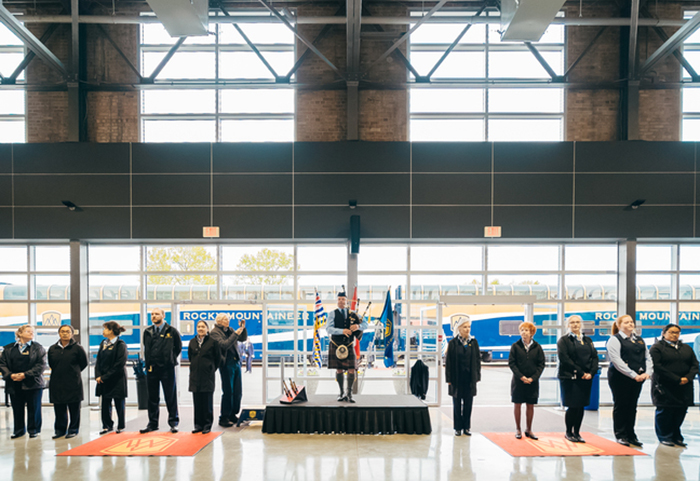 7am, at the station in Vancouver

We arrive at the station and I feel like I’m in a busy intercity train station somewhere in Europe. A gentleman plays the piano, and the energy seems to build with his notes. People have waited a lifetime to be here. There’s the infamous all-aboard call and we walk onto the platform in the early morning sun. It’s time for the journey to begin. 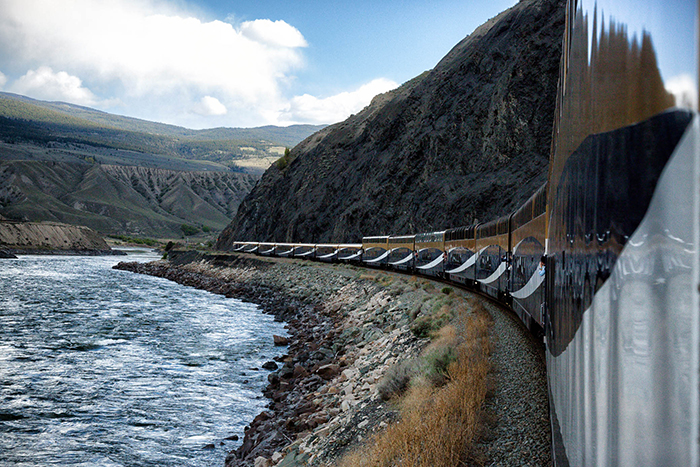 8am, leaving the city behind

Pulling out of the station we pass what seems like an endless amount of train yards. As Vancouver’s skyline slowly shrink into the distance, the suburbs flatten out, and soon enough houses are replaced with vineyards, cattle stare us down from the fields. 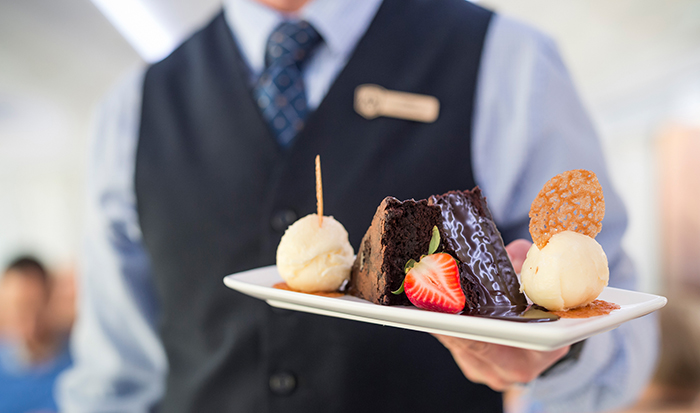 9am, the culinary delights begin

Technically we’re served two meals a day on the train: breakfast and lunch. In reality, we’re served about eight. In Gold Leaf, the train’s version of upper class, guests are seated in a glass domed carriage upstairs, with a dining room downstairs. On day one, half of the carriage gets first meal service, then on day two it switches. If you’re in the second service, you’re treated to pre-breakfast and a pre-lunch by way of the aforementioned cinnamon scone (breakfast), and an always appealing cheese and wine course (lunch, obviously). I am all for a long meal, so this is pure heaven. 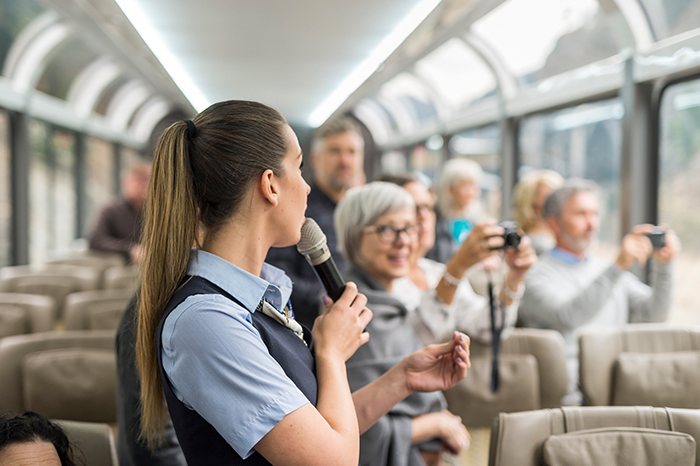 As the train meanders through changing landscapes, we’re told stories of the land, and of the people who came from countries afar to build this mighty mountain conquering railway. We pass the confluence of two rivers where Canada’s largest sockeye salmon spawn takes place with some 3.4 million fish every year. And we learn from Chef Daniel about how the food on our plates onboard come from the landscapes we’re passing through - Alberta beef, Fraser Valley wines, cheese from a dairy we go right by, Salmon from the coast of BC. It’s a kind of real life National Geographic meets Chef’s Table. 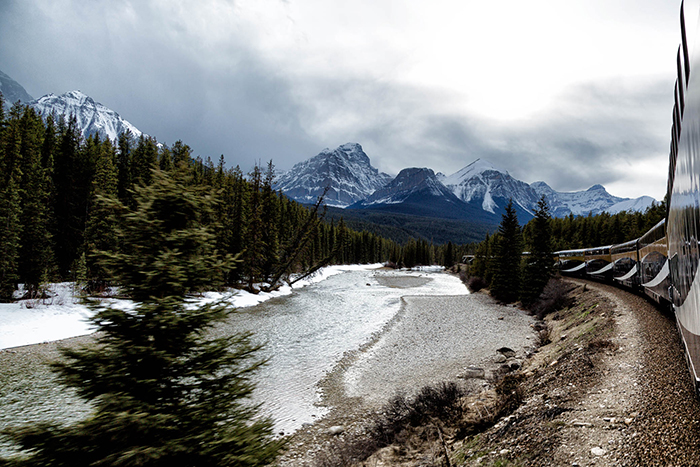 12pm, our first glimpse of the mountains

Our eyes are peeled for wildlife, and around every bend we find ourselves whipping our heads from side to side to see if the mountains are yet visible. Then all of a sudden we get our first glimpse up ahead. The snow capped peaks have arrived and we know the real journey through the Rockies has just begun. We spot elk and Bighorn sheep, eagles and mountain goats, black bears and more eagles, and eventually a mighty grizzly. 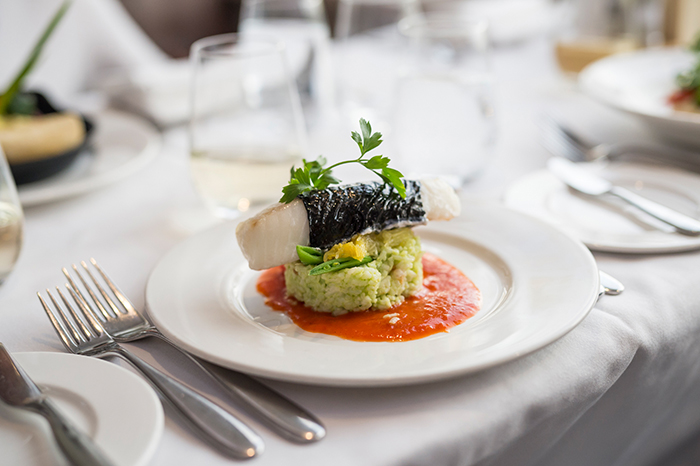 They say there’s no rest for the wicked. Here there’s none for the full. And there is certainly no one going hungry. It seems like we’ve not long finished breakfast, but somehow the smell wafting upstairs from the kitchen makes my tummy rumble, so on to lunch we go. Another three course affair, and I am definitely not complaining.

3pm, we wave to Doris

Since its first journey along the railway in 1990, Rocky Mountaineer has become an integral part of the communities along the rail line. Aside from providing jobs and bringing travellers to these parts, it’s gathered a number of regular wavers - locals who wave to the train every day as it passes. Doris, one such waver, was once given a ticket to go onboard, while the station staff from Kamloops went to her house to wave as she passed by on the train. 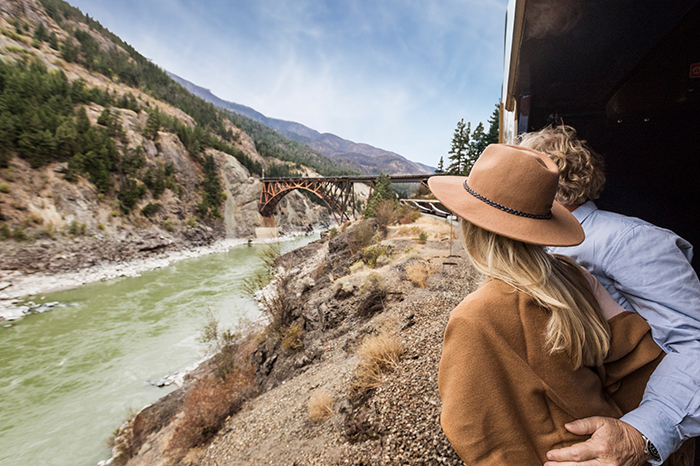 Slow tv is really having a moment, and this is the real deal. I spend hours at a time on the open-air platform, sometimes with fellow travellers, sometimes alone, but often in silence. breathing in the crisp air and watching the forest, valleys and peaks move by, this here is what I really came for. 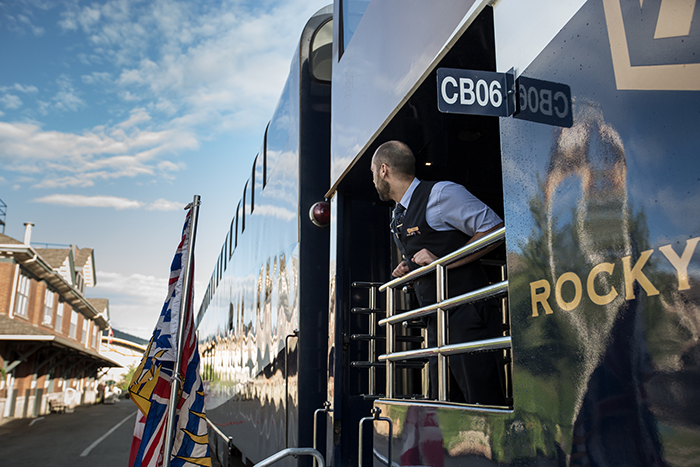 7pm, pulling into the station

As we pull into the station, we’re given room keys for the hotel, where our bags are already waiting. This has to be the easiest hotel checkin I’ve ever experienced. Day one is down, and after dinner at a local restaurant, and a wander around town, my head hits the pillow. Eat, admire, learn, sleep, wake up, and repeat it all again tomorrow.

This is probably, no definitely, one of the best journey’s I’ve ever been on.