We Previewed Disney's Star Wars: Galaxy’s Edge & This Is What We Thought

We Previewed Disney's Star Wars: Galaxy’s Edge & This Is What We Thought

I was one of the first 500 people to preview the brand-new Star Wars: Galaxy’s Edge land at Disneyland Resort ahead of its official opening on 31 May, 2019, and as a Star Wars fan, I was interested to see how Disney was going to bring Galaxy’s Edge to life. 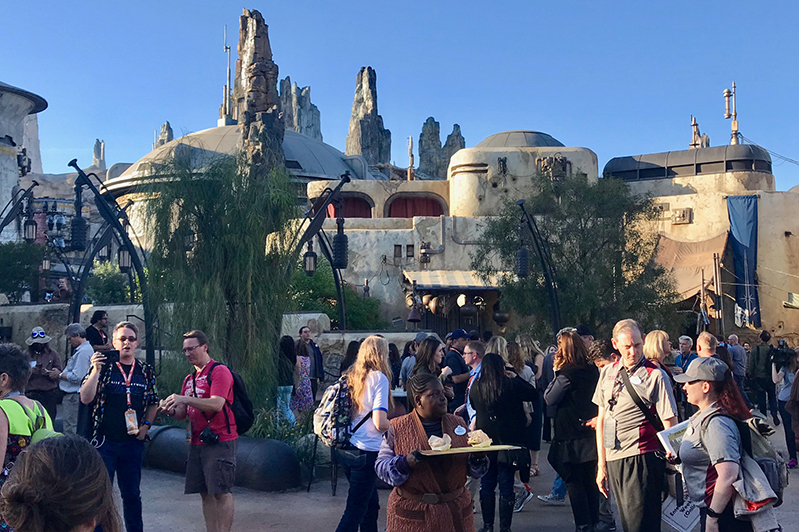 Me and 499 friends at the preview of Star Wars: Galaxy's Edge land at Disneyland Resort.

And I was not disappointed – I loved that Disney created a new land that wasn’t from the Star Wars films but easily relatable to them. It was well worth the wait. 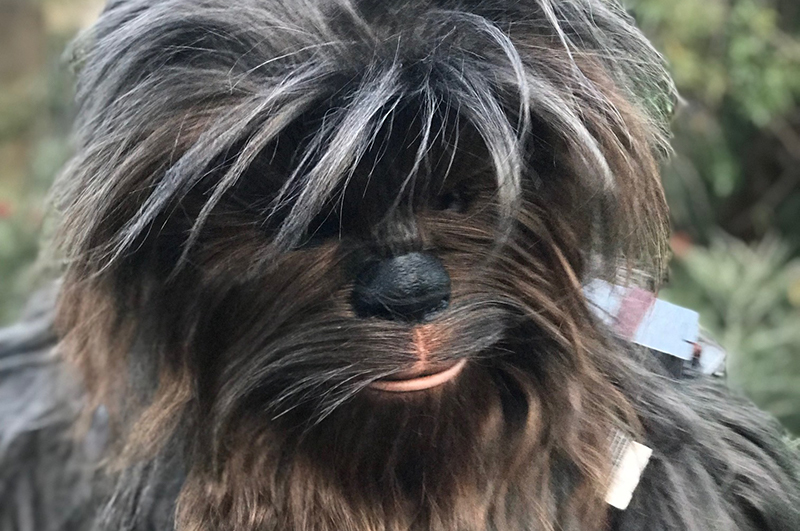 Up close with one of my faves – Chewbacca!

The setting of Star Wars: Galaxy’s Edge is a long-forgotten planet known as Batuu, which is located on the edge of the galaxy between the Unknown Regions and Wild Space, and its largest village, Black Spire Outpost – a refuge for individuals associated with the Resistance.

Stepping into the all-new land, I was immediately taken by the otherworldy feel of Batuu and felt a sense of excitement and anticipation to be one of the first people to experience it. Cast Members in this all-new land have customised costumes and are always in character.

As with all things Disney, the attention to detail is astounding. You are immersed in the sights and sounds and we were quickly brought into the story of the First Order and the Resistance by the Cast Members dressed in costume and always in character. Around every corner another element of the Batuu story unfolded – it was thrilling. 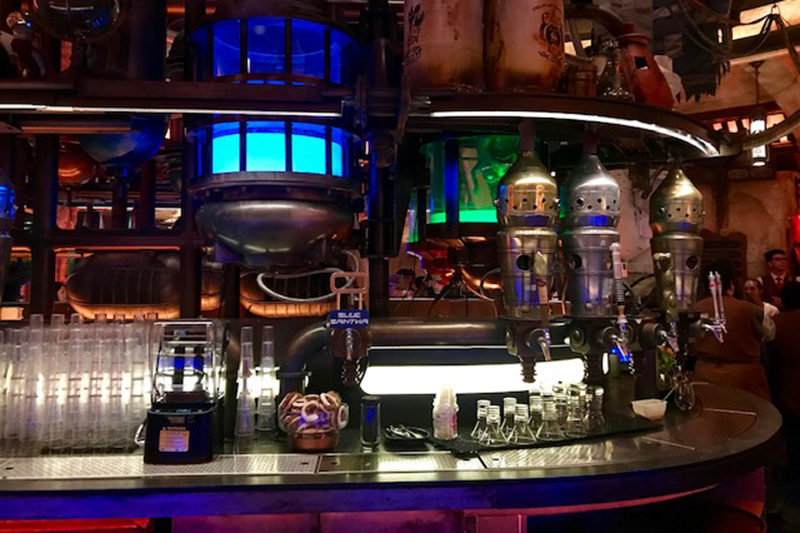 The bar at Oga's Cantina – a refuge for those who'd prefer to remain under the radar.

I was immediately impressed with the major attractions such as the Millennium Falcon: Smugglers Run ride, bustling Oga’s Cantina and the Market.

Millennium Falcon: Smugglers Run is a full-scale replica of Han Solo’s ‘hunk of junk’. It’s essentially a flight simulator where you play one of three roles: pilot, gunner or engineer. Collectively you need to complete a smuggling mission with as little damage to the Millennium Falcon as possible. It’s a tonne of fun and depending how well you complete the mission will determine how you are treated at Oga’s Cantina for a post-flight drink! 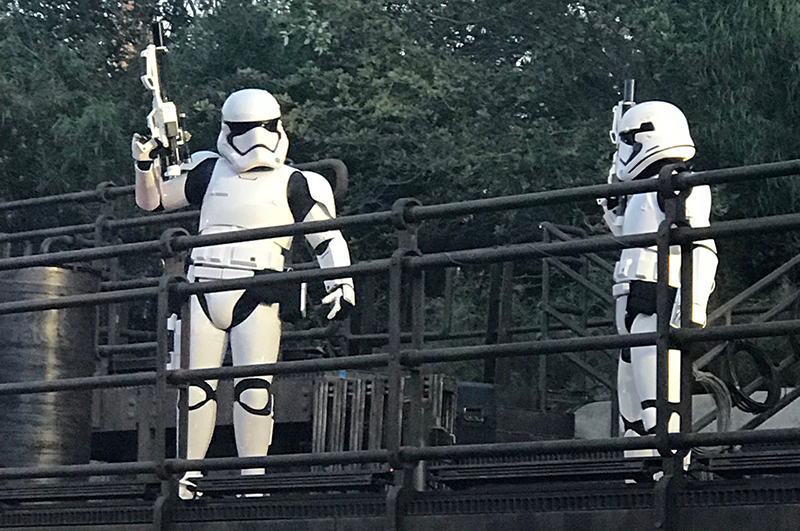 Keep an eye out for Stormtroopers!

However, it was the small details in every aspect of this land that were the standout features for me. Everywhere you looked was something that embedded you into ambience of the planet Batuu – droids, lightsabers, Stormtroopers, Resistance fighters. Even the bathrooms are themed. 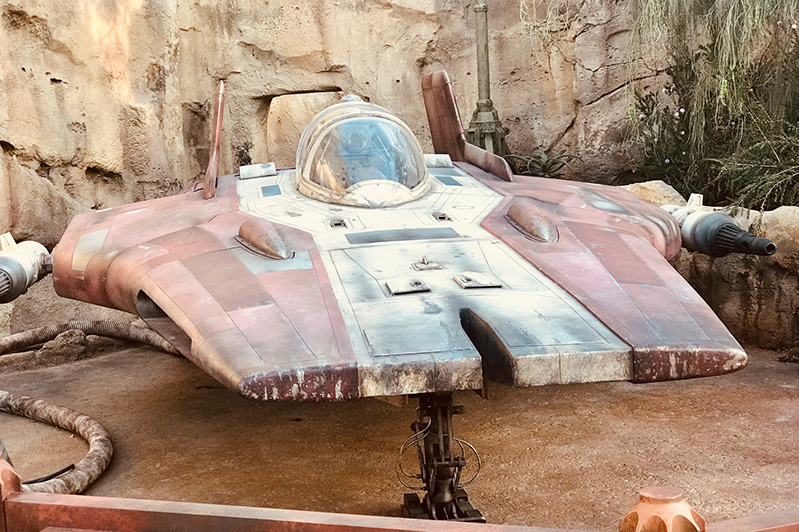 Fighter pilots at the ready!

I was lucky to try some of the Star Wars themed food and drink, too. I sampled the ever-popular frosty Blue Milk drink from Oga’s Cantina and the Milk Stand, the Outpost Mix sweet and savoury popcorn trio from Kat Saka’s Kettle and a fantastic vegan dish called Felucian Garden Spread – a plant-based ‘meatball’, hommus and pita dish – available at Docking Bay 7 Food and Cargo.

Even the bottles of Coke are Star Wars-themed!

I must admit that I wasn’t a fan of the Blue Milk (there’s also a Green Milk!) but the other rations went down a treat. Particularly memorable are the Coca Cola bottles in the shape of droids! A curious creature at Oga's Cantina – the attention to detail is astounding.

I think Star Wars fans will be happy with the new land of Batuu. There’s a link to what you know and love about the Star Wars franchise and enough newness to create a great buzz. Star Wars: Galaxy’s Edge is a fabulous, interactive land where you can enjoy a different experience with every visit – I’ll definitely be back for when more attractions open later in the year, such as the Star Wars: Rise of the Resistance ride!

Any spare time and money, Christie spends on travel. Having travelled to 50 countries so far, there's hope for 50 more. Christie has worked within Flight Centre Travel Group for the best part of the last 24 years, currently in the product division. When not working or travelling, her favourite pastime is sitting around a fire with her husband, hounds and horses on their five-acre property with a decent glass of red.