Southern Wales has a lot more going for it than former coal-mining towns and fields bleating with sheep. For one thing it has some of the most dramatic coastal scenery in Britain, and history rolls out in waves too. One minute you could be in a Roman outpost and the next strolling around the battlements of a Norman castle. Someone mention King Arthur? Yes, tales of the mysterious ancient monarch abound around here. Some say the village of Caerleon was even the site of the King Arthur’s Camelot, and the legendary Round Table. 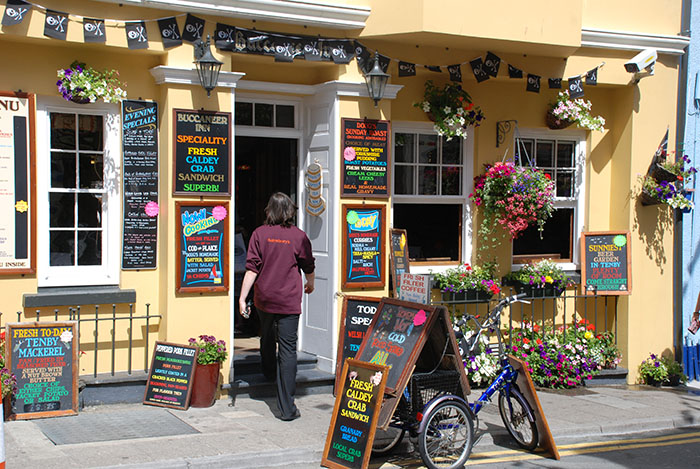 Pirates ahoy at the Buccaneer Inn Pub in Tenby.

Day 1: The Severn Bridge to Caerleon 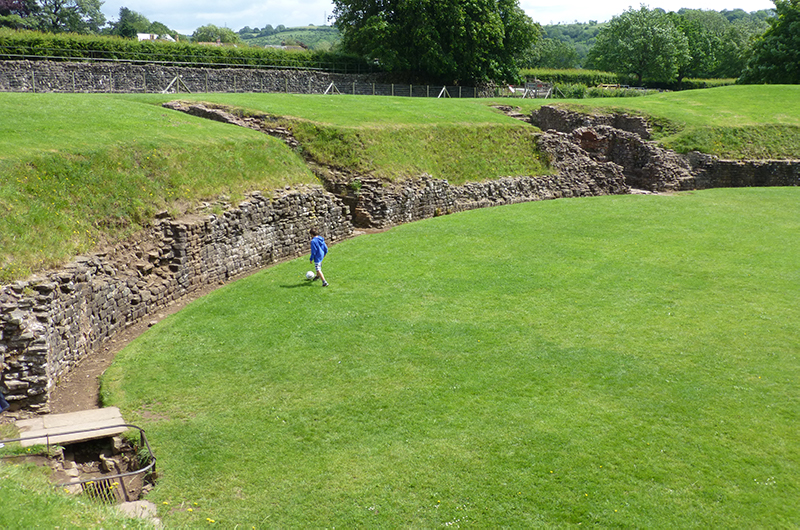 Part of the Caerleon Amphitheatre.

Drive across the magnificent Severn Bridge from England into Wales and soon you’ll be in Caerleon, situated on the muddy banks of the River Usk. From around 75 to 300 AD this pretty village was the base of a vital Roman legionary fortress of Isca. Walk inside the only Roman amphitheatre in Britain, explore the Roman barracks and Roman baths, and enjoy an excellent Roman-themed museum.

It’s worth staying a night around Caerleon because there are a few things you shouldn’t miss. Head to The Big Pit National Coal Museum, where you can dress up like a miner and be transported by cage deep underground to the coalface. Then it’s off to Caerphilly Castle, the largest castle in Wales. It dominates the landscape with its imposing stone towers and surrounding moat. From Caerleon the M4 motorway stretches for 27 miles (43 kms) to Cardiff. 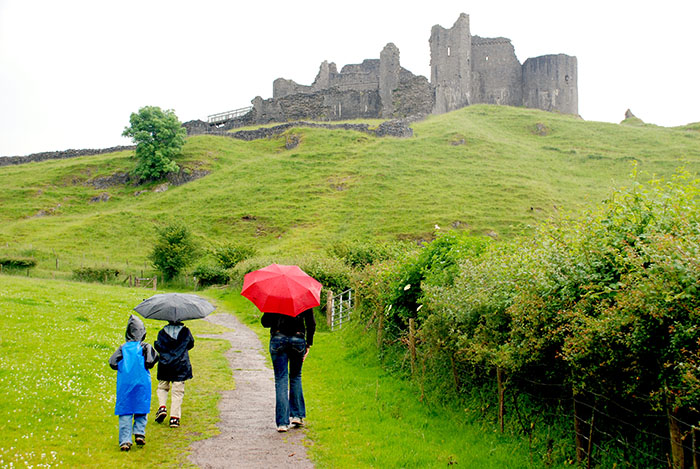 Carreg Cennen Castle – one of Wales' many castles.

The capital of Wales is home to Cardiff Castle, a historic hotchpotch of Norman and medieval buildings complete with a Victorian Gothic revival mansion. Walk between its walls and discover atmospheric corridors once used by locals evading World War two bombings. Tuck into a traditional Welsh Cake at the local indoor market and drop into the Dr Who Experience in Cardiff Bay, before driving to Swansea along the M4 for 41 miles (65km). 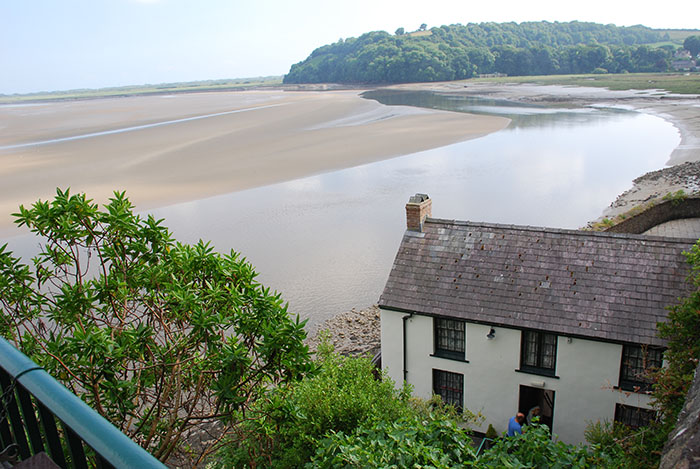 The up-and-coming seaside town of Swansea has one of the best indoor markets in Britain. Tour Dylan Thomas’s birthplace, and explore the wild beaches of the Gower Peninsula. Stop off at the tiny coastal village of Laugharne during today’s 52-mile-drive (84km) and call into Dylan Thomas’ Boathouse, with its dramatic estuary views. The famous Welsh poet lived and worked here. Alternatively, stretch your legs in the extensive Welsh Botanic Gardens near Carmarthen. 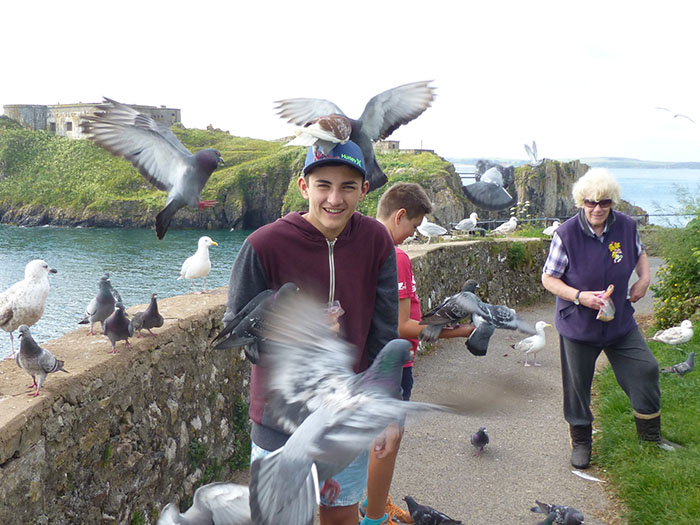 Picture-perfect Tenby is surrounded by high medieval walls, has a small working harbour, several long stretches of beach, and houses painted in contrasting pastels. Join the monks on Caldey Island, fish for mackerel in the bottle-green sea, clamber around one of the nearby Norman fortresses, and slump into a sunny beer garden with a pint of ale and a crab sandwich. 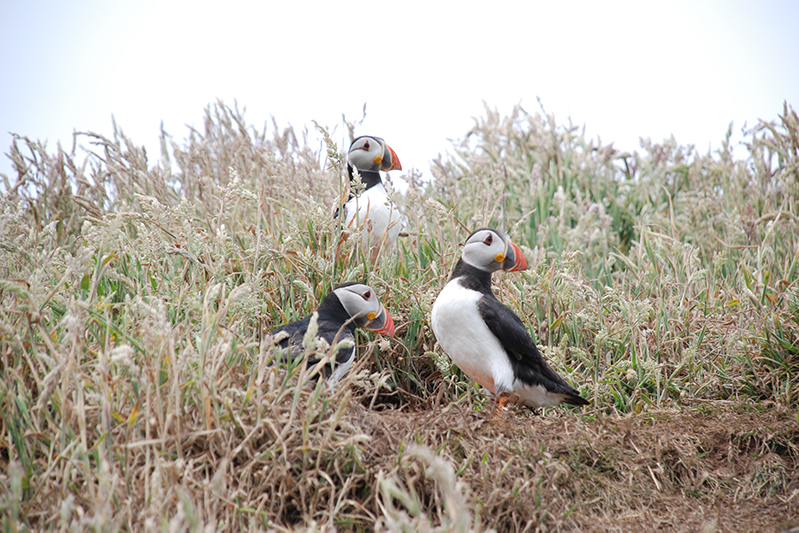 Head further west through wilder countryside to Skomer Island, where you can witness up to 6,000 breeding pairs of puffins bustling around the slopes with sand eels in their colourful beaks. Thousands of other birds nest here too, including giant gulls and Manx shearwaters. It’s 50 miles (80kms) from Tenby to St Davids. 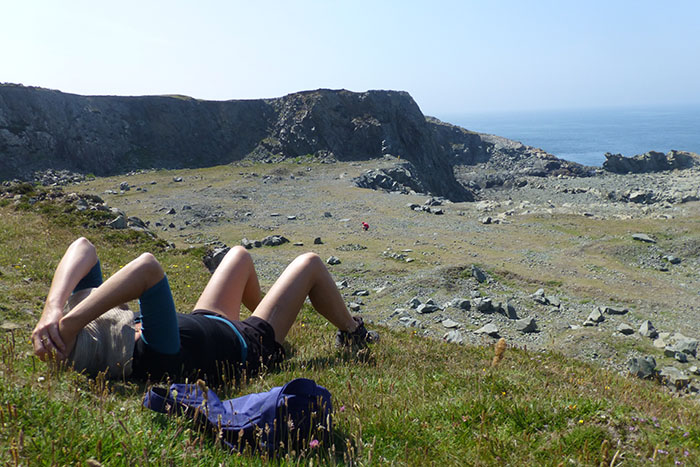 On the famous Pembrokeshire Path.

St Davids Cathedral is the only cathedral in Britain to be built in a hollow, rather than in a prominent position – thanks to Viking raids that led to it being burnt down on many occasions. In 1081 William the Conqueror dropped in, but only to pray. Lace up your walking boots today because the cliff tops are calling. The world-class Pembrokeshire Coast Path stretches for 186 miles (300km) along remote beaches and across dramatic headlands. You could go on for days!

Explore the UK with our latest deals on sale here!

Marc Llewellyn is an award-winning Sydney-based travel writer and author. His travel books include Riders to the Midnight Sun, about a 4,500km bicycle trip from the Black Seas to the Russian Arctic, and Finding Nino - a Seachange in Italy. He is the former President of the Australian Society of Travel Writers (ASTW).