Geisha Spotting and 300-Year-Old Teahouses: An Evening In Kyoto

Geisha Spotting and 300-Year-Old Teahouses: An Evening In Kyoto

Japan is an enigma – a thoroughly modern society rooted in traditions and handicrafts that date back thousands of years.

Some traditional rituals and historic practices are known outside Japan, such as tea ceremonies, martial arts practice, shodo (the art of calligraphy), origami and ikebana (floral arrangement), but to learn more about these centuries-old rituals and crafts, I travel to Kyoto. From the bamboo walls of the teahouses and the glowing lanterns of the Yasaka Shrine to the bustle of the main street of Hanami-Koji, experiencing Kyoto’s ancient streets by night is an essential part of visiting Japan’s city of tradition. 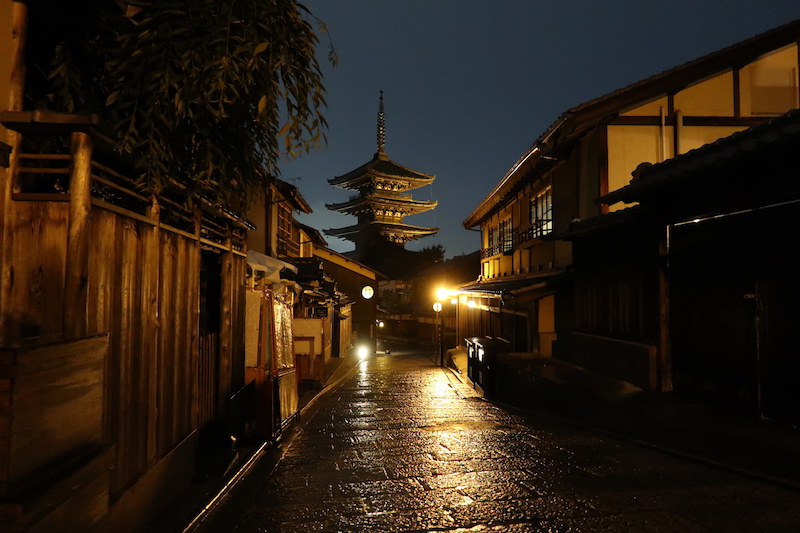 Peeling away the layers of Higashiyama’s backstreets. Photo: Sam Aldenton.

The cultural heart of Kyoto is undoubtedly the historically significant area of Gion, which is the perfect spot to begin our tour. Gion Corner is easy to find – just two blocks east of Shijo-Ohashi Bridge outside Gion Kobu Kaburenjo Theatre. Our guide, Yutah, leads us down Gion’s most famous street, Hanami-Koji or ‘blossom viewing lane’, which is lined by traditional teahouses or chaya. Tourists meander around Ichiriki Chaya, a huge red-walled teahouse, trying to get a glimpse inside. The 300-year-old teahouse is considered the most exclusive establishment in Gion. Inside wealthy businessmen and politicians are entertained by elusive geisha, known as geiko and maiko (apprentice geiko) in Kyoto, on an invitation-only basis.

We slip down a hidden side lane and learn about the geiko, whispering to avoid disturbing the occupants of the wooden teahouses we pass by. Yutah points out the names of the girls living inside each teahouse written above each doorway. The role of the geiko is to perform the Japanese arts of song, dance, tea ceremonies, flower arrangement, playing the shamisen and even learning the Kyoto dialect. Girls from all over Japan come to Kyoto to train in the art of the geisha from the ages of 14 to 17 and sounding the part is one of the requirements.

We learn to discern the difference between the maiko and geiko – the apprentices wear plenty of colour, a long sash and large platforms with an elaborate flower comb in their hair, while geiko wear more refined and modest kimonos, smaller sandals and have wigs with simple decorative combs. Tiptoeing through the winding lanes, we peel away the layers of Higashiyama’s backstreets. By then the sun had well and truly set and the red and yellow lanterns peppered along the path began to cast a warm cinematic glow. Slinking around yet another corner, we see a stone torii gate – the entrance to our next stop, Yasui Konpira-gu Shrine.

The charming centuries-old shrine was something we would never have come across on our own and nothing like the larger, much busier shrines of Kyoto, such as Fushimi Inari Taisha. Yuta explains that shrines belong to the religion of Shintoism and temples to Buddhism – two of the main religions practised in Japan.

Walking through the old town’s lantern-lit streets was a magical and transformative experience, however being able to delve behind closed doors or at least learn about what happens behind them gave me a greater understanding of how Japan’s rituals and traditions have come to shape the nation’s distinct culture today.