The sun is rising and casting a dappled light through the palms onto the bronze statue of Duke Kahanamoku at Waikiki. A lone surfer walks past, pauses and nods his head in reverence.

He touches one of the fresh leis that have been draped over Duke’s outstretched arms. Here in Hawaii ‘The Duke’ is more than just a hero.

Not only did he popularise surfing around the world, including Australia, he won five Olympic gold medals for swimming between 1912 and 1924, was a Hollywood actor and then later became the Sheriff of Honolulu, the role in which he hula danced with the Queen Mother amongst other dignitaries and celebrities. 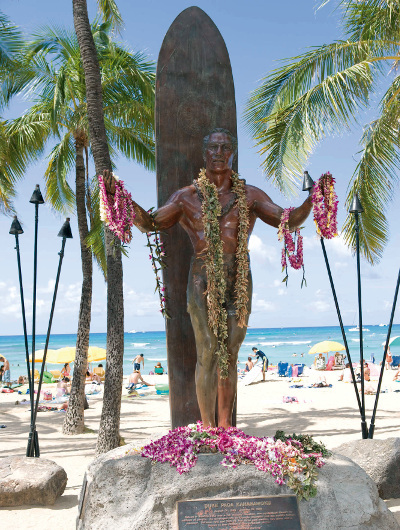 The statue of the Duke is revered by all

Amongst his long list of achievements, Duke also rescued eight men using his board after a yacht capsized in Newport Beach, California. The plaque under the statue of Duke, who passed away in 1968, reads: “He has honored us all.”

Surfing originated with the ancient Hawaiians and Duke revived it across the world. It was 100 years ago that as a missionary of sorts, Duke performed a surfing demonstration at Sydney’s Freshwater Beach. With an abundance of surfable coastline, he knew Aussies would love the sport.

“Before I left that fabulous land, the Australians had already turned to making their own boards and practising what I had shown them in the surf,” he said at the time.

Duke and his wife Nadine – whose father was an Australian opera singer – were frequent visitors to Australia. Nadine’s last trip to Sydney was for the 1994 dedication of a statue of Duke at Freshwater, commemorating his place in Australian surfing lore. 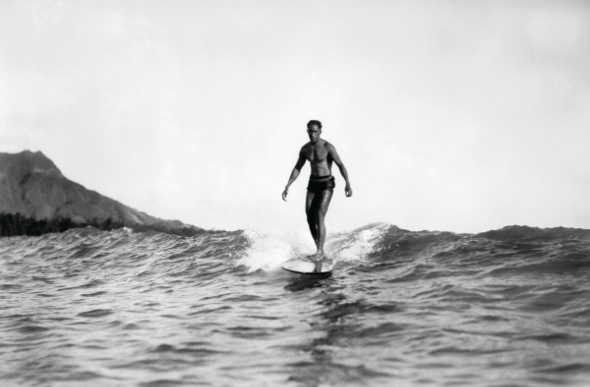 The Duke glides on a wave

And in his homeland, 125 years after his birth, Duke Kahanamoku is still the ‘Ambassador of Aloha’. Every year in August Duke’s Oceanfest celebrates his legacy by showcasing surfing, swimming, stand-up paddle boarding, canoeing, Hawaiian heritage and the spirit of Aloha.

Champion surfers, beachboys (similar to Australian surf lifesavers) and local celebrities all compete in water events at Waikiki while thousands cheer them on.

Before hitting the water, contestants hold hands and chant “1,2,3, Duke”. As part of the celebrations, there’s a ceremonial sunrise lei draping at Duke’s statue and a luau celebration.

Further up the beach, tourists and locals are drinking mai tais at Duke’s Waikiki, a bar and restaurant overlooking the spot where Duke rode his biggest wave, a giant 30-foot swell named Bluebird. 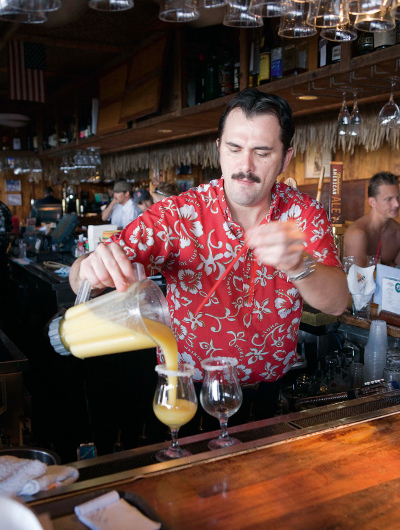 Cocktails go perfect with the beach at Duke's Waikiki

The bar, under the Outrigger Waikiki on the Beach displays original photos of Duke and memorabilia (he once had his own range of Hawaiian shirts) lines the walls. It is here that every year at the end of Duke’s Oceanfest, current and former beachboys gather in a circle, hold hands and bless Duke.

During his life, one of Duke’s number one fans was wealthy tobacco heiress Doris Duke. They became close when Kahanmoku taught her how to surf.

Duke Kahanamoku gave her the nickname ‘Lahilahi’, meaning fragile. Several biographers have argued that her baby girl, Arden, who sadly died at just one day old, was almost certainly Kahanamoku’s.

You can tour Doris’ abode, perched on a cliff near Diamond Head, known as Shangri La. She had a passion for Islamic art and this is reflected in the design of the house and the pieces obtained including incredible mosaics and amihrab from 1265 (she outbid the Metropolitan Museum of Art for it).

Her fascinating personality shines throughout the house – University of Hawaii professor of architecture Kazi Ashraf once said, “I see the house as a kind of autobiography of Doris Duke. Some people write diaries. Doris Duke built.” 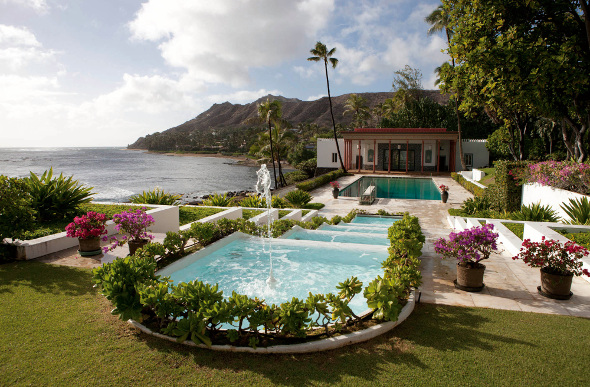 Love a holiday tipple? The Happiest Happy Hours In Honolulu

Do you surf? Chasing The Hawaiian Waves With Craig Parry

Duke Kahanamoku later met Nadine and they lived a happy life together. Nadine, who died in 1997, bequeathed all her personal archives to the Bishop Museum in the Kalihi district of Honolulu.

Not only are all their photos here (including various with visiting celebrities such as John Wayne and Vincent Price), one of Duke’s early surfboards, with his name across the bow, is preserved here.

Of course, you can be like Duke and grab a board and paddle for yourself. The calm, albeit crowded, waters of Waikiki are perfect for first-timers.

There are a number of rental companies and surfing schools available, including the legendary Waikiki Beachboys, of which Duke was once a member.

Oahu’s North Shore has world-renowned big-wave surfing beaches at Waimea Bay, Sunset Beach and the Banzai Pipeline. Get inspiration by watching the world’s best during the Vans Triple Crown of Surfing at the end of each year. 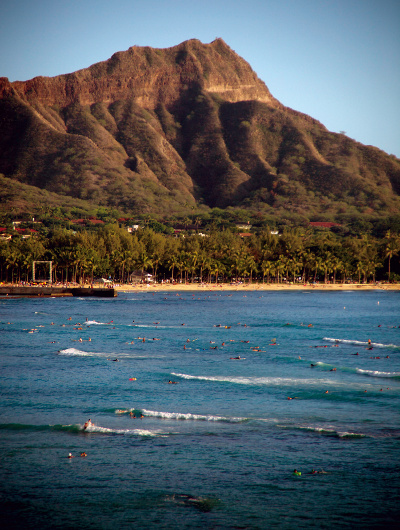 Diamond Head in Waikiki is loved by novice and pro surfers

On the island of Maui, you can see pro surfers carve the waves at Honolua Bay and Ho’okipa Beach during the winter months.

On Kauai island, dedicated surfers head to Poipu Beach on the South Shore and Nawiliwili Harbour in Lihue and Makua ‘Tunnels’ Beach on the North Shore.

On Hawaii island (nicknamed the Big Island) many of the beaches are suited to big wave riders with Honolii Beach Park being one of the best. Beginners should head to Pine Trees Beach north of Kona Airport and Kahaluu Beach in Keauhou.

And if you are heading out to surf for the first time, heed Duke Kahanamoku’s time-honoured advice: “Try to help one another and not hog the doggone waves!”

If you’re interested in exploring more than two of the Hawaiian Islands, the best way is to do is by ship. Even ardent ‘non-cruisers’ might want to consider booking a cabin on The Pride of America as you’re in port every day, which includes departing from Oahu, then spending two days each in Maui, the Big Island and Kauai before heading back to Oahu.

You can treat the ship as somewhere to rest your head after a long day exploring (and surfing) the islands. It beats having to pack up and go to the airport every second day.

Skip the buffet and head to one of the specialty restaurants. At Cagney’s Steakhouse you can dine on choice cuts of Certified Black Angus and at Jefferson’s Bistro the coq au vin and brulee are magnifique. Best though is the retro Cadillac Diner, open 24 hours a day to soothe any middle-of-the-night cravings. 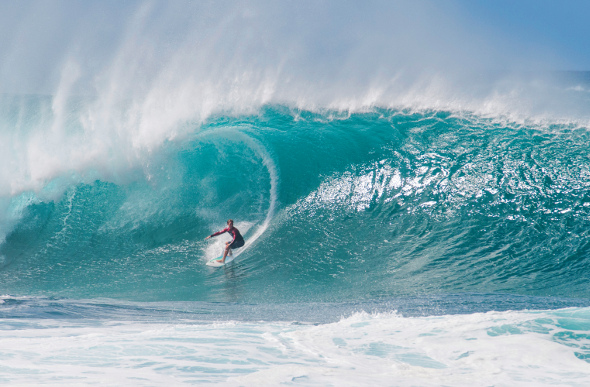 There’s a retro revival going on in Hawaii; tiki culture, Hawaiian shirts and muumuus is going through a resurgence of cool.

In downtown Chinatown’s small bars, DJs are spinning vinyl recorded on the islands in the 60s and 70s at a monthly party called Soul Time in Hawaii at Bevy bar. And vinyl record stores such as Jelly’s on Oahu are thriving.

Expect to sift through numerous copies of Elvis’ 1973 Aloha from Hawaiialbum (and be sure to visit his statue at the site the concert was recorded in Honolulu).

Fashion-wise, designer Roberta Oaks is leading the way in repurposing Hawaiian shirts and muumuus for the hipster set.

She has a store in Chinatown and recently did a collaboration with Urban Outfitters. And you can find vintage aloha shirts at Bailey’s, the brand Duke Kahanamoku launched in the 60s (which also offers shoes, skateboards and surfboards).

Sydney-based freelance travel writer Andrea Black specialises in travel relating to design, history, architecture and music. When visiting a city she will track down vintage vinyl record stores and bring home a local release from way back, the perfect sonic and historic artefact of a time and place. When flying long haul she has one rule: to listen to Link Wray’s 1971 self-titled album in its entirety.
more articles from this author