Located deep in the heart of southern Germany is one of Europe’s most popular tourist attractions. The Romantic Road winds its way from the Franconian city of Würzburg to the picturesque town of Füssen close to the Austrian border, and this 400-kilometre stretch of open highway plays host to some of the most spectacular scenery Germany has to offer.

When the medieval city of Würzburg was painstakingly rebuilt in the wake of World War II, it heralded the start of a new era of prosperity for this picturesque University town. Along with a faithfully replicated city centre came the start of a new tourism venture – a ‘romantic road’ tracing an old medieval route and highlighting some of the most quintessentially German landscapes along the way. 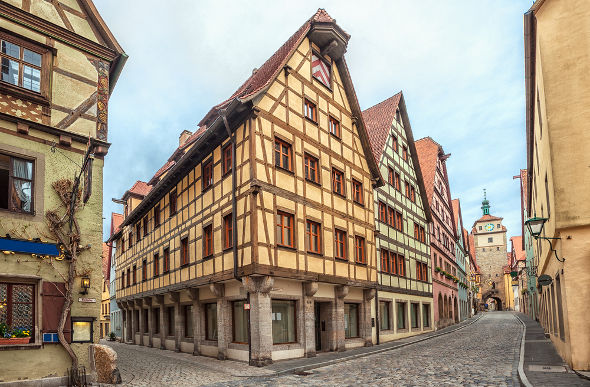 Exploring the heart of Bavaria

The Romantic Road winds its way south from Würzburg to the almost perfectly-preserved medieval town of Rothenburg ob der Tauber. Nestled high above the Tauber River, this unforgettable Bavarian village was a leading light of the Middle Ages; its prosperity reflected in its cobblestone streets and beautifully maintained timber-framed houses, with Rothenburg regularly voted one of Germany’s most picturesque towns.

One of the joys of hiring a car and steering it southward is the eye-catching scenery which rolls by from every corner of the Bavarian countryside. Pretty villages like Dinkelsbühl and Nördlingen give way to larger cities like Augsburg – Germany’s third-oldest and a city which has played a key role in Bavarian history.

While the comparatively sprawling Augsburg may lack the small-town charm of its surrounding villages, what this lively University town offers is the chance to enjoy a quintessentially Bavarian experience. From its spectacular Renaissance-style Town Hall to its 10th-Century watchtower and the countless traditional pubs and bars dotted throughout, this charming city is well worth a stopover on any Romantic Road journey.

Augsburg is by far the largest city along the Romantic Road, but it’s only the midway point of a fascinating multi-day drive. Indeed, one of the most enjoyable aspects of traversing the Romantic Road is simply taking your time to soak in the rolling hills and progressively dramatic Alpine scenery of one of Germany’s most iconic landscapes.

Arriving in an Alpine wonderland

By the time you arrive in Füssen, you could be forgiven for thinking you’ve landed in a veritable Alpine wonderland. Located on the banks of the tempestuous Lech River and surrounded by the imposing Allgäu Alps, this ancient Roman town is renowned for the clarity of its ice-cold lakes and resplendent Alpine scenery.

And while Füssen is undoubtedly one of Bavaria’s most scenic cities, is it perhaps best known for its proximity to the world-renowned Neuschwanstein Castle. King Ludwig II’s extravagant pet project ultimately cost him his life, but the legacy of old ‘Mad King Ludwig’ is one of the world’s most famous buildings. This jaw-dropping Romanesque Revival palace, perched high on a hill above the village of Hohenschwangau, now attracts more than a million visitors each year.

Neuschwanstein’s splendour somewhat overshadows Füssen’s own natural beauty, but to ignore this picturesque town is to ignore the final quintessentially Bavarian stop along the Romantic Road. From its pretty red-roofed town centre to the spectacular power of Lech Falls, Füssen proves a rewarding climax to this stunning scenic route.

Of course, many visitors choose to traverse the Romantic Road in the opposite direction – often having made their way across the border from neighbouring Austria. Whichever your preference and whatever the season, a meandering drive along the Romantic Road is an ideal way to explore one of Germany’s most spectacular regions.