Flying through late night Bangkok traffic, horn blasting, and wind flying through my hair, it’s a thrilling ride, that’s for sure. The adrenalin’s pumping as much as it would on a roller coaster.

For the first few minutes I flinch each time we weave in and out of traffic, with seemingly inches to spare, but before long the driver wins my confidence and I just go with the flow.

Three-wheeled Tuk-Tuks are Bangkok’s best known form of public transportation and still one of the best ways to explore the city, especially at night.

For the uninitiated, the tuk-tuk is essentially a motorcycle with a fully covered carriage that seats two to three people. There are no doors and entry is from the sides, or sometimes from the rear. 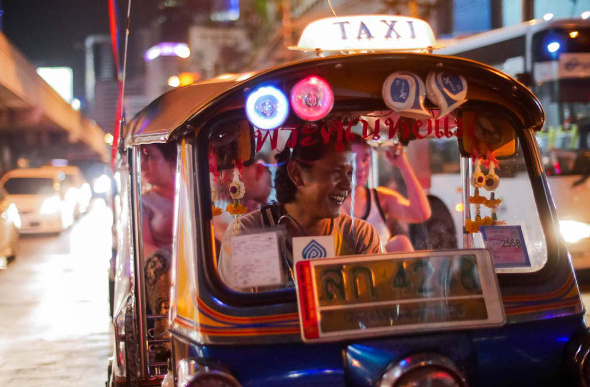 The exciting way to see Bangkok

Our tour gives us a taste of Bangkok at night, a mix of sight seeing and local food haunts.

Our first stop is Go Ang Pratunam, widely agreed as the best place to get ‘Khao Mun Gai’, the Thai version of Chicken Rice. It’s an unassuming place, on busy Phetchaburi Road, not far from two of Bangkok’s largest shopping malls, Central World and Siam Paragon.

At about half past eight in the evening, the place is heaving and it’s fascinating watching how quickly each dish is prepared and distributed to the packed tables that spread out from the small corner café to the edge of the wide pavement.

Our second course is across town through a labyrinth of streets that fly past so quickly I completely lose my sense of direction. This time we actually do mount the pavement as we head down an alleyway that’s barely wider than our tuk-tuk, and we reach our destination: Ann Guay Tiew Kua Gai.

Getting around. Tuk-Tuks And Taxis: The Best Ways To Get Around Bangkok

We alight and head down an even narrower alley behind the restaurant to meet the chefs, busily cooking up the chicken and flat noodle dish known as ‘kuay teow kua gai’, over hot charcoal burners housed inside large oil drums. 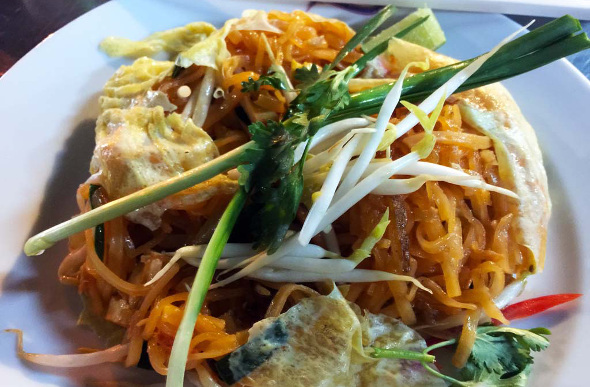 It's the best pad thai in town

Another hair-raising trip across town follows our noodle dish as we head towards the Chao Praya River to the Flower Market and just around the corner to Wat Pho; the Temple of the Reclining Buddha, one of Bangkok’s most famous landmarks.

From here we take another short tuk-tuk ride to the river’s edge, and climb about 10 flights of stairs to a small roof top bar that has arguably the best view in Bangkok, and icy cold beer. Sala Arun is an old guesthouse located directly across the Chao Praya River from Wat Arun: The Temple of Dawn.

It’s now after midnight and the streets are almost empty of traffic, so the tuk-tuks pick up speed and race back across town to our last stop for the night, Thip Samai, for Pad Thai – apparently the best in Bangkok. It’s located on Maha Chai Road in Pranakorn. 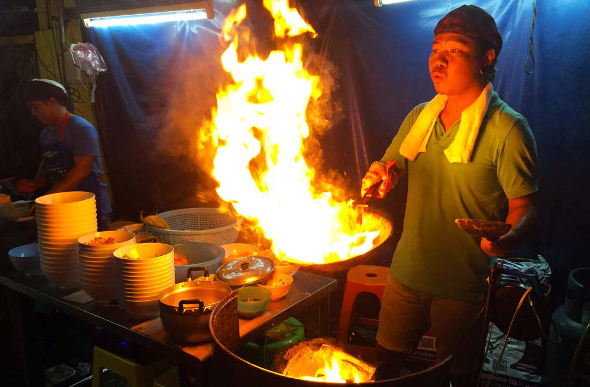 Although it’s gone midnight, the restaurant is packed, with a long line of people waiting for a table. You don’t have to wait long though, the food comes out very quickly with an efficient production line turning out dozens of plates every few seconds, served either traditionally, or wrapped in a thin omelet.

As I sit here on the pavement eating Pad Thai from a plastic bowl I can’t help thinking: I feel like a local.

Bangkok Food Tours have a Best Eats Midnight Food Tour by Tuk-Tuk which starts at Chid Lom BTS Station and ends at your hotel. Groups are between 2-16 people and tours cost 1700 Baht (A$67) per person including all food.