Next Level Whale Watching – Swim With The Humpbacks At Hervey Bay

Next Level Whale Watching – Swim With The Humpbacks At Hervey Bay

If whale watching is on your bucket list, chances are you're going to want to upgrade that goal to the next level.

They're calling it 'Whale Watching 2.0' – an immersive experience that lets you dive right in and swim alongside the graceful Southern Humpbacks in the calm waters off Fraser Island.

A select number of operators in the Hervey Bay area are offering visitors an extra special 'whale of a time' this season, allowing them to take the plunge, listen to whale songs, and capture the ultimate selfie with these giants of the deep blue. 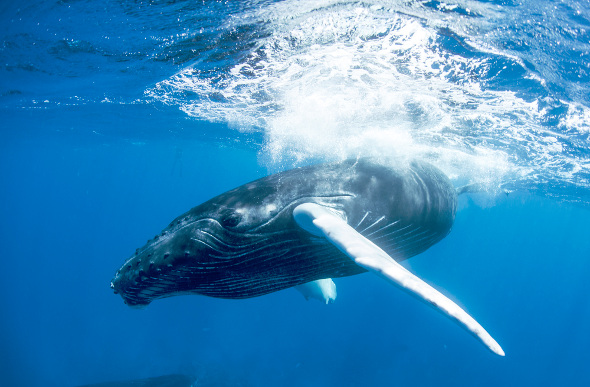 Nearly 30 years ago, local Skipper Brian Perry and his wife Jill would take friends out on the boat to watch the gentle mammals socialising in the warm Queensland waters (Jill's idea, as she's quick to remind her husband).

Who better to make a splash in the next phase of whale watching than the man who pioneered the industry in Hervey Bay all those years ago?

"One thing I can say about working with whales is that they don't argue back like Jill does," Brian laughs.

"30 years is about half a lifetime, and we've learned a lot over the years, particularly from those early days. Whale watching has changed the world and changed the way people think about whales.

"It's also given us the chance to meet lots of friends from around the world that perhaps we wouldn't have met otherwise," he says.

Skipper Brian picks his pod carefully when it comes to the whale swim experience onboard the Quick Cat II. The first swim took place just a few weeks ago, which Brian says was met with great excitement from both guests and the crew.

The third pod was the charm when it came time to dive in – the whales were curious and the conditions were just right.

“The swimmers sat on the duck board with their feet dangling in the water … and we waited for the Humpbacks to come to us," he says. 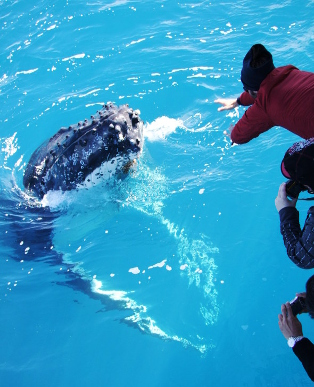 As the gentle giants approached, the keen swimmers slipped into the water one by one.

The whales were graceful and inquisitive; happily circling the boat before coming closer to say hello.

One crew member was so overwhelmed by the experience, she ended up talking 50 selfies of her open mouth and no whales!

Those who took part in the inaugural swim were discussing a second trip during the season (August – October) as soon as they climbed back on deck.

The Hervey Bay Marine park off Fraser Island is one of the best spots in the world to watch Southern Humpback Whales on their 5,000 kilometre journey from Antarctica.

The friendly ocean dwellers stop by to relax and tend to their young calves in the protected bay waters, putting on a show for anyone nearby.

Whale watching has become a must-do experience for many travellers, with some 80,000 keen spectators (and now, swimmers) jumping aboard vessels from Fraser Island and Hervey Bay each year.

"[Taking the whale watching tours] is something that you never get sick of, because every day and every cruise is different and you never know quite what you're going to get," Brian says.

"We tell all of our passengers that the Humpbacks are wild animals and they do what they want to do.  If whales jump or come up to the boat, people should be thrilled –  these animals have come up to interact because they want to.  It really makes you appreciate the wildlife."

The whale swim costs an extra $75 per person and can only be booked on the boat on the day, as it all depends on the right conditions and the safety of both guests and the whales themselves. As one of the lucky first swimmers put it perfectly – "nature can't be pre-packaged".