Why You Should Take the Kids to Cambodia

Why You Should Take the Kids to Cambodia

I fell head over heels in love with Cambodia during my first visit, almost 15 years ago, and was keen to introduce my kids, Rafferty (8) and Marlo (5), to its substantial charms.

Needless to say, when the opportunity presented itself to visit Siem Reap on a family holiday, we leapt at the chance. That's not to say I didn’t have concerns, not for their safety or what to do, more because I’d heard tourism had 'ruined' Siem Reap.

I needn’t have worried. I found the same warm people living in a city that had stepped cautiously out of the shadow of its past to move forward without losing any of its former charm or beauty. A place I think has more to offer than ever before, not only to visitors, but also to its residents.

And while Siem Reap and its visible poverty certainly challenged my kids’ world views, it also ignited their compassion and imaginations in a way no other place ever has. 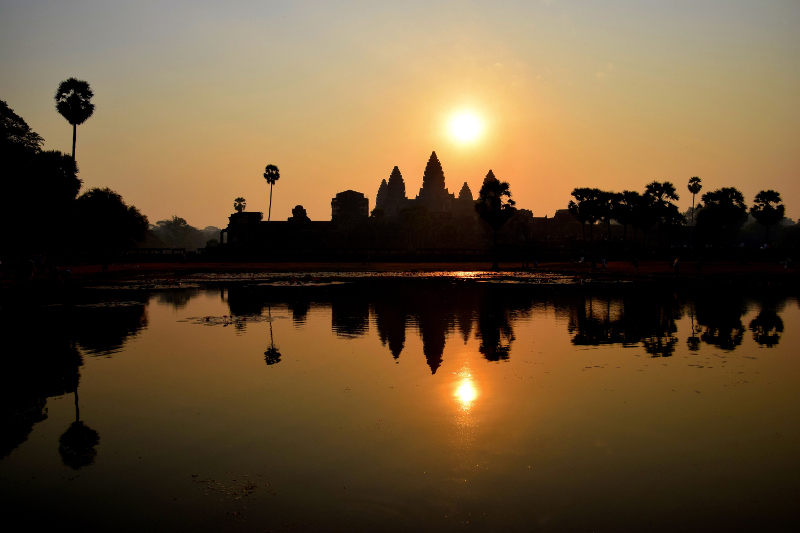 As for the temple fatigue that everyone predicted? It never happened. From their first sight of the ancient temple of Angkor Wat at sunrise, the kids were hooked.  From its hallowed halls we travelled by tuk-tuk down roads lined with carvings of gods and monsters to the 216 enigmatic faces of The Bayon, each of which my awestruck kids decided to name. I didn’t have the heart to tell them that every one was the image of a single, narcissistic former king and left them to it. 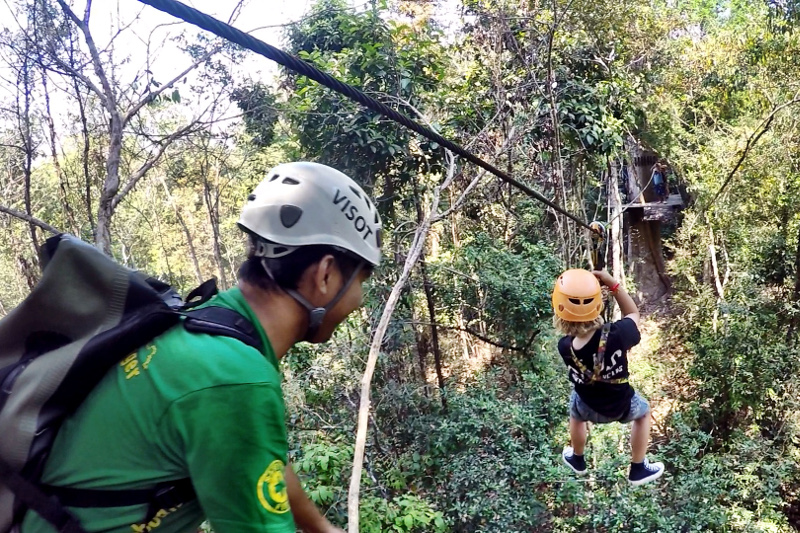 We took a break from crumbling temples to fly through a treetop ropes course at Angkor Zipline. And, though they loved it, the kids insisted they’d rather be exploring ruins, a turn of events I hadn’t seen coming. Happy to oblige, our tuk-tuk – the kids’ new favourite form of transport – delivered us to Ta Prohm. The mere sight of the atmospheric ruins, snuggled in the embrace of the jungle that devoured it, convinced my wee adventurers they were intrepid explorers forging bold new paths, and they leapt through the temple hand in hand, playing hide-and-seek in its many nooks and crannies. 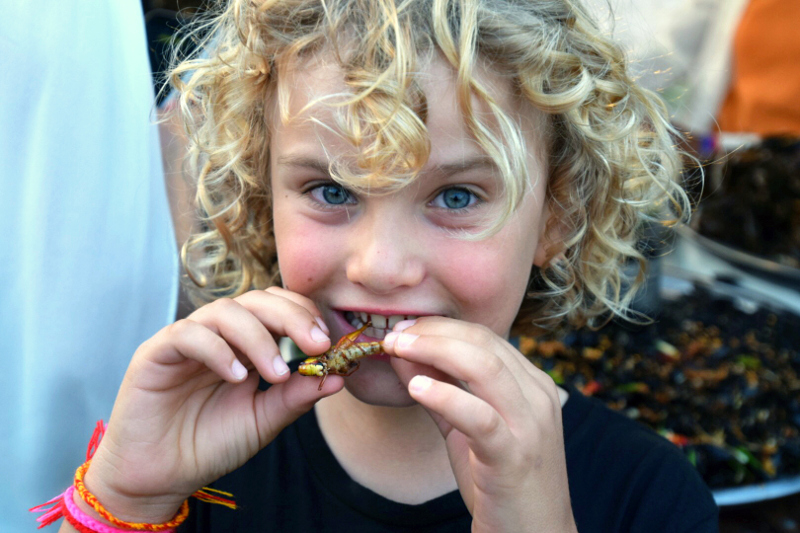 Sampling grasshoppers for a taste of something different. Image: Aleney de Winter

Later, those bold new paths would lead us all the way to dinner and while there are plenty of fabulous dining options in town, the kids had bugs on the brain. My daredevil duo, relishing their self-appointed roles as fearless action heroes, chose to dine on enormous black tarantulas, one crispy leg at a time. 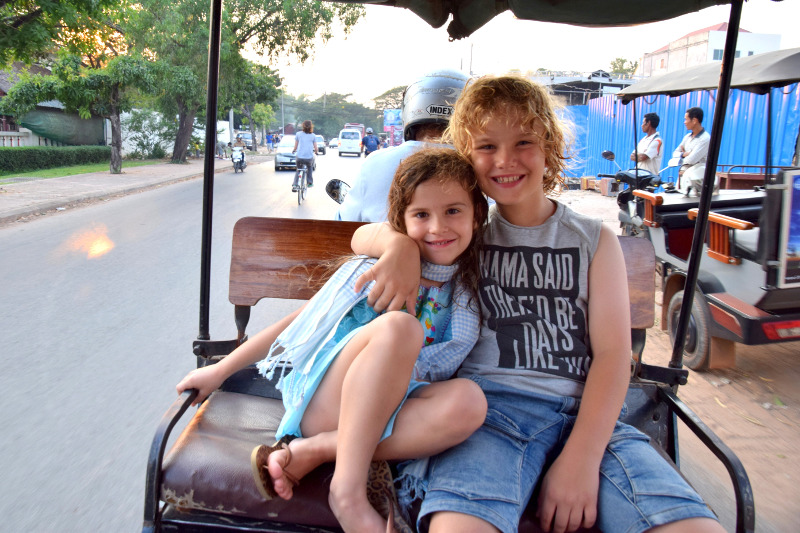 We survived the arachnid buffet well enough to travel early the following morning to Phnom Kulen. The birthplace of the Khmer empire, the mountain is home to the sacred River of a Thousand Lingas and an ancient monastery, Preah Ang Thom. There my kids experienced their first case of culture shock as we passed landmine victims and beggars. We explained why we had to say no to these clearly needy people and instead demonstrated how to assist them in more sustainable and practical ways via donations to ethical charities and a stop to give blood at the local children’s hospital. It worked because my kind-hearted kids were motivated to donate their own pocket money. 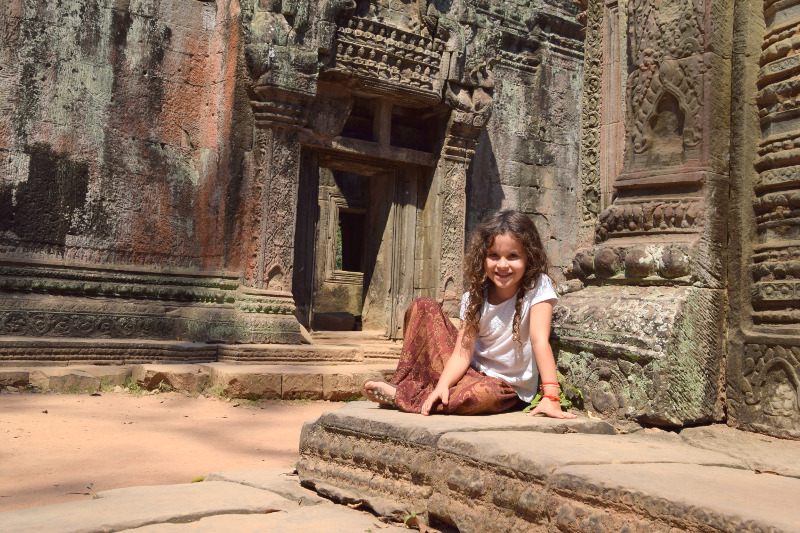 Phnom Kulen is also home to a pretty waterfall where the kids played happily with local children for an hour or so.  But the siren call of another temple proved impossible to resist. After a quick lunch of amok, a deliciously creamy fish curry, we found ourselves under the spell of the elaborate stone carvings of Banteay Srei - my daughter as besotted with its pink prettiness as my son by its statues of strapping guardian monkeys. 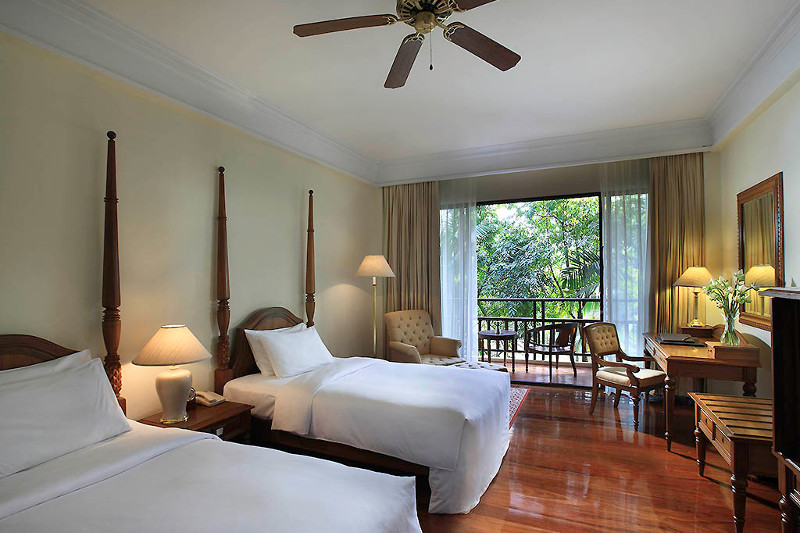 The Sofitel Angkor Phokeethra was kid-friendly and the perfect spot to stay.

After another long day of adventures we spent the evening at the kid friendly Sofitel Angkor Phokeethra relaxing by the enormous lagoon-style pool, watching graceful Apsara dancers and feasting on Cambodian-style barbecue. Back in our suite, the kids, instead of turning the TV on like they usually do, poured over guide books to choose which enchanting temple would be the first stop on another day of adventure. 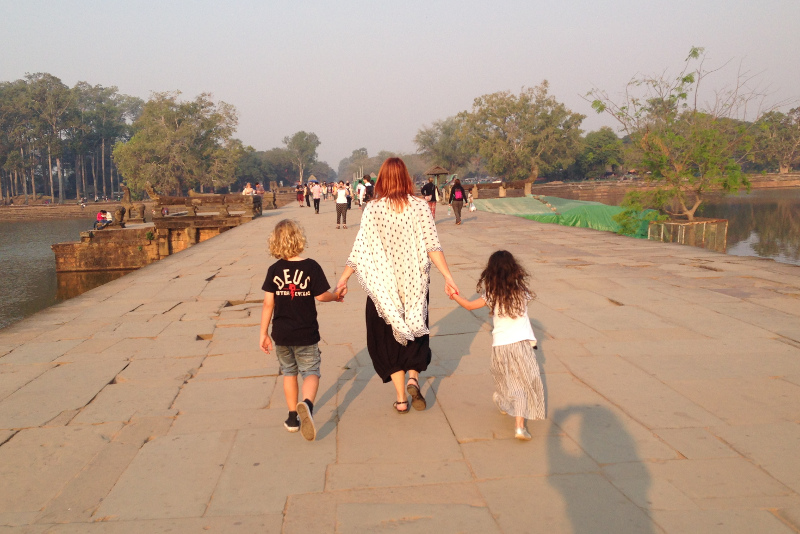 Tips for travelling in Cambodia with children

Mosquito borne illnesses are a risk. Dress the kids in light, loose long clothes and apply a child-safe insect repellent (not more than a 20% concentration of DEET).

Seek your doctor’s advice on recommended immunisations well before travel.

Caution is required with food to avoid upset tummies. Tap water is not safe to drink, so drink only bottled water.

Cambodia has come a long way in recent years but it is still a visibly poor country and it is important to prepare children for that before visiting.

Admission to the Angkor Archaeological Park is through an Angkor pass, which can be purchased for 1, 3 or 7 days. Children under 12 are free with identification.

Visit your local Flight Centre store or call 131 600 for more advice and the latest deals on travel.