There are a couple of common misconceptions about New York; the locals are rude (I can vouch they're not), the city is expensive (only if you don't do your research), there's not a tree to be seen (a concrete jungle it ain't). Another popular myth often believed is that the best place to stay is near Times Square. The jam-packed tourist district may be a city must-see, but it's not necessarily a must-stay, particularly if you're looking to get a taste of the real local life, not just the typical tourist experience.

On my recent trip to the USA I had a whole week to spend in New York and was determined not to be confined to a tiny hotel room with nothing but a bar fridge. So I skipped a stay near Times Square for a suite on the Upper West Side at the stunning Hotel Beacon. 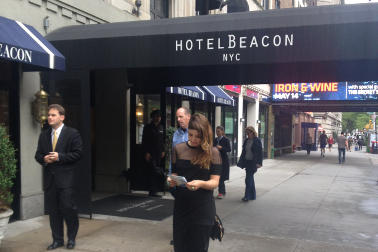 Checking my map outside the Hotel Beacon

Sitting on Broadway and just a few blocks away from Central Park, the Hotel Beacon really is in prime position. While it's a firm fixture amongst a thriving neighbourhood of proud New Yorkers, from a tourist perspective it also ticked all the boxes - a 20 minute walk to Times Square and the Theatre District, close by to plenty of restaurants and shops, only a few streets away from the coveted Magnolia Bakery and, most importantly, across the road from the Fairway Market, a supermarket to end all supermarkets. Between the market and our suite's kitchenette (there's one in every room), each day I was able to enjoy a fresh feast of my own, from granola and fruit in the morning for breakfast to pesto pasta and organic salads. After weeks of greasy pizza and fast food options, this was a saving grace of my trip – and a fine selling point if you're staying longer than a few nights and have grown tired of restaurant meals.

In addition to the kitchenette, it was the hotel room's space that amazed me - a rarity in New York and one that no doubt stems from the hotel's age.

"The hotel opened in 1929 and was built with the Beacon Theatre," said the Hotel Manager, Thomas Travers. "We actually own the whole block, and rent out the theatre and the coffee shop space around the corner."

By owning the whole block, each suite in the hotel has the advantage of a stunning view - something that the Waldorf can't even promise. From one side of the building, you can look out to see the Hudson River while the other side overlooks Central Park. It's a view that no matter how many times I saw it, I never really got used to. And even when my feet grew too tired to keep exploring New York, with that skyline view from my suite's incredibly comfortable bed, I still felt like I was, as Frank would say, a part of it.

Thanks to word of mouth, the Hotel Beacon is incredibly popular with long haul travellers and I can see why. In addition to spacious rooms and suites (ranging from king rooms right up to 2 bedroom suites), complimentary wi-fi and that stunning view, the hotel is also equipped to accommodate longer stays.

"It might not sound exciting, but guests love our brand new laundry room. Especially with our guests coming from Australia, they use it because they're usually travelling for three weeks at a time when they're in America, so they just love it when they find out we have a laundry," said Thomas.

As one of these three week travellers and with two weeks worth of dirty clothes stowed away in my suitcase, I was indeed thrilled to see the laundry and took full advantage of the shiny new washers and dryers.

But the laundry isn't the only new feature to the hotel. Despite its age, it seems Hotel Beacon is constantly being renewed and upgraded. It's most recent additions being a fully equipped fitness centre and the long-time-in-the-making Beacon Bar. Created to accommodate Beacon Theatre guests as well as hotel guests, the sleek and modern bar is an exercise in the sophisticated and functional. Its polished floors and leather finishes are suitably stylish; the strategic amount of plush seating is incredibly smart and the electrical outlets located under the bar for charging phones and iPads – an undeniably clever and modern idea. Although it's only been open a few weeks, Thomas tells me it's already experienced a few packed out moments. "The bar is particularly busy depending on who is performing at the theatre. The first Friday it was opened, Diana Krall was on at the theatre and at 6pm you couldn't get a seat at the bar."

Now there's a New York cliché that rings true. It can get crowded. That is unless you're staying at the Hotel Beacon. Then you've got space to cook up a meal, enjoy a bath, sit by the window (in freshly washed clothes I might add) and take in the view.