I was sitting on the tour bus somewhere on the Gibb River Road and Isabelle, a fellow traveller who had been to Broome before made a casual comment about the Staircase to the Moon. Until that point, I had never heard of this natural phenomenon and being the curious type I was keen to learn more. My nine day tour from Darwin with Adventure Tours through the Kimberley's ended in Broome, so I was hungry for any insider knowledge.

As I was to find out later, Broome experiences two rare natural events – that only occur a couple of times each year, and as luck would deem it, I would have the opportunity of experiencing them both in the week of my stay – an even rarer occurrence.

Here are my reflections on witnessing the Staircase to the Moon and sighting original Dinosaur Footprints. Dinosaur Footprints
Around 120 to 130 million years ago Dinosaurs called Australia home - today we know of their existence largely because of the fossilised remains of these incredible creatures. However just off Gantheaume Point, at the southern end of Cable Beach in Broome, several dinosaurs left their footprints in the mud. Over the years, this mud has solidified into rock. What makes the dinosaur footprints in Broome all the more amazing is that they're only visible at an extremely low tide. In fact the region enjoys one of the highest tides in the world – many over 10 metres.

Upon checking in to Beaches at Broome, a luxury backpacker resort, I consulted the friendly receptionist, Gemma, who advised me that indeed I was in luck – on late Tuesday afternoon just before sunset, the tide would extend far enough out to sea to reveal these prehistoric signatures.

Tuesday soon rolled around; I hired a bike to cycle the eight kilometres from the heart of the Cable Beach resort area out to the Point. Gantheaume Point itself is famous for the red cliffs that flank its walls and the lighthouse that protects boats out at sea. I arrived around an hour prior to the suggested time to take in the spectacular scenery. I had been told that the footprints weren't easy to find so I adopted a sensible approach – I would let others find the footprints for me. So I hung back, while other tourists poured down from the Point onto the mud flaps and rocks exposed by the low tide; and sure enough a commotion soon ensured at a particular location.

The footprints were immediately recognisable as being produced by an extremely large bird. Scientists believe the footprints in this area were made by a Stegosaur, Sauropod, Wintonopus, Theropod  and a Megalosaurus Broomensis.  The concept of looking at something made by another animal over 130 million years ago is an experience that is largely incomprehensible - the wonder, the amazement and the awe. This is an incredible opportunity to marvel at the wonder of nature and its mechanisms of preservation. 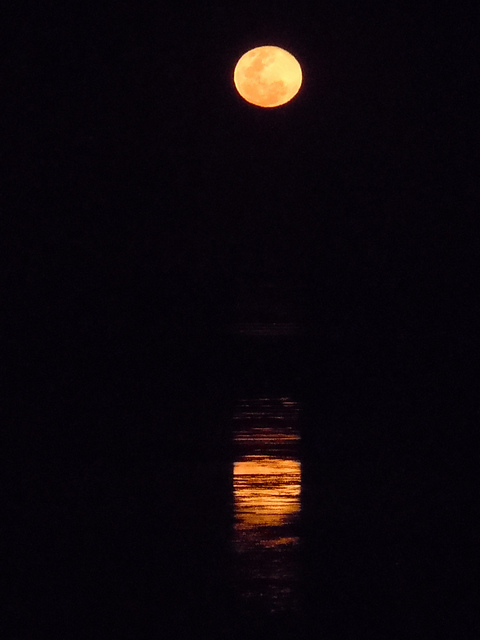 Staircase to the Moon

Staircase to the Moon
Following from the conversation on the Adventure Tour bus, I was keen to know which night I could experience the Staircase to the Moon. Again the friendly team at Beaches of Broome informed me that Wednesday and Thursday nights were the days in which the moon would reflect against the mud flaps at Town Beach giving the impression of a staircase ascending towards the moon.

I took the bus from Cable Beach around to the Broome side a little earlier than necessary to celebrate the festive atmosphere at Town Beach. There were stalls selling everything from food, through to tourist memorabilia and fragrant soups. By sunset, it felt like most of the city's population had turned out to watch the incredible occurrence. People lined along the waterfront and set up their tripods to capture the moment for posterity.

I met up with the gang from the Kimberley tour to observe the Staircase as a shared experience. It really was quite magically - as the sun set behind me in the west, the moon slowly rose from the water in front of me. At first it simply looked like a moon with a deep red intensity but then the enchantment kicked in. As the moon edged into the sky, the light reflecting off the moon caught the mud and created the incredible effect. The whole experience lasted about 20 minutes until the moon was fully launched into the night sky.

Following the moon's spectacular display, many locals and tourists hung around Town Beach to enjoy the merriment of the markets, enjoy dinner and catch up with friends - new and old.

Lyndon took a nine day tour from Darwin to Broome with Adventure Tours. To organise your all-inclusive tour through the Kimberleys or any region in Australia, contact your local Flight Centre Consultant who can arrange your holiday. Lyndon also works as an independent travel writer.