You still attract looks of envy when you are sitting in Premium Economy - just not as many as if you were sitting in First or Business class.

As the economy passengers wait their turn to board, a Premium Economy ticket allows you to skip the queue. As they make their way through the plane, and you are already seated sipping a cold non-alcoholic drink, the economy crowd looks longingly at your wider, more comfortable chair and extra leg room.

There’s no doubt First- or Business-class seating would be preferable. But the journey from Brisbane to London is measurably more comfortable sitting in the premium part of the cabin. 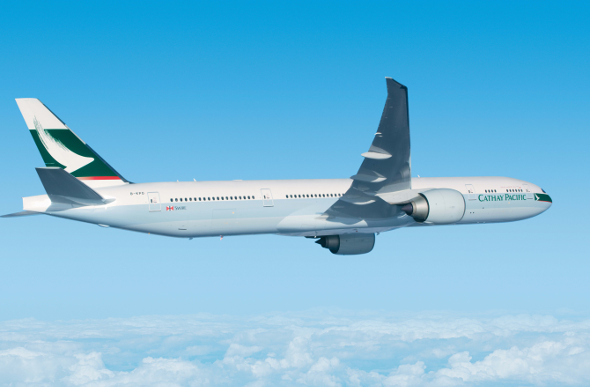 I arrived at Brisbane Airport for the first leg of my 24-hour Cathay Pacific journey, two hours before my scheduled 0050 departure. Premium Economy has a separate check-in lane and luckily it was empty, so I marched right up to the counter.

The check-in process took about five minutes and customs was almost empty, so I was through the duty-free shop and into the terminal in no more than 15 minutes after arriving.

The seating on the A333 jet in Premium Economy was in a two-three-two configuration. I was allocated seat 30C, which was an aisle seat in the front row of Premium Economy and had extra leg room. The flying time between Brisbane and Hong Kong is eight hours and 45 minutes (6,910 kilometres).

The cabin crew worked both the Premium and Economy areas, but certainly paid more attention to us. We were offered two meals during the flight - dinner once the flight had taken off and breakfast about two hours before arriving into Hong Kong.

I skipped dinner, instead choosing to try and grab some sleep. My seat had adjustable leg rests and reclined just enough to allow me to manoeuvre my rather large body into a comfortable sleeping position.

I did wake though, every time the guy in the seat next to me moved, or went to the toilet, or adjusted the lights (which he frustratingly did a lot). In Business class there definitely is more separation between the seats and what your fellow travellers do doesn’t really affect you.

For breakfast, I was offered the choice of scrambled eggs with sausage, bacon and fried potato, or chicken congee (which ironically we were told we probably wouldn’t enjoy as it really did suit local tastes).

Got a long flight? How To Survive The World’s Longest Flight With The Help Of HBO

Get to know the sky-high class system. The Lowdown On Aircraft Cabin Classes

Hong Kong Airport is easy to navigate for transiting passengers. My London flight was scheduled to leave about 90 minutes after my arrival, but was delayed by about 30 minutes.

Rather than sit, I chose to walk the length and breadth of the airport, which has great shopping, lots of fantastic eating options and a few places to grab a 30-minute head-and-shoulder massage.

The 13-hour and 55-minute London leg of the flight was on a Boeing 777-300ER. Premium Economy, with 32 seats, was full. It was set up in a two-four-two configuration and I was allocated 31E - so the middle of the four seats. There is no doubt this is the least preferred seating option as you have to climb across a stranger every time you need to use the toilet. 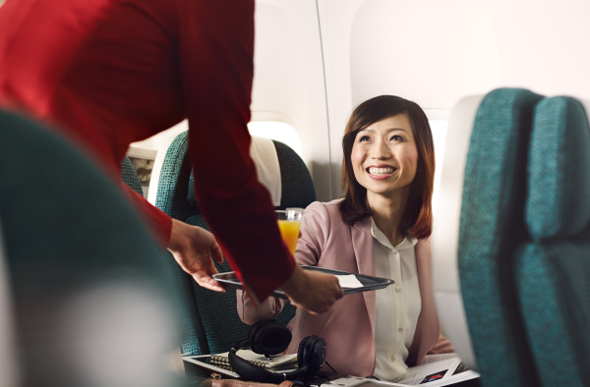 It's great value on long flightd

The in-seat entertainment system came with noise-cancelling headphones and a wide selection of recently released films and box-set TV shows. On this leg, I watched four films and a Dolly Parton at Glastonbury concert to pass the time.

It's on these long legs when you really feel the value of Premium Economy seating. A 24-hour plane journey is never pleasant, but having the ability to stretch out and sleep makes it bearable.

What you get in Cathay Pacific Premium Economy

Visit your local Flight Centre store or call 131 600 for more advice and the latest deals on travelling to Hong Kong and London.